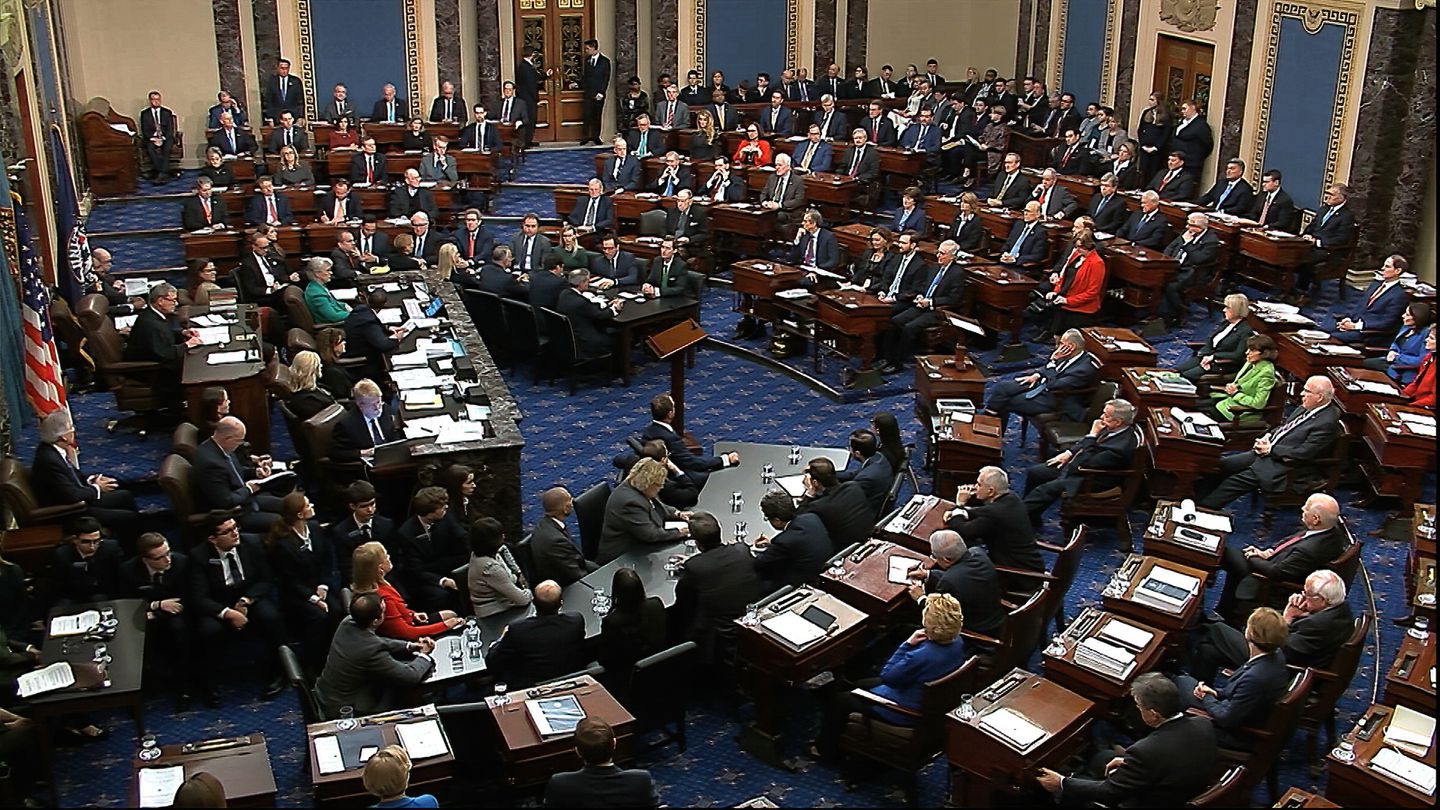 For the third time in American history, a president of the United States was acquitted by the U.S. Senate after being impeached by the House of Representatives. As expected, Donald Trump followed former presidents Andrew Johnson (1868) and Bill Clinton (1998) in being acquitted on Wednesday – with the GOP-controlled chamber falling well-short of the two-thirds majority necessary to convict him and remove him from office.

The first article of impeachment against Trump – which alleged abuse of power – received only 48 of the 67 “guilty” votes needed to assure a conviction. All forty-five Democratic senators joined socialist U.S. senator Bernie Sanders of Vermont, Democrat-leaning “independent” Angus King of Maine and Republican senator Mitt Romney of Utah in voting “guilty” on that article.

On the second article of impeachment against Trump – which alleged obstruction of congress – the vote breakdown was the same except for Romney voting “not guilty” this time, resulting in a 53-47 tally.

These historic votes took place more than a month after the House’s impeachment of Trump on a party-line vote (actually, two Democrats joined with GOP lawmakers in voting against one of the articles, while three joined in voting against a second article).

Given the hyper-partisan climate that has enveloped our nation’s capital, neither the outcome of the House bid to impeach Trump – nor the Senate trial that ultimately acquitted him – were ever in doubt.

Both were “foregone conclusions.”

Now the question turns to political fallout – both for Trump and for the Democrats who unsuccessfully attempted to have him ousted from office.

Where does the public stand? As of Wednesday, 48.1 percent of Americans opposed removing Trump from office compared to 47.8 percent who supported removing him, according to Real Clear Politics.

That, ladies and gentlemen, is definitional devision … although it is worth reminding readers that Trump has historically outperformed his positioning in mainstream media polls.

Can he do so again?

Also worth considering is that impeachment didn’t exactly captivate the American consciousness the way some on the left had hoped it might. A majority of Americans didn’t follow it closely, which isn’t surprising considering every step of the process was essentially preordained … and considering those on both sides of the partisan divide proved both intractable in their positions and unpersuasive in their arguments.

Democrats launched their impeachment campaign against Trump last September over the initial objections of speaker Nancy Pelosi – who spent months resisting pressure from the “progressive” wing of her party.

The focus of Democrats’ inquiry? The so-called “Ukrainian meddling” scandal, in which Trump was accused of pressuring the leader of a foreign government to open an investigation into one of his 2020 rivals – former U.S. vice president Joe Biden. Specifically, Trump is alleged to have pressured new Ukrainian president Volodymyr Zelensky to reopen investigations into a money-laundering scandal involving Biden’s son, Hunter Biden.

Democrats argued Trump applied this pressure by temporary withholding approximately $400 million worth of military aid from Ukraine – a nation that has fared poorly as a result of perpetual American intervention (including a 2014 U.S.-orchestrated coup that ousted its democratically elected leader).

The irony? Biden issued a very similar threat to Ukraine’s government during his tenure in office, explicitly vowing to withhold a billion dollars worth of U.S. loan guarantees if its leaders did not remove former prosecutor general Viktor Shokin from office.

Shokin was investigating the Bidens and their ties to Burisma Holdings, a Ukrainian oil and gas company.

Not only that, Biden – who was in charge of U.S. policy toward Ukraine under the administration of Barack Obama – gave the nation’s leaders a six-hour ultimatum to comply with his demand.

As we noted from the very beginning of the impeachment drama, if Democrats wanted these proceedings to have any lasting credibility then “(they) better come up with a smoking gun against the president that eclipses the brazenness of Biden’s admitted behavior.”

We also predicted Biden would suffer as a result of his party’s focus on Ukraine … which he has.

When Democrats began their impeachment push, Biden held a double-digit lead in early-voting Iowa – with 28.5 percent of likely caucus-goers favoring him. When the votes were (finally) counted in Iowa earlier this week, Biden finished in fourth place with just 13.7 percent of the popular vote.

Obviously we are a long way from knowing exactly how history will judge the Democrats’ failed bid to remove Trump from office … although the first judgment will likely come this November when Trump stands for reelection. Even then, however, the election will likely wind up being a referendum on Trump’s handling of the economy – not the Democrats handling of the impeachment effort against him.