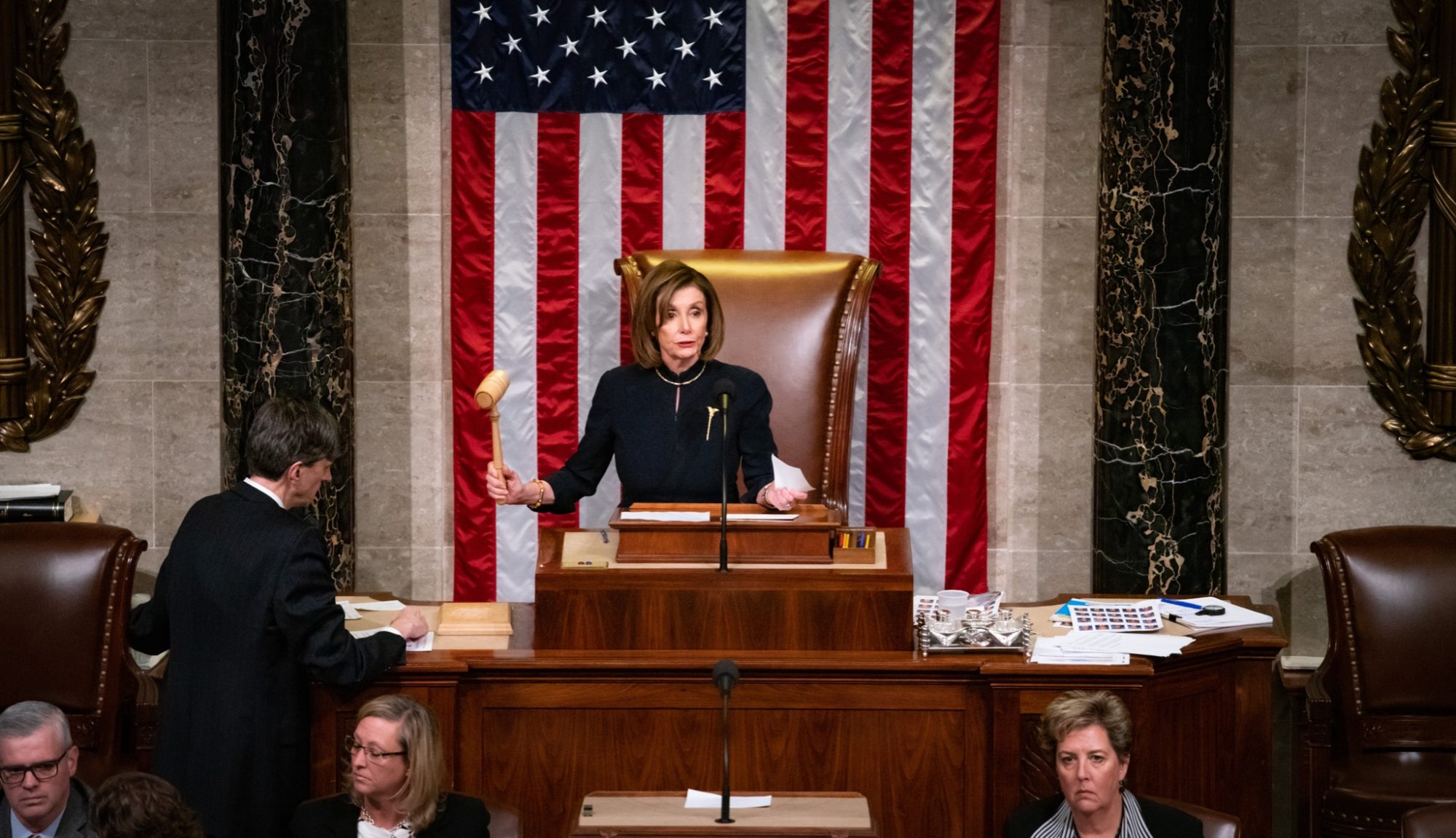 Against a backdrop of bitter partisan rancor within the chamber – and increasing ideological divergence outside of it – the U.S. House of Representatives voted Wednesday to impeach U.S. president Donald Trump for allegedly abusing his office and obstructing congress.

“No one is above the law, Mr. President,” said U.S. speaker Nancy Pelosi, who initially opposed impeachment but ultimately bowed to the liberal wing of her party and agreed to advance it.

Will her reconsideration cost Democrats politically? We shall see …

“What are the chances Pelosi and the moderate wing are playing the long game with impeachment?” mused one political analyst. “If Trump loses, they’re in power. If he wins, they can tell the left plank to pipe down and it is their fault – ultimately centering the party.”

Trump boasted of this “100 percent Republican vote” in responding to the passage of the two articles.

“That’s what people are talking about,” he tweeted. “The Republicans are united like never before!”

He also tweeted this image …

In addition to the Democratic defections, U.S. congresswoman Tulsi Gabbard of Hawai’i – a 2020 Democratic presidential contender – voted “present,” drawing a scowl from Pelosi.

“A house divided cannot stand,” Gabbard said of her vote. “Sadly, our nation is terribly divided. My vote today is a vote for much needed reconciliation and hope that together we can heal our country to usher in a bright future for the American people, our country, and our nation.”

Upon passage of the two votes (here and here), Trump became only the third president in American history to be impeached, following Andrew Johnson in 1868 and Bill Clinton in 1998. Impeachment proceedings against president Richard Nixon were initiated in February of 1974, but Nixon resigned from office prior to articles of impeachment being voted on by the House.

Both Clinton and Johnson were acquitted by the U.S. Senate and remained in office – which is the same fate expected to befall Trump (assuming Democrats decide to advance the two articles they passed to the Senate).

As of Thursday, Pelosi had yet to commit to such a course of action – arguing the GOP-controlled Senate was incapable of conducting an impartial trial of Trump.

“So far we haven’t seen anything that looks fair to us,” she told reporters following the House’s historic votes.

House leaders also delayed the selection of impeachment managers, or representatives who would serve as Trump’s prosecutors in the Senate trial – which would be presided over by U.S. chief justice John Roberts.

What sort of advantage do they hope to gain by these stalling tactics? Ideally, Democrats hope to force Senate majority leader Mitch McConnell (above) into negotiating with minority leader Charles Schumer over the ground rules for the impeachment trial – which is supposed to begin in January.

McConnell was having none of it, though.

“Before President Clinton’s impeachment trial, the Senate passed a bipartisan resolution to lay the basic groundwork,” he tweeted. “It passed 100 to nothing. I think we should repeat that bipartisan process. Why does Senator Schumer want to invent different rules for President Trump?”

McConnell cannot afford many defections, however.

For a president to be removed from office, two-thirds of senators present in the chamber must concur with the articles of impeachment approved by the House – something that has never happened in the 243-year history of the nation. While that threshold is considered a political impossibility given Trump’s monolithic GOP support, Democrats are hoping to pick off three Republican senators (at least) for a vote on the rules that will govern the upcoming proceedings – perhaps insisting on holding a secret vote regarding Trump’s removal from office.

If GOP senators can secretly vote on removing Trump from office, the odds shift dramatically in Democrats’ favor – especially on the obstruction allegation.

Nixon was also set to be impeached for abuse of power and contempt of congress when he gave up the presidency on August 9, 1974. He remains the only U.S. president ever to resign from office.

As readers no doubt recall, it was not Nixon’s involvement in any particular criminal activity that precipitated his fall – it was the subsequent political machinations undertaken to conceal the scandal that ultimately ensnared him.

Trump is accused of abusing his office by threatening to withhold nearly $400 million in military aid to Ukraine unless the country agreed to investigate ties between former vice president Joe Biden’s son Hunter Biden and Burisma Holdings, a Ukrainian oil and gas company.

Ironically, Ukraine was investigating Bursima and Biden back in 2016 – until the former vice president threatened to withhold $1 billion in U.S. loan guarantees unless it fired its former prosecutor general.

By contrast, the $400 million in military aid from the Trump administration was eventually provided to Ukraine – without the country agreeing to open any new investigations into the Bidens (or even being aware of the alleged quid pro quo, according to Trump defenders).

We have always believed the so-called “Ukrainian meddling” scandal was curious ground for Democrats to plant their impeachment flag, but after the high-profile inquiry into alleged “Russian meddling” led by ex-U.S. special counsel Robert Mueller fell flat … what else were Democrats left with?

This news outlet has never defended Trump’s conduct in regards to Ukraine. However, we have argued from the very beginning of the impeachment drama if Democrats wanted these proceedings to have any lasting credibility, “(they) better come up with a smoking gun against the president that eclipses the brazenness of Biden’s admitted behavior.”

Predictably, America’s “divided house” is split down the middle on impeachment. On the day Democrats voted, support for impeaching Trump stood at 47.1 percent while 46.5 percent opposed impeachment, according to composite polling data from FiveThirtyEight.com. Meanwhile, according to composite polling data from RealClearPolitics, 47.1 percent also supported impeaching Trump and removing him from office – but 48 percent opposed impeachment.

Those are the best numbers Trump has seen in weeks, and as we have repeatedly argued “we think it is safe to say these are charitable readings for Democrats.”

Do you think Donald Trump deserved to be impeached?

Impeachment Hold: What Are Democrats Thinking?