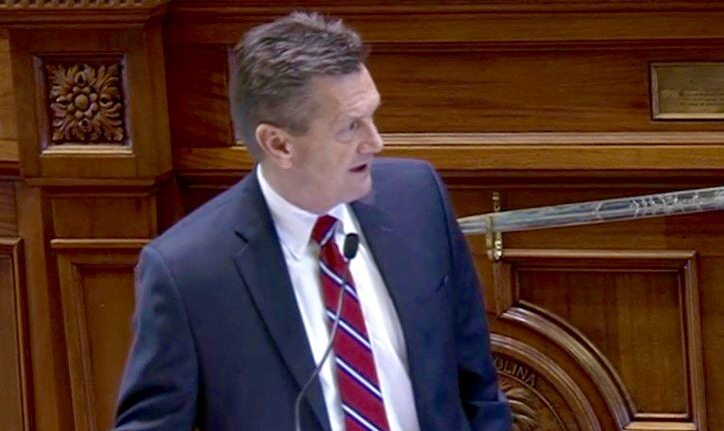 S.C. Senator Tom Davis is the most hated man inside the South Carolina State House right now … but he’s becoming increasingly beloved by a broad spectrum of supporters outside of the building.

For the second straight legislative session, the second-term lawmaker from Beaufort County, S.C. has had the audacity to suggest state government should (imagine this) stop woefully mismanaging and politicizing its infrastructure spending.  More to the point, Davis has conclusively proven South Carolina doesn’t need to raise taxes on gasoline in order to manage its infrastructure needs.

This common sense crusade has angered virtually everyone in power in the Palmetto State – legislative leaders, party officials, bureaucrats, lobbyists, crony capitalists, members of the liberal mainstream media … you name it.

All of these forces want to keep the waste and corruption going.  In fact they want to accelerate it … because in far too many cases doing so directly benefits them.

For the second year in a row, Davis is mounting a filibuster on the floor of the South Carolina Senate against a proposed increase in the gasoline tax.  Last year he successfully beat back the proposed tax increase, and he’s vowed not to surrender the podium until lawmakers agree to shelve the gasoline tax hike … permanently.

Make no mistake: This is the gas tax debate.

Support for Davis’ efforts has come from all over the political spectrum: Conservatives and liberals, Tea Partiers and environmentalists, libertarians and even a handful of establishment “Republicans.”

In addition to the heaping praise he’s received from us, the far left leader of the S.C. Coastal Conservation League (SCCL) recently wrote that Davis’s so-called obstructionism “may save the state’s transportation system.”

Specifically, he noted Davis’ filibuster “goes directly to the heart of the challenge South Carolina faces – how to restructure the agencies that control billions of transportation dollars and eradicate the provincialism and back room deals that have created the problems we face today.”

Even those who disagree with Davis have come to admire the tenacious, intelligent and principled advocacy he has brought to the debate. One has even suggested a nickname for the feisty lawmaker.

“There stands Davis like a stone wall,” one GOP Senator remarked to us last week, reprising a famous remark made about Thomas “Stonewall” Jackson during the first battle of Manassas by Confederate brigadier general Barnard Elliott Bee, Jr.

“The enemy is driving him – and he is giving them the bayonet!” the lawmaker added.

Thank God someone is …

Dirt poor South Carolinians cannot afford to pay more out of pocket.  They already pay a higher percentage of their incomes on fuel than residents of all but two other states (Mississippi and West Virginia).  Additionally, the liberal leaders trying to sneak this tax through the back door are lying about the so-called “shortfall” in infrastructure funding a gas tax hike would ostensibly address.

Here’s the bottom line: Taxpayers have nearly doubled the S.C. Department of Transportation (SCDOT)’s base budget over the last six years – yet our roads and bridges are still a joke.  Why?  Because the SCDOT remains as corrupt as ever – picking projects based on politics, not needs.

Lawmakers want to keep all that failed system going … because it benefits them.

Davis?  He’s insisting lawmakers fix the flawed structure – and then make do with the ample amount of money taxpayers have entrusted to them (roughly $1 billion in new money, on average, each year for the past seven years).

Astoundingly, such common sense is anathema to the political class in Columbia, S.C. – which has made ending Davis’ filibuster the top priority of the 2016 session.

Will they succeed?  We certainly hope not …

Tom Davis’ filibuster isn’t just about stopping a totally unnecessary gas tax increase, it’s about putting a corrupt system on trial – following the money and taking a magnifying glass to the shady deals, wasteful bureaucracy and self-serving projects lurking just under the surface of the reflexive “Fix Our Roads” chant.

It’s about one politician – at long last – finally showing some backbone and standing strong against the status quo.

Giving them hell, even.

The pages of this website are littered with tales of politician after politician – in both Columbia and Washington, D.C – who sell out their principles for the approval of the powers-that-be (including Davis’ former mentor, U.S. Rep. Mark Sanford).  In fact these ideological betrayals have become so commonplace nowadays we’re barely surprised to see even the most “conservative” politicians surrender their votes to the self-serving, free-spending, liberty-hating, taxpayer-draining establishment.

Davis has had every opportunity to do just that during this debate.  In fact he is facing inordinate pressure from all corners of the capital building to do just that.

He’s standing like a stonewall for what he knows to be right.

Jeb Bush’s “Money For Nothing”

I appreciate that Davis is ostensibly “looking out for the taxpayer”. I’d prefer we not raise any taxes but we can’t handle this continued foot dragging on infrastructure anymore.

The State Senate can’t even do a filibuster right. Ol’Strom stood on the floor of the Senate for 24 hours, 18 minutes with exactly one bathroom break (provided by Barry Goldwater who wanted to get something into the Congressional Record). If you can’t fight the fight the way the rules were written, it’s time to move on.

For the record, Brigadier General Barnard Elliott Bee, Jr. died on 22 July 1861 from wounds received the day before during the First Battle of Manassas (First Battle of Bull Run). He was born in Charleston and is buried in Edgefield. There is some debate as to whether he was cursing Jackson for “…standing there like a stone wall…” or encouraging his men by the example of Jackson who was “…standing there like a stone wall…”

Bee’s forces had been fighting since the break of day in the low ground between Matthew Hill where the Union lines were arrayed and Henry House Hill where General P.G.T Beauregard’s forces were arrayed and to where he was rushing his reinforcements. Gens Bee, Bartow and Evans had led the brunt of the fighting until their units broke and retreated behind Jackson’s Brigade.

As he ran by Jackson, Bee commented to Jackson “The Enemy are driving us”. Jackson’s response was “Then sir, we will give them the bayonet”. Shortly there after Bee rallied his troops to reform their lines and get back in the fight with this now famous utterance “Form, Form, There is Jackson standing like a stone wall. Let us determine to die here, and we will conquer. Rally behind the Virginians.”

For the record, he is buried at St. Paul’s Episcopal Church in Pendleton.

You are correct sir, good catch! I guess I was thinking about Ol’Strom’s final resting place.

“There stands Davis like a stone wall,” And he “ducked” down behind it when he voted for Toal! You have to “walk the walk” all the time Tom, not just when it suits your political ambitions.

Keep up the good work, Sen. Davis. Those politicians who think voters won’t notice if a dime or two is added to the cost of a gallon of gasoline need to be identified and exposed to their constituents. Every single new tax should be examined ad nauseum before it’s enacted.

Looks like we may have one politician with the fortitude to stand by what the people who voted for him wanted. We work hard to elect good honest conservative leaders , and for a while, they stand and fight. Then we start to hear the old, Weeee trieeeed but weee just couldn’t get the votes ,couldn’t make it work, or some other lame excuse for selling out their voters. That was the thing I first liked about Cruz. He stood down the leaders of his own party. That is what we need in Washington and Columbia.

Serious question, Rogue; do you know where Katrina stands on this one?

I really haven’t talked to her about it. She was so wound up with Jeb. I will ask.

Thank you! I am curious and have this sinking feeling that I won’t be happy with the answer. Maybe there will be a pleasant surprise, though.

Believe me , I know the feeling.

According to FITs, that’s because the Democrats are really in control.

Funny, I thought the ones who were whipped into caving to the other side were the Democrats.

Thank you, Mr Davis! Please continue to fight the good fight for us on this matter.

I admire him also for the lessons that are coming from him during his time at the podium
Stonewall is a name that suits him. Honor, Duty, Truth,
He is a South Carolina hero.

Carpetbaggers are not SC heroes.

They are to fellow carpetbaggers.

“..angered virtually everyone in power in the
Palmetto State – legislative leaders, party officials, bureaucrats,
lobbyists, crony capitalists, members of the liberal mainstream media …”
Included in that group is virtually every group and individual that would derive some benefit, either in cash or satisfying their political persuasion, from the passage of the tax bill.
A large amount of money, circulating around and attended by our elected “thieves” at the State House will ensure that Senator Tom Davis’ filibuster will be defeated.
Dishonesty and greed will prevail, unfortunately.

Great, when Davis’ filibuster ends he can spend the other 360+ days not fixing our roads and bridges. Thanks Mr. Davis!

Fuck Trump’s wall.Let’s rebuild America First.Hit it,Merle Haggard:(“I don’t think he realizes he can’t just tell somebody to do something and have it done, you know. I think he’s dealing from a strange deck.”)
https://www.youtube.com/watch?v=UodJB1tRNVE

An Engineer Explains Why Trump’s Wall Is So Implausible
http://www.nationalmemo.com/an-engineer-explains-why-trumps-wall-is-so-implausible/

Katrina Shealy will do what she always does, vote for whatever is best for Katrina. She will bargain and if she can get a better committee assignment of more awards and accolades she will vote with the special interest for new taxes.

Dumb Ass – the special interest groups are AFP “Americans for Potholes” run by the out of state big money dogs who could care less about SC and Shealy isn’t dealing with them – that’s your boy Tommy. He is playing to that audience big time! Roads will not get fixed and DOT will not get reformed – blame the Davis’s in the Senate who want even talk about reform. You must be Dave Swartz ??

I don’t know what to think about this anymore.