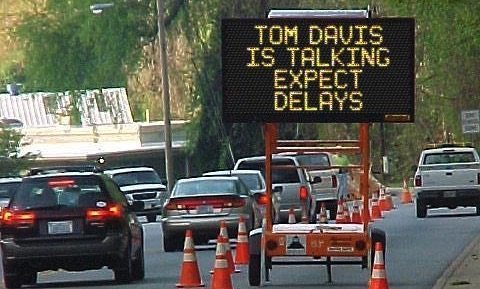 The second-term lawmaker – one of a handful of pro-free market state lawmakers – has been leading the charge against various proposals to raise the gas tax.  Davis’ argument is simple: There’s more than enough money to adequately fund South Carolina’s network of roads and bridges without raising taxes.

He’s 100 percent correct, of course, which drives the “big gubmint” legions absolutely nuts.  In fact while Davis has been staging his multi-day filibuster, even more money has materialized … although liberal lawmakers eager to pass the tax hike have refused to certify that new money.

For the second straight week, the State Senate has adjourned with Davis holding the floor … making him a lightning rod for liberal criticism (like the above image veteran Democratic operative Phil Bailey posted to his Twitter feed).

His response?  Legislative leaders have delayed certifying new money for more than three weeks … while spending the last five months blowing existing revenue ($25.7 billion of it at last count) on a host of unnecessary items.

We support Davis’ view … as do growing numbers of South Carolina politicians.

There is plenty of money for roads and bridges, lawmakers have simply failed to make infrastructure a priority.  And where they have spent money on infrastructure, they have failed to properly prioritize projects.

What have they done instead?  Tried all sorts of gimmicks in an effort to pump more money into the state’s chronically mismanaged highway bureaucracy.  First there was S.C. governor Nikki Haley’s proposed tax swap – which backtracked on her 2014 campaign promise not to raise the gas tax.  Then there was this attempted trickeration from the S.C. House (which ultimately passed a $427 million hike) – and this proposed $800 million tax hike from the S.C. Senate finance committee.

Davis drew a line in the sand and said “enough’s enough” – and so far no one has been able to knock him off of it.

Good.  It was about time someone stood up to the tax hikers. Let’s hope Davis keeps the heat on next week (whether the “big gubmint” status quo likes it or not).