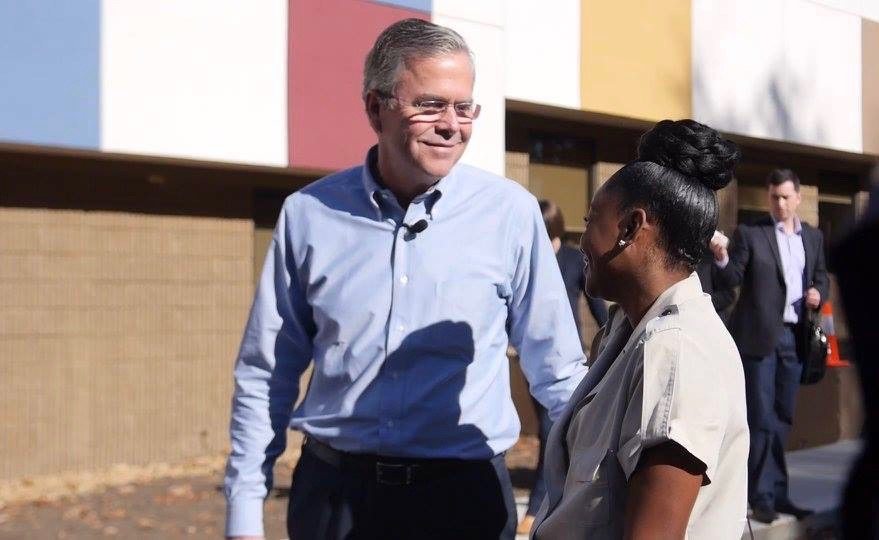 || By MICHAEL McDANIEL || South Carolina’s “First in the South” primary exploited a truth that the Washington, D.C.  elites have been suppressing and obfuscating over; This is not the “Chinese Year of the RINO.’

In another well struck blow to the establishment, Donald Trump took the Palmetto State’s hard knocks contest hands down – taking forty-four of South Carolina’s forty-six counties.  Again, his success came from voters characterized as angry, evangelical, and dissatisfied with Washington.

“Change” was certainly the centerpiece of this southern smorgasbord, and South Carolina voters dished themselves up a heaping, healthy serving of Trump-style shrimp and grits.

The media intelligentsia will be spoon-feeding the narrative for days to come, but nothing better defines the collective mindset of the electorate than the slow motion train wreck of the Jeb Bush campaign finally come to a screeching halt.

Of course it doesn’t stop there. You remember the 1985 box office hit called, Brewster’s Millions starring Richard Pryor as the inheritor of a $300 million fortune?  There was only one catch: In order to collect, he had to spend $30 million in thirty days, tell no one, and have no assets to show for it?

He should have called Jeb!

The script for the remake – “Bush’s Millions” – has just finished post-production and if you cup your ear, lean in and listen closely, a voice in the wilderness just screamed out, “That’s a wrap!”

It’s hard to imagine but the campaign to elect Bush 45 – which included the Right to Rise SuperPAC – raised over $118 million in 2015 and spent over $87 million trying to convince voters to support him. All this money fell mostly on deaf ears.  In the contests of Iowa, New Hampshire and South Carolina, Bush earned an average of 7 percent support and a total of 94,411 votes.

Let’s see if the Brewster equation fits the Bush format: $87 million in roughly 250 days with nothing to show for it. That’s a pretty good match.  Some quick ROI calculations by any average business person will expose a 73 percent negative return on investment. Not only did the Bush effort fail to win the nomination; it failed epically.

If Bush were a CEO in private industry, he would share space with the decidedly inept Dick Fuld of the now $613 billion in debt, and bankrupt Lehman Brothers.

Here’s the question, though: What does this all mean for Republican party favorites like Marco Rubio? (If you have one of those lucky eight balls that you ask a question and shake it for an answer, now might be the right time.) Eight ball answer: The Rubio train has only one wheel on the tracks and an awful bad lean to it.

On Sunday morning after the South Carolina primary, there were reports that former Republican presidential nominee Mitt Romney was set to endorse the new GOP standard-bearer.  Rubio flatly denied this on ABC’s This Week with George Stephanopoulos when asked point blank if this were true.

Given the nature of the mood of the Republican base, any campaign doesn’t need to hire a pollster to tell them that being embraced by a moderate RINO like Romney is a kiss of death.  Just ask Jeb.

Oh, by the way; remember the character in Brewster’s Millions played by the late, great John Candy?  Someone said they saw U.S. Senator Lindsey Graham wearing a gold catcher’s mitt on a chain around his neck last week while stumping for Bush.  It’s pretty hard to spend all that money by yourself and a good sidekick is necessary to help make those crucial financial decisions.

Let’s be clear though; while Bush may beat Brewster as the biggest loser, Graham in no way could never fill the jerseys of John Candy.

Somewhere across the corn fields of Iowa, Michael McDaniel takes on the political landscape with a hoe and a determination to pluck some weeds – unearthing the stories no one else is willing to tell.  He covers national and election politics with an edge and a grind – bringing stories out of the shadows and up for discussion.