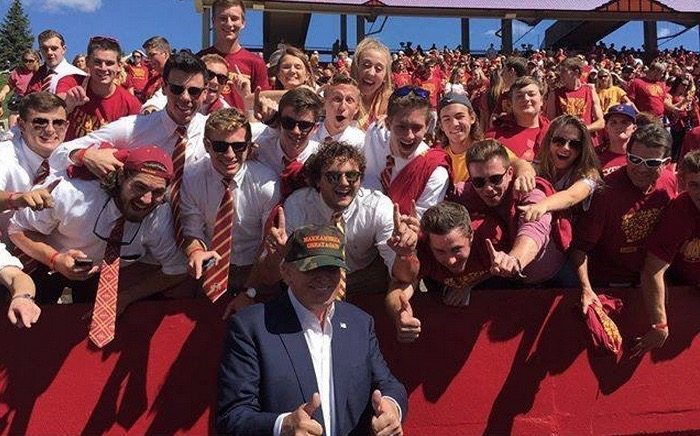 IS “THE DONALD” PLANNING TO FLIP THE SCRIPT … AGAIN?

Well, that’s not exactly true … to be precise, Trump has bashed certain segments of those populations in advancing his views on illegal immigration and the securing of domestic tranquility.

Have his criticisms found a receptive audience?  Um, yes.

Trump is the runaway frontrunner for the “Republican” presidential nomination, and several polls have him emerging victorious in a general election against the full spectrum of potential Democratic presidential nominees.  That’s a meteoric ascent under any circumstances, but it’s even more impressive given Trump’s untenable starting point in the GOP field.

His negatives were through the roof.  More than any other candidate,”Republican” voters said they would not consider supporting him in 2016.  But his outspokenness – at the expense of (mostly) Mexicans and Muslims – flipped that script.

Is “The Donald” planning to flip it again?

Trump will appear at two events in early-voting South Carolina this week which afford him the opportunity to make a potentially major pivot in his campaign for the presidency.

On Wednesday afternoon at 2:00 p.m. EDT (September 23), Trump will appear in Charleston to address the South Carolina African American Chamber of Commerce.  That evening at 6:00 p.m. EDT he will appear in the state capital of Columbia for a town hall meeting with Tim Scott, the first black “Republican” elected to the U.S. Senate since 1881.

Charleston, of course, is the site of the “Holy City Massacre” – a horrific racially motivated shooting earlier this year which inflamed racial tensions across the country (and understandably so).  Meanwhile Columbia is home to the S.C. State House – where the Confederate flag flew proudly until two months ago.

Does he play to the politically correct crowd?  Or does he exploit a potentially huge opening on the issues front …

According to the results of a Pew Center survey earlier this year, 69 percent of Americans said they wanted to “restrict and control” immigration rates – including 72 percent of whites, 66 percent of blacks, and 59 percent of Hispanics.  And that’s a fairly “left-loaded” reading of the question.

That means the issue Trump has used to galvanize GOP primary support has the potential to galvanize black voters as well.

We all know Barack Obama‘s presidency has been a disaster for black Americans – and his mass amnesty provisions (which became law after the latest “Republican” capitulation) will only hasten their economic deterioration.

“The obvious question is whether there are sufficient jobs in the low-skilled labor market for both African-Americans and illegal immigrants,” wrote Peter Kirsanow, a black attorney on the U.S. Commission on Civil Rights in a 2013 letter to the Congressional Black Caucus. “The answer is no.”

He’s not the only one who thinks so …

“Mass immigration and amnesty puts African-Americans from all walks of life out of work and suppresses wages, causing them to compete with aliens willing to work in poorer working conditions for cheaper pay,” the Black American Leadership Alliance noted in protesting a 2013 immigration bill supported by, among others, liberal U.S. Senators Lindsey Graham and Marco Rubio.

Unlike Graham and Rubio, Scott voted against that legislation.  Think that will come up during his town hall chat with Trump?

One veteran Washington, D.C. consultant told us months ago they could sum up Trump’s general election viability in three words.

But if Trump can begin staking out the roots of such a strategy we could be looking at the most ingenious example of political triangulation in American history.