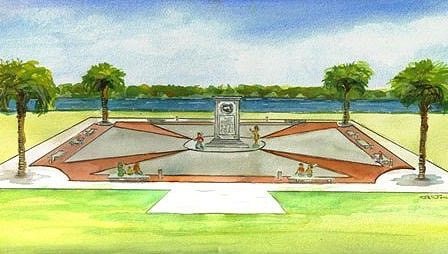 || By FITSNEWS || History moves fast … and judging by the contemporary debate over the Confederate flag, it’s also quickly forgotten.

(See HERE and HERE for what we mean by that).

Anyway, South Carolina lawmakers are on the verge of voting to remove this controversial banner from the north lawn of the S.C. State House – which we support and believe to be an appropriate response to last week’s horrific, racially motivated shooting at the Mother Emanuel AME Church in downtown Charleston, S.C.

There, nine black parishioners – including S.C. Senator Clementa Pinckney, the church’s pastor – were gunned down by Dylann Storm Roof, a 21-year-old white supremacist.

Five years ago, things were moving in the opposite direction …

Not only was there zero discussion about the flag (or the tens of millions of tax dollars being spent on a Confederate submarine), but flag supporters were pushing to have a new “Secession Monument” on the grounds of a government-subsidized naval museum in Mount Pleasant, S.C.

Specifically, the Sons of Confederate Veterans’ South Carolina division wanted to install the monument – an 11.5-foot monument at the center of a 40-foot-by-40-foot plaza modeled after the “Southern Cross” – at the Patriots Point Naval and Maritime Museum, which has received millions of dollars in taxpayer funding.

Patriots Point’s board – a government entity – deadlocked 3-3 on whether to permit the monument.

After that idea failed, North Charleston, S.C. mayor Keith Summey tried to bring the monument to his city (proposing to locate it in a government-run riverfront park) – but he ultimately withdrew his idea.

Like Summey, we don’t believe secession is a dirty word … in fact in light of recent federal overreach (which imposes on the liberties and pocketbooks of all citizens), we’ve gone so far as to entertain the notion ourselves.

Of course in so entertaining, we had this to say …

… as we’ve noted several times in the past, there is a racial stigma associated with the notion of secession, which is unfortunate but completely understandable when you consider what motivated South Carolina to secede from the Union way back in December 1860.

Ergo any plan (to secede from the Union) must be based on a declaration of universal human rights, something along the lines of a new government pledging to “make no law discriminating against citizens on the basis of gender, race, creed, color or sexual orientation.”

In other words, contemplating a future secession based on individual liberty is vastly different than embracing one based on liberty’s suppression.

And while this website maintained a longstanding indifference to the presence of the Confederate flag on government grounds, we consistently rebuked taxpayer expenditures on Confederate-related projects (most notably the H.L. Hunley submarine).

“The fact that one red cent of taxpayer money has gone toward funding any of this nonsense should make taxpayers’ blood boil,” we wrote two years ago.

In fact we hope the latest furor over the flag will put the kibosh on any further such spending.  Furthermore, we hope lawmakers will eventually take the Confederate Relic Room – the government-run museum where they are talking about moving the flag – and turn it over to the appropriate private sector entity.

Museums – Confederate or otherwise – are simply not core functions of government.

The Underwear Police Crack Down On The Confederate Flag

Please, Dear Lord, give us the wisdom to stop spending money on monuments and the like.

Surely we have better uses for the money, and if not, send it back to the taxpayer.

I say sell the ones we have now. Plant grass and be done with the lot of them all!

Just sell the property with the statues on them. Let the free market determine what to put there.

Good luck finding anyone who would want them.

OK. We get it. It was the banner of a people who fought and bled and died for their noble way of life, their home. their right to self determination and their economic independence—AND THEY OWNED SLAVES. You can’t just skip over that part! And you can’t create a laundry list of “good” things that will ever make that one fact justifiable.

Long before sucession or the war, all states that remained Union had abolished the institution of slavery. Those in the Confederacy had not. That was the bone of contention–the real cause of the war– the entry into the United State of new states as either free or slave, maintaining the balance of power between states that allowed the ownership of one human being by another. It is not an argument over what % of the population actually had ownership of human chattel, but of the institution. This flag was only ever claimed by those who wished to remain, and allow new, slave owning states by government fiat.

“Long before sucession or the war, all states that remained Union had abolished the institution of slavery.”

Not true. Slaves were still held in Kansas, Missouri, Kentucky, West Virginia, New Jersey, Delaware, Maryland and even Washington, DC until the 13th Amendment was passed, well after the war. Union, all.

I think the issue of slavery, of course, was the primary reason for the war for the South. However, since slavery was still legal in many Union states it obviously was not the primary motivation for the North. I believe preservation of the Union was primary, slavery ranked no better than 2nd.

Slavery was the primary cause of the South’s secession.

The primary reason for the war for the South was because they were effing being invaded.

And why were they being invaded Goldie?

Lincoln said it was to “preserve the Union”.

Genius Goldstein, the people voting to do the seceding, the South Carolina secession convention, on Dec. 24th, 1806, four days after adopting the actual Ordinance of Secession, published its Declaration of the Immediate Causes Which Induce and Justify the Secession of South Carolina from the Federal Union. This document is unequivocal in its multiple assertion that the cause of secession was to preserve the institution of slavery within SC. https://jubiloemancipationcentury.wordpress.com/2015/06/23/why-did-south-carolina-secede-from-the-union-in-their-own-words-to-protect-their-states-rights-to-maintain-slavery/ You can take your BS someplace else.

Long before sucession or the war, all states that remained Union had abolished the institution of slavery. Those in the Confederacy had not.

You just took the all-time lead for FITSNEWS posters for packing inaccuracies in a post. “Sucession” was just a bonus.

Sorry GT. You held the belt for a long time, Hoss…

But we willingly skip over the fact that four UNION states remained slaveholding until AFTER the end of the war….

I’m adamantly against flying the flag on public property, by you are mistaken about the non-Southern states being free of slaves still being held as property after the end of the war. That is simply not true. As others have pointed out to you in their comments.

Absolutely right. My statement was much too general and inaccurate and the issue of W. Virginia, the border states, etc., make it much more complicated than that. I’ll revert, then, to two points:
1) The states (not all but most) who fought under this flag believed it was their right to hold men, women and children in slavery; and
2) They lost.
I have to remember this is a more nuanced and savvy crowd than most blogs. Thanks for keeping me honest.
And TBG–really? GT holds an emeritus position. He will never be bested.

EXACTLY. I say we close the statehouse too and sell it to whatever private entity wants it. You think I want MY tax dollars paying some guy to cut grass on some PRIMO real estate in downtown Columbia?? Sell that shiz, then refund me my .50 share. I don’t see “building and maintaining statehouses” in my constitution.

Why isn’t there a monument to honor the obedient slave?

You mean the taxpayer?

It’s big time CYA for all these good ole boys. Keith Summey pursued this monument and called Dot Scott of the NAACP a nut for opposing it.

“In other words, contemplating a future secession based on individual liberty is vastly different than embracing one based on liberty’s suppression.”

Yes, but rest assured there are many that have an agenda and that will always tie the concept secession to the Confederate flag, slavery, etc. et al

While it’s frustrating & their attempts are largely successful, the underlying good news is there is a reason why they are so afraid of secession…and it’s not because everything is hunky-dory in this empire of ours.

….there is a reason why they are so afraid of secession…and it’s not because everything is hunky-dory in this empire of ours.

I need that for personal validation!

I don’t see a call for secession in any of that, pogo.

“we’ve gone so far as to entertain the notion ourselves.” its just before the highlighted large quote. the hyperlink in my quote isn’t there but it is in the article