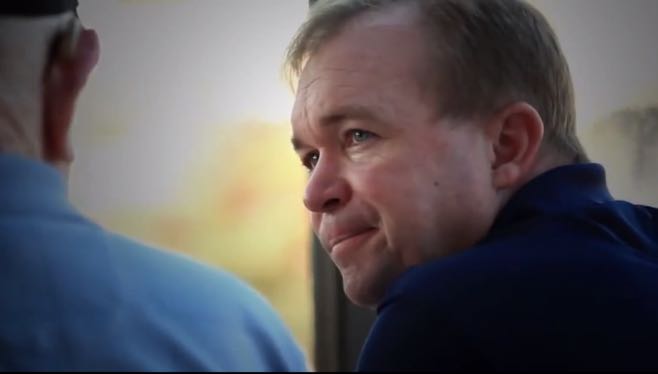 We’re referring, of course, to the “conservative” endorsement of another liberal -“Republican” Paul Ryan – as the next U.S. Speaker of the House.

You know, this guy …

Leading the “conservative” charge for Ryan?  South Carolina’s own Mick Mulvaney.  Not only did Mulvaney vote for Ryan on a secret ballot of the so-called “House Freedom Caucus,” but he used his influence within the group to sway others to Ryan’s side.

This is the same crap Mulvaney pulled back in January – insider moves that helped reelect liberal U.S. Speaker John Boehner.  It’s also the same crap he pulled this summer during the debate over “Obamatrade.”

We called Mulvaney out on both counts … but it’s clear at this point he hasn’t learned his lesson.

At a time when America needed the U.S. Congress to undergo a radical, transformative change – Mick Mulvaney handed over the keys of the “conservative” kingdom to the GOP establishment’s hand-picked goon.

And another sellout – U.S. Rep. Mark Sanford – went along with him.

We’re sure Mulvaney has an excuse.  In fact we’ve become all too familiar with his excuses.

But he wasn’t sent to Washington, D.C. to bend over for the status quo and make excuses – he was sent to Washington to change the culture, to stop the excess, to stand up for taxpayers and to stand against the radical agenda of Barack Obama.

That means never supporting “Republicans” who kowtow to that agenda …

We’re used to watching the GOP establishment sell out to the Washington insiders.  That’s why we gave up on the party years ago.  But this latest development – of “conservatives” caving to the GOP – is simply intolerable.

And Mick Mulvaney has become the poster boy for that betrayal …

Beginning with his career in the S.C. General Assembly back in 2006, this website has expended considerable bandwidth praising Mulvaney – and bashing his enemies.  And based on his first two terms in the U.S. Congress, we believed he was the sort of leader who could drive the GOP to the right in Washington – while emerging as a long-overdue prospect for consistent, conservative leadership at the statewide level in 2018 and beyond.

Shame on him.  And shame on anyone who continues to fall for his excuses.