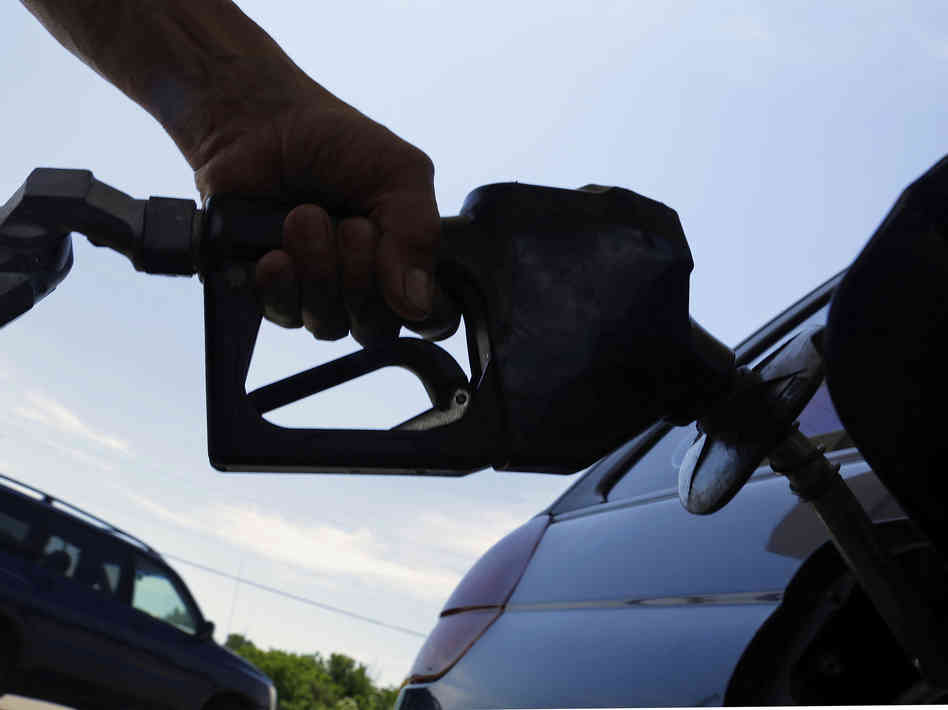 “NO ONE FIGHTS HARDER FOR CHARLESTON ROADS”

Charleston, S.C. mayoral candidate Leon Stavrinakis voted against a gas tax increase as a Democratic member of the S.C. House of Representatives earlier this year – a vote that’s now being held over his head by a fellow fiscal liberal.

Local businesswoman Ginny Deerin has been wearing Stavrinakis out over the vote … arguing it showed a lack of commitment to addressing the Holy City’s infrastructure issues.  Deerin is running against Stavrinakis on a platform aimed at addressing those issues.

Now the “Republican” author of the gas tax bill – S.C. Rep. Gary Simrill – is weighing in on the issue.

“I want to clarify that there was no funding for completing I-526 or to address Charleston’s flooding problems in this bill,” Simrill said. “Leon made clear to me he could not support a bill that did not help Charleston address its current and future traffic problems and that he planned to amend the bill.”

Stavrinakis did that, although according to Simrill his efforts to change the legislation to allow “Charleston to move forward with 526 and other local needs” was unsuccessful.

Thank God for that … Interstate 526 is the classic transportation boondoggle – exactly the sort of wasteful project that leaves real infrastructure needs unaddressed.  We oppose it every bit as vigorously as we oppose a totally unnecessary gas tax hike on South Carolinians who already pay a disproportionately high percentage of their income on fuel costs.

Nonetheless, according to Simrill “no one fights harder for Charleston roads” than Stavrinakis.

We’re not going to argue the point … we will, however, argue whether “Charleston roads” really need fighting for.

Not long ago, a powerful state Senator said lawmakers in Columbia, S.C. had been “force feeding asphalt to the coast, while the Upstate and many rural areas starve.”

He was – and is – absolutely right.

Stavrinakis didn’t oppose a gas tax hike on principle, he opposed it because he didn’t believe the new levy routed enough spending to his own backyard.  And now Deerin is bashing him for it because she wants to perpetuate the fiction that only tax hikes can “fix” our state’s infrastructure issues.

Our view?  A pox on both their houses.

We’ve said it before, we’ll say it again: South Carolina has the money to cover these costs.  And even if it didn’t, it has assets it can sell to raise the money.  And beyond that, let’s not forget it’s increased funding to the S.C. Department of Transportation by more than 80 percent over the last four years alone.

LOL. Ginny Deerin is a moron.

You state that you “vigorously oppose a totally unnecessary gas tax hike” because South Carolinians “already pay a disproportionately high percentage of their income on fuel costs.” That statement is as misleading as it is stupid. Because of the low overall income of South Carolinians, and the abysmal rate of income growth, compared to most states we pay a disproportionally high percentage of income on practically any product we buy. But heaven forbid that our leaders favor an increase in the minimum wage or favor unions–two examples of policies that might raise the income level..

Fits,as most of his readers, has

Roughly translated that means screw the middle and poor classes and supporting policies to increase the wealth of the already rich( a group Republican pollster Frank Luntz told them sounded better if referred to as ” jobs creators,”although few of the wealthy have anything to do with such).

He’s about as Conservative as you are intelligent…In other words: He’s a lair…and you’re a Fucking Lockstep, Cliche, Robot Dumbass.

The idle rich – and the just plain idle -have made out like bandits under your lord-god-Obama…while the producers – and our families- starve…you stupid Mao-ist piece of shit.

Wages don’t matter if you don’t have a job. SC has the second highest year over year percentage jobs growth of any state 9 3.2%. Also the 3rd highest increase in non farm payroll jobs for September, a month in which 27 states had declines. SC also had the largest monthly decline in unemployment for September.
http://www.bls.gov/news.release/laus.nr0.htm

I have been using this link that Fitsnews use to use the data looked bad, but now that South Carolina’s economy has improved, he never uses it any more.
http://www.bls.gov/lau/ststdsadata.txt

I imported Jan 2011 and Sept 2011 data in to Excel an compared the states improvement since Haley entered office.
Results:
% Job growth —- 5th highest in the nation at 9.88%. Behind only Utah, Nevada, California and Idaho. SC is highest east of the Rockies.

Improvement in the employment / adult population ratio — 10th best at +1.8%. That bucks the trend increasing number of retirees and the disproportionate number moving to South Carolina. South Carolina beats the entire Southeast region.

Here’s the skinny – OK???
I’m coming down to Columbia tomorrow to see a couple of bands at some pub on Howard street (think the club is “Fox” something or other…..)
Main reason is because the main show is “Reverend Payton and His Big Damn Band”. I saw the band back in April in Asheville and became a follower.
There was supposed to be a Blues Concert in some park (Martin King Park??) but has been canceled due to the flooding…The few bands that care to be there will be there are to help get money for the flood in the Columbia area.
I don’t give a rats ass what “Bible Thumper” is posting because he/she/it is the biggest ass-kisser for “Queen Namrata there ever has been but for what it’s worth, me and a buddy from Spartanburg will be there tomorrow because Reverand Payton ‘s Band can’t be topped
Bible Thumper:: Have you got the balls to meet me at the “Fox” on Howard street around 2:00 PM tomorrow so we can have a meeting of the minds?????
Show up or shut up…..is what I say……

Not a bit surprised at types like you……..Nothing but talk and no action—
I knew it all along…………..

All talk, yet your panties are all scunched up, Will.
I recognize your anonymous jabber. We’ve done this before.

Fact is I’ll be there tomorrow and your cowardly ass won’t…………….
Break time is over……go back to licking Queen Namrata’s hooker boots…..

Fact is Will Folks likes that type of music, not Sparkle. Will Folks lives in the Columbia area, Sparkle doesn’t. And Will Folks talks trash, this sounds like what you say to Kenny Bingham, but you never backed it up.

What the fuck do you think I like – Dueling Banjoes?????
I’m coming down to Columbia tomorrow – no shit….Will Folks wouldn’t know REAL blues if it bit him on the ass..the fucker’s from Columbia what do they know about Blues in Columbia????
But some people in Columbia care enough to have a blues concert so I’ll give them that—
The Blues Concert was SUPPOSED to be at Martin Luther King Park but has been canceled due to the flood situation. The line-up WAS supposed to have a band from the Spartanburg/Union area featuring one of the best Blues harmonica players in the south (Millbilly Blues) but they are going to be no-show (they’re great and I’ve had beers with them bunches of times at the Nu-Way here in Spartanburg). The line-up was supposed to start up at 1 PM but now they have moved the show (condensed) to a bar on Howard Street starting at 3 PM with Reverend Payton (best damn “white” “roots” band today) They are up here in Asheville tonight but me and a buddy decided we’d grace Columbia with our presence – I didn’t learn about the change in the schedule and location till last night.
Fuck it, we’ll be there for the party and to see the best white blues/roots band on the circuit today (and maybe a decent hamburger – if there’s one to be had in Columbia)
Any other dumb-assed suppositions????

Well thanks for the friendly invite. But if we do ever have a meeting of the minds, I’ll leave half of mine at home to even the odds.

A decline in unemployment is always welcome, but that does not change the overall picture. SC’s median household income is sixth from the bottom among the fifty states. At $44,929 per year, it is nearly $9,000 below the national average. That’s the whole point of my post–we certainly need more jobs, but we need good-paying jobs,(think raising the mind minimum wage, think unions, think better education, better infrastructure) otherwise we will continue, compared to other states, to “pay a disproportionately high percentage of our income” on everything.

We are behind on per capita income, but I’m interested in if we are catching up, not how far behind we are. It is harder to get good information about wage growth on a state level. Personal incomes has been rising in SC faster than the nation and the southeast region, but it is hard to factor out our faster population growth. Incomes and wages are not the same.

The problems South Carolina has have deep historical roots. We are behind. My point is to show that there is progress being made. As the job market recovers and tighten, wages will rise. Wages are the last thing to recover from a recession.

You support a minimum wage hike and Unions, I support a favorable business environment, that includes education and infrastructure investment.

“….let’s not forget its increased funding to the SC Department of Transportation by more than 80% over the last 4 years alone”

I believe your piss poor math skills have been noted before. The actual increase is 63% which is still a helluva lot of our money NOT being spent on the numerous pot hole laden roadways and crumbling, decrepit bridges.

Here is an idea, let’s take the $120 million that the SC Ports Authority wants to keep (left over funds from the $300 million allocated for the Charleston port deepening project) and instead of building yet another useless terminal, use the $120 million to begin fixing the dam roads/bridges. The rest of the funds would come from the SCDOT.

Under no circumstances should the taxpayers get stuck with the the tab (and taxes) to fix the roads and bridges. We must demand accountability, transparancy and fiscal responsibility from our so called elected officials.

Stavrinakis believes the uppermost role of politics is to bring home the pork. Second most is to make himself look good. After those things are accomplished, I don’t think he cares about much else.

Leon is full of shit. But at least he voted against what an overwhelming majority of SC voters are against; raising the gas tax.

Obama – in effect – imposed a tax of more than a $1.50 a gallon for most of 7 yrs. if you compare Obama gas prices to the avg. price for 8 years under Bush…

So STFU about gas prices. You have no credibility in the matter.