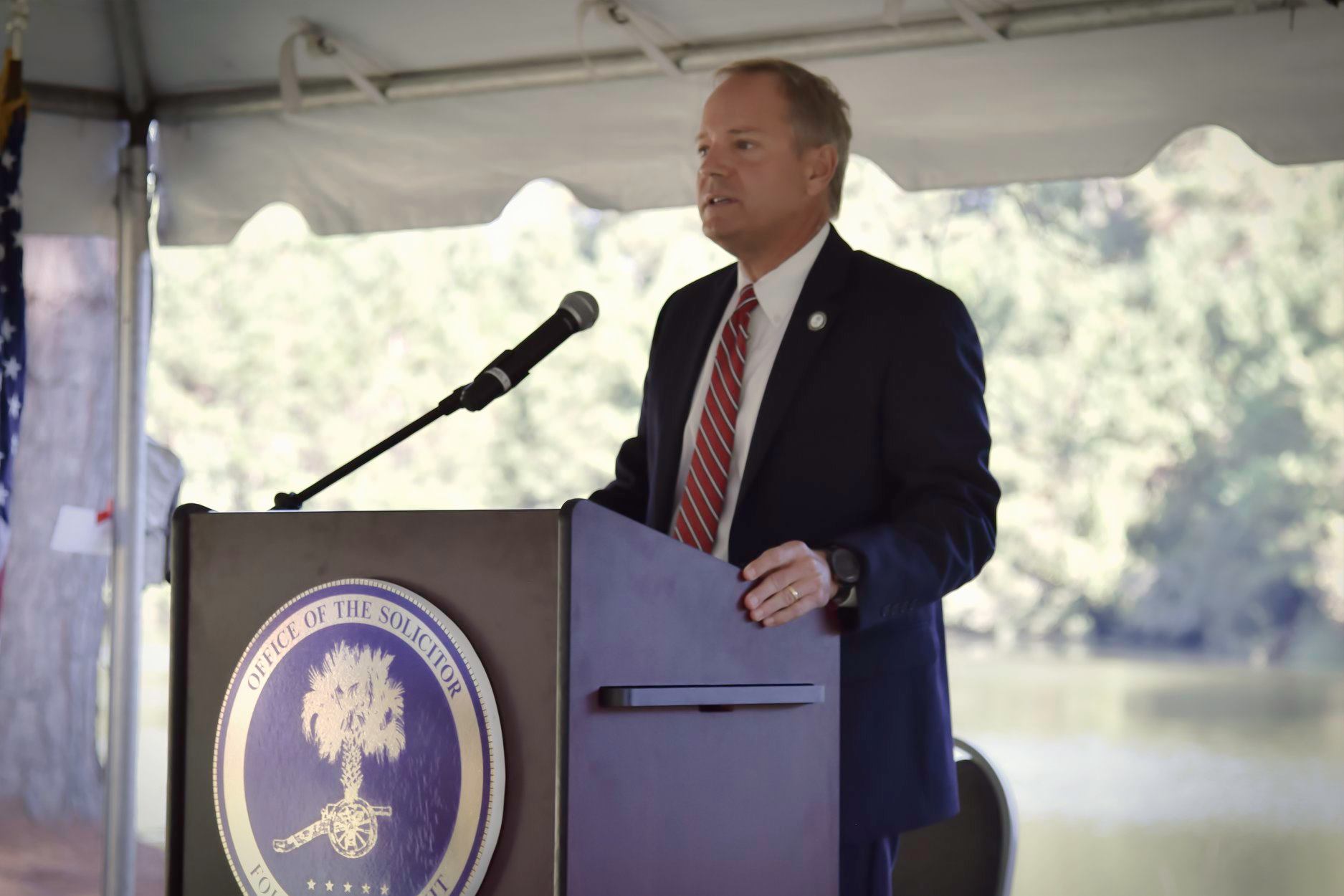 The joint statement (.pdf) slammed “some media outlets” for publishing what Keel and Stone called “unfounded and ill-informed speculation” and “unsubstantiated assertions.” The statement appears to have been issued in response to recent criticism of Stone’s investigators and how they comported themselves in the immediate aftermath of the brutal June 7, 2021 double homicide which claimed the lives of 52-year-old Maggie Murdaugh and her son, 22-year-old Paul Murdaugh.

Neither Keel nor Stone have identified the media outlets referenced in their release. Nor has S.C. attorney general Alan Wilson, whose office reportedly approved the joint press release.

Shortly after SLED released its statement, Stone cranked it out on his social media pages, claiming it was “setting straight the erroneous news media speculation regarding the fourteenth circuit solicitor’s office role in the Murdaugh investigations.”

Did it, though? Or did the joint statement from Keel and Stone succeed only in raising fresh concerns about this “rogue” solicitor’s involvement in this still-unfolding saga – highlighting Stone’s staggering lack of judgment in failing to immediately recuse himself from an inquiry which, from its very first moments, zeroed in on one of his men?


To recap: Maggie and Paul’s bodies were discovered by disgraced attorney Alex Murdaugh (Maggie’s husband and Paul’s father) at the family’s hunting lodge near Islandton, S.C. As I reported at the time, Paul Murdaugh was killed by a pair of shotgun blasts – one to the chest and another which struck his arm and head. Maggie Murdaugh was reportedly shot and killed by a semi-automatic rifle at or around the same time her son was killed.

Shell casings were reportedly found around her body …

Ten months after the killings, police have not arrested anyone – nor have they identified anyone as a suspect in connection with the case. Sources familiar with the probe say it has made significant progress, however, and that arrests are imminent.

Within forty-eight hours of the shootings, FITSNews was first to report that Alex Murdaugh – who at the time was a badge-carrying assistant solicitor in Stone’s office – was a “person of interest” in connection with the murders. That information has since been confirmed by one of his own attorneys.

Since then, things have escalated. Three months ago, we exclusively reported on the existence of physical evidence tying Murdaugh to the crime scene. Investigators have yet to disclose the nature of this evidence, although it appears to have been the impetus for Stone’s decision to belatedly recuse himself from this case on August 11, 2021.

Which, frankly, is something he should have done the moment the 9-1-1 call came in from the crime scene ..

Just three days after a brutal double homicide, I published an exclusive report previewing the potential turf war brewing as to “which prosecutorial agency will handle any charges” related to the homicide investigation.

“The crime scene officially falls under the jurisdiction of Stone – who took office in 2006,” I noted. “However, there are questions as to whether Stone – who is said to be actively involved in the current inquiry – should have already recused himself and handed the case over to the office of attorney general Wilson.”

Again, though, the clear conflict was Alex Murdaugh’s status as a badge-carrying member of Stone’s office.

“A prosecutor’s job is to objectively find the truth,” Stone said in a 2020 press release. “If a prosecutor has a conflict of interest, then he or she cannot objectively analyze the facts and the law. A prosecutor with a conflict of interest should not provide advice to law enforcement or to other prosecutors on whether or not there is a probable cause for arrest. Nor should a prosecutor give a lengthy analysis of the facts and the law that may prejudice a case in a court of law or in the court of public opinion.”

I could not have said it better myself … so why did Stone not back away from this case given his obvious and extensive proximity to the Murdaughs?

After all, Stone recused himself in the aftermath of a high-profile 2019 boat crash involving Paul Murdaugh – a crash which killed 19-year-old Mallory Beach. That case was referred to Wilson’s office, which wasted little time in charging Murdaugh with three felony counts of boating under the influence (BUI). Murdaugh had pleaded not guilty to those charges and was awaiting his day in court at the time he was murdered. The crash also led to a high-profile civil lawsuit as well as an investigation into allegations that Alex Murdaugh and potentially other members of his family obstructed justice in the aftermath of the boat crash.

More on that latter inquiry in a moment …

“The fact Stone has previously acknowledged these conflicts by recusing himself from a Murdaugh-related case is all the more reason for him to do the right thing and stand aside,” I wrote on June 10, 2021, adding that “I believe there is clear and compelling case for Stone to recuse himself and ask Wilson’s office either to handle it directly or assign it to another solicitor.”

Again, this statement was published just three days after the murders …

In an article on June 19, 2021, I wrote that while “there is absolutely no evidence at this point to suggest that Stone and his investigators have in any way, shape or form compromised the integrity of the probe” that the solicitor’s meddling in the inquiry “even if it is well-intentioned – is wildly inappropriate.”

All these months later, I maintain this belief. While there has been considerable speculation regarding the role Stone’s investigators have played in the double homicide inquiry, I have yet to see anything to suggest they acted out of bounds.

Also, then – and now – SLED sources have maintained nothing has transpired which would compromise the integrity of the investigation. I take them at their word on that … and as I noted in taping our upcoming ‘Week in Review,’ episode, I still believe “100 percent” that SLED will bring the double homicide probe to a just resolution.

In yesterday’s joint statement, however, Keel and Stone claimed “from the first hours of SLED’s investigation, (Keel) was in direct and regular contact” with both Stone and Wilson.

According to multiple sources familiar with the situation, that particular statement is inaccurate.

Multiple sources on both sides of the prosecutorial turf war have told me that for the first ten days of the double homicide investigation, Wilson’s office was effectively “frozen out” by Stone.

Sometime in mid-June, deputy attorney general Creighton Waters reportedly reached out to Stone’s office asking to be “looped in” to the investigation. His request was denied. At this point, sources close to Stone say Wilson reached out directly to the fourteenth circuit solicitor seeking access – but his request was also denied.

Wilson and Waters were frustrated, this source said, because they were already investigating Alex Murdaugh in the aftermath of the alleged boat crash cover-up and were already submitting Murdaugh-related evidence to a statewide grand jury in Columbia, S.C. In fact, a circuit court judge had already approved several subpoenas related to this investigation – subpoenas which have borne fruit in the ongoing SLED investigation into Murdaugh’s multiple alleged financial crimes.

Keel (above), Stone and Wilson reportedly had a phone call on or around June 17, 2021 in which it was decided the attorney general would be allowed to “review Duffie Stone’s legal advice as it related to search warrants” and other matters pertinent to the double homicide investigation.

However, Keel is said to have told Wilson “the fourteenth circuit is where we are going” for investigatory support – and the attorney general would have to wait until a “later date” to review Stone’s decisions.

In other words, a prosecutor with a proven conflict of interest related to Alex Murdaugh was somehow elevated over a prosecutor who was already in the middle of multiple investigations related to Murdaugh and his family.

In what world does that make sense?

To be clear: As I noted in my original treatment of Stone’s conflicted status, Wilson had the ability to take the case from the fourteenth circuit solicitor at any time. As the state’s chief prosecutor, he has the authority to take over the case himself – or assign it to another solicitor.

Stone’s proximity to the case is also troubling given his status as a protégé of Dick Harpootlian – who was representing Paul Murdaugh in the boat crash case and who is currently representing Alex Murdaugh.

Yet another conflict of interest, right?

Again, I am not suggesting Stone or his investigators have done anything to compromise the integrity of the Murdaugh investigation … but those optics are absolutely atrocious. And the Harpootlian connection is yet another reason why neither Stone nor his men should have been anywhere near the Moselle crime scene.

“Ethical conduct is paramount to me and to those who serve the 14th circuit solicitor’s office,” Stone wrote in a muddled statement two weeks after the homicides, attempting to explain his refusal to recuse himself. “We will act promptly and ethically should conflicts arise in this case, as we always have.”

Not promptly enough, it would seem …

In preparing this story, this news outlet prepared an extensive list of questions for Stone, Keel and Wilson. None of them answered a single one of those questions.

“We cannot comment on an ongoing investigation or an open case,” Wilson spokesman Robert Kittle told me.

“The fourteenth circuit solicitor’s office stands by the joint statement issued Thursday,” Stone spokesman Jeff Kidd said. “We have no further comment at this time.”

“Chief Keel stands by his statement and is confident that the integrity of the investigation was not and will not be compromised,” SLED executive affairs director Ryan Alphin said.

In the event any of these agencies ever wish to expand upon those statements, our open microphone is always on – and always available to them.