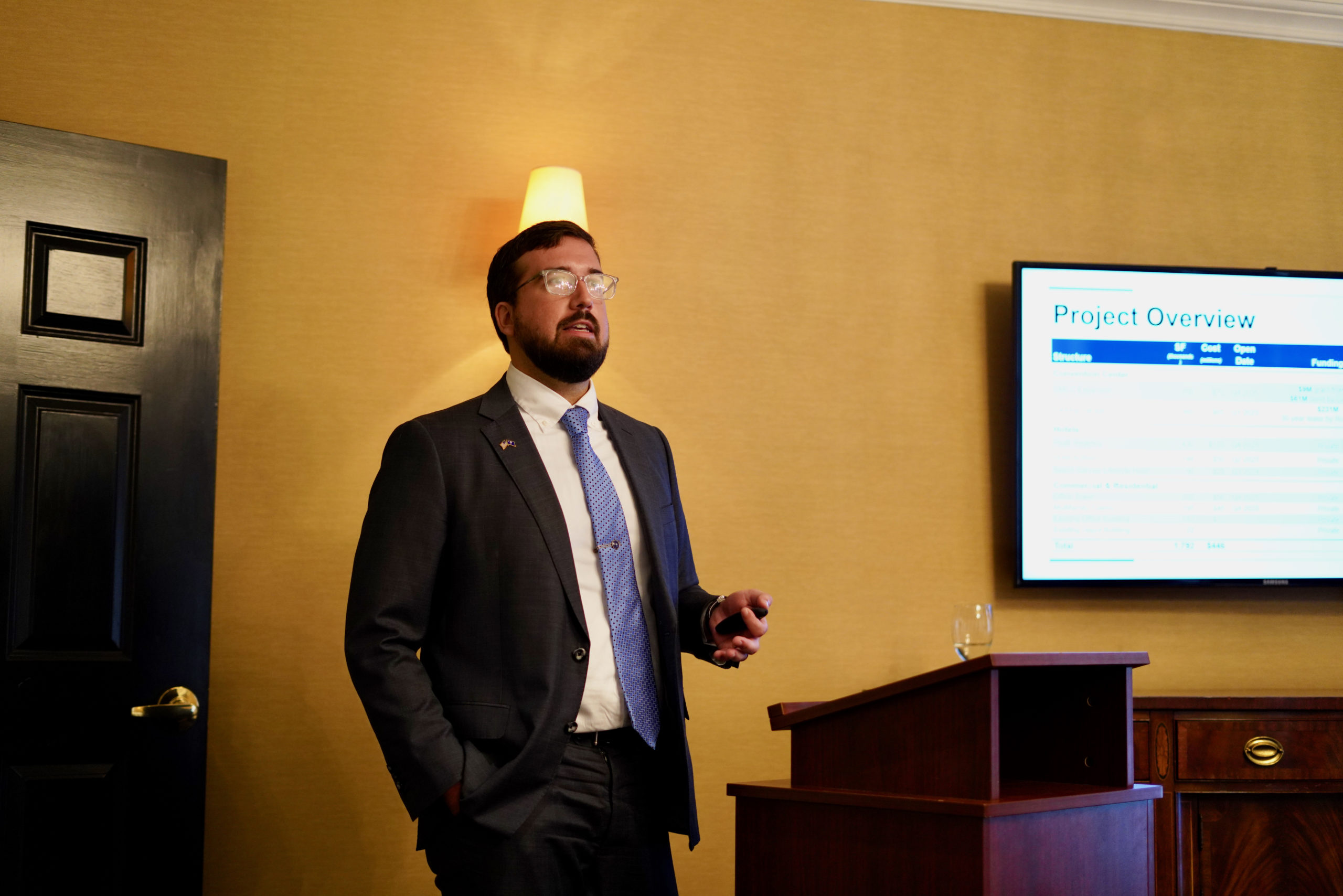 A new report is shining fresh light on the dubious financial assumptions associated with the city of Columbia, South Carolina’s proposed convention center expansion – a project which is already millions of dollars in the red.

The report (.pdf) – commissioned by former S.C. commerce secretary Joe Taylor and state representative Kirkman Finlay – was prepared and presented by researcher Chris Shefelton. According to its findings, even if the rosiest economic forecasts were to materialize for the Columbia Metropolitan Convention Center (CMCC), the expanded facility would continue posting annual operating deficits ranging from $300,000 to $900,000 over the next two decades.

And again, that is under the absolute best-case scenario … one which presumes pie-in-the-sky economic projections bordering on the preposterous.

More realistic projections portend far deeper deficits … which would put taxpayers in an even deeper hole.

From 2013-2018, the CMCC posted operating deficits totaling $7.4 million (or $1.48 million annually). That begs the question: Why were South Carolina taxpayers were compelled to invest $9 million into this project (one of multiple politically driven expenditures tucked away in the Palmetto State’s record-setting $32.1 billion budget for fiscal year 2021-2022)?

Was that a responsible use of taxpayer funds?

As I have previously noted, “Republican” lawmakers blew more than $2 billion in new money this year without providing so much as a dime in tax relief. And they are about to blow billions more in federal “stimulus” money.

In addition to the state’s investment in this speculative boondoggle, taxpayers in Richland county are being asked to assume more than $231 million in additional red ink tied to parking garage adjoining this convention center – even though there is no demand for such a facility (and even though the cost-per-spot associated with its construction is currently clocking in at more than four times the national median).

Again … all for a facility that has never turned (and will never turn) a profit.


“CMCC has historically operated at a loss,” Shefelton noted in his report. “Even under projections for very large event and attendance increases, the (expansion) proposal expects CMCC to continue to operate at a loss.”

Specifically, CMCC would continue to accumulate red ink even if it were to double its current attendance numbers and boost its projected revenues by 25 percent.

Again, though … there is no projection showing the massive taxpayer investments associated with this project ever being made whole. And the local “tourism taxes” being routed to plug this gap are about to take a major hit as Lexington, S.C. is pulling its funding from the project.

Why? Because the town is building is own competition center to compete with Columbia …

“None of our projections account for a recession, a pandemic, a natural disaster or some other global event,” Shefelton told a group of reporters and policy makers who assembled for breakfast on Thursday morning at The Palmetto Club in downtown Columbia.

Beyond the dubious CMCC revenue projections, parking garage estimates touted by city leaders are also unlikely to come even close to materializing. For example, these estimates presume “100 percent of CMCC attendees will drive to Columbia in their own cars,” and that all of these visitors will “park in city garages – all day.”

To say such an assumption strains credulity is putting it politely …

CMCC officials have claimed their expansion plan will produce a staggering $7.2 billion economic impact to the city of Columbia over the next thirty years. For this math to work, though, the center would need to draw 95,000 new visitors in its first full year, and 461,000 new visitors annually within the first decade. Those estimates also presume a whopping two-thirds of all CMCC visitors will “spend the night in the city,” thus significantly increasing the amount of money they spend during their visits.

Is this a realistic target? Again, no … not even a little bit.

According to Shefelton’s research, 86 percent of convention attendees are “day-trippers” – which is why the CMCC currently accounts for an anemic 6 percent of all hotel room nights sold in Columbia. Clearly, expecting two-thirds of all future convention-goers to spend the night on their trip to town is asinine.

The end result of all these calculations? “A significantly inflated economic impact to Columbia,” Shefelton said.

“Most economic impact studies are commissioned to legitimize a political position rather than to search for economic truth,” Crompton famously said in a 2006 report.

That’s for damn sure … especially in South Carolina, a state where taxpayers repeatedly find themselves saddled with the escalating cost of such false promises.

“Too many times in Columbia, we have relied on the benefactors’ prospectuses to make our decisions,” said Taylor, who is currently running for city council. “This time we need to do our due diligence and make sure we are making the best decision for our citizens.”

Taylor (above) said the specious convention center funding proposal is emblematic of a bigger problem that stretches across local governance in the Midlands.

“There is no one standing up for the people,” Taylor said, citing projects like the dubious “penny tax” scam in which well-heeled insiders were enriched but little-to-no benefit accrued to citizens or taxpayers.

Richland county council member Joe Walker – a longtime advocate for transparency and accountability in local government spending – was one of several Columbia-area leaders who raised questions about the financing of the city’s proposal. Specifically, Walker was concerned the debt associated with the parking garage – which the city is asking the county to assume.

Factoring in the financing costs associated with this planned garage, its price per space would top out at more than $80,000 – nearly four times the national media price per space of $22,000 for municipal parking garages.

Readers will recall this news outlet recently referred to this proposed parking garage as an “instrument of debt,” or a way for the project’s wealthy, California-based developer to tap into additional capital for the CMCC project without having to put any of his own money on the line.

“This is a way for a developer to do a half a billion project without having to put a dime into the project.” Walker said bluntly. “And if the revenue falls short, the county would be liable.”

“He is garnering the entire proceed of the sale,” Walker added, referencing the debt the county is being asked to guarantee.

Is that fair? Absolutely not …

The city’s mad scramble to plug several gaping revenue holes associated with this project could explain why Benjamin was so enraged earlier this year when state lawmakers – ostensibly led by Finlay – declined to award this project an additional $17 million in the 2021-2022 budget.

A former city councilman who was elected to the S.C. State House in 2012, Finlay has been assailed by Benjamin for allegedly blocking the convention center funding – even though the mayor and his allies neglected to schedule a single meeting with S.C. House ways and means chairman Murrell Smith to argue in favor of their desired appropriation.

Finlay said Thursday morning his objection to the CMCC appropriation boiled down to numbers … or rather a lack thereof.

“When this proposal came before the S.C. General Assembly I asked for two weeks to get numbers – I gave up on getting those,” Finlay said. “I met with the project manager’s lobbyist and his legal counsel and tried to get them – but I never got anything. That’s why we had to do this.”

Finlay (above, right) said the problem with obligating debt to speculative projects like the CMCC expansion comes when the inevitable economic downturns hit – at which point core government functions find themselves on the chopping block.

“Having sat on a city council before, when you hit a bad time all of a sudden you’ve got the convention center and the museum fighting each other for tax dollars,” Finlay said. “And then you start seeing trash collection services impacted.”

According to Finlay, Midlands residents will have an opportunity to see for themselves how capital projects are supposed to be funded in the coming months when he and his allies roll out a new infrastructure proposal to address a critical need in downtown Columbia, S.C.

“The city and the county are going to have the opportunity to do some truly transformational projects – with assistance from the state,” Finlay said. “That is what I am committed to doing, and we are going to make sure the financials are solid.”

For far too long, Columbia has been a place where speculative real estate deals are foisted on taxpayers with absolutely no regard for necessity, logic, feasibility, sustainability or profitability – to say nothing of the economic consequences felt by those who are compelled to pick up the tab.

The result? A regressive, anti-competitive tax and business climate which unfairly shifts the burden for speculative “economic development” deals – as well as essential projects – onto the backs of working class citizens.