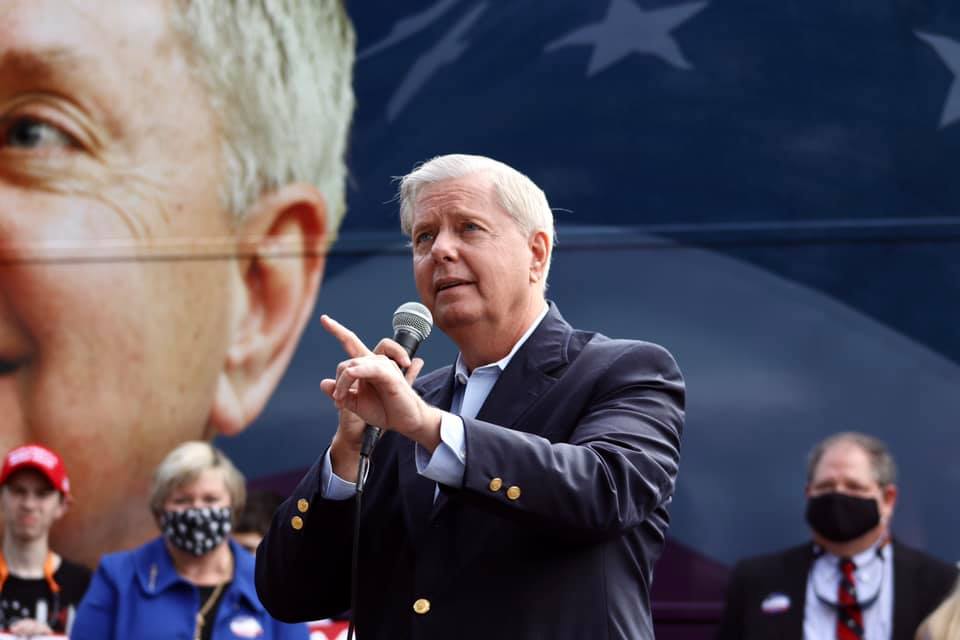 Fiscally liberal U.S. senator Lindsey Graham of South Carolina has been getting worn out by rank-and-file Republican party leaders in the Palmetto State in recent weeks for supporting a $1.2 trillion “infrastructure” bill championed by U.S. president Joe Biden.

Like any good politician, the 66-year-old Seneca, S.C. native has responded to the firestorm by … changing the subject. Specifically, Graham has joined the bipartisan cacophony criticizing Biden’s botched withdrawal of American forces from Afghanistan.

Will the ruse work? Probably. After all, Graham “knows how to count.” Meaning you can predict his politics by the time remaining until his next election. The further away from the upcoming vote, the more left-of-center Graham is. The closer the time comes to face Palmetto State citizens at the ballot box, the harder Graham tacks to the right.

Also, never forget this: So-called “conservative” opposition to Graham in South Carolina never seems to manifest itself in the form of a credible GOP primary challenge. And when “Republican” voters have a chance to send Graham a message in general elections – they invariably circle the wagons and defend him.

Which makes GOP opposition to Graham in the Palmetto State definitional “sound and fury.”

To some extent, Fox News’ host Tucker Carlson is sound and fury, too (albeit on a much higher energy level). But to his credit, Carlson’s outrage against Graham is as abiding as it is deftly articulated. The talking head has never liked Graham, nor has he ever been afraid to say so. Last fall, in fact, he blamed Graham for privately undermining former U.S. president Donald Trump – slamming the incumbent GOP judiciary chairman at a pivotal moment in his race against Democrat Jaime Harrison.

“Lindsey Graham has opposed, passionately opposed, virtually every major policy initiative Mr. Trump articulated when he first ran – from ending illegal immigration, to pulling back from pointless wars, to maintaining law and order at home,” Carlson said. “Mr. Graham was against all of that.”

Fast-forward to this week, when Graham joined the “pile-on” of Biden following his Afghanistan debacle.

Unlike a lot of media figures, Carlson isn’t letting Graham – or his other neoconservative allies – get away with their hypocrisy.

“The Biden administration didn’t do this alone – they’ve had a lot of help over a very long time from the reckless neoconservatives who run our foreign policy establishment,” Carlson said during a scathing monologue recorded earlier this week.

“The main reason Americans were so shocked by the fall of Kabul is that for years, people in Washington have been lying to them about it and telling them everything in Afghanistan is just fine, it’s improving – forever improving, Our sacrifice is well worth it. Our strategy is successful. Just keep sending us money and young soldiers and we will make the world safe for America. For decades, that’s what they’ve told us.”

Indeed … and the costs of those lies has been staggering.

“One of the main mouthpieces for these lies has been senator Lindsey Graham of South Carolina,” Carlson continued. “Graham identifies as a ‘Republican,’ but his views in real life are indistinguishable from, say, Tony Blinken’s or Mark Milley’s. Graham’s real constituents are in permanent Washington, not in South Carolina.”

Carlson proceeded to pull together three clips that, according to him, “tell you the story of Lindsey Graham’s personal responsibility for the debacle now on display in Afghanistan.”

In the first clip, recorded in early 2009, Graham announced his support for former U.S. president Barack Obama’s decision to send an estimated 35,000 additional troops to Afghanistan – which he famously termed the “right war” (a dig at his predecessor George W. Bush’s costly commitment to the “wrong war” in Iraq).

“We have a game plan in Afghanistan that I think justifies the expenditure of blood and treasure that’s about to come,” Graham said at a press conference with Obama.

In the second clip, recorded in 2011, Graham touts the progress made in Afghanistan – and other countries – under Obama’s “surge.”

“We’re on the verge, in my view, of turning this thing around,” Graham said. “I see Afghanistan, Tunisia, Egypt, Libya, Syria, Yemen … as incredible opportunities to change the world for the better. If we, as congress, accelerate the withdrawal schedule because it’s popular at home we will undercut all the gains we have made.”

A decade later, though, the situation never turned around. This led to Carlson pulling the third clip, in which Graham did his best to put a positive spin on the situation.

“As difficult as Afghanistan has been – and will be – things have changed,” Graham said back in April, citing the ability of people to “sing and dance and live their lives without the oppression that the Taliban brought on them.”

“Lindsey Graham himself does not wade in on the results of his ‘game plan,’ he doesn’t like to look backward,” Carlson concluded. “Reflection suggests accountability, and if there’s one thing Lindsey Graham is strongly opposed to, it’s that.”

Regular readers know my news outlet has spent years opposing the American presence in Afghanistan – one of many failed interventionist foreign policies pursued by Biden, Trump and their predecessors.  I repeatedly called on Trump and Obama to end the Afghan War – rebuking that conflict as well as our nation’s costly military misadventure in Iraq.

“America should have never gotten into either of these wars,” I wrote back in 2012.  “There was never a compelling national interest to do so, just a loosely defined desire to wage ‘War on Terror.’ And assuming you’re naïve enough to believe that there was some sort of compelling national interest justifying our involvement in Afghanistan or Iraq, then at the very least we should have entered into each conflict with clear objectives, a timetable for achieving them and an exit strategy.  As it stands now we’re just being bled dry … literally and in the wallet.”