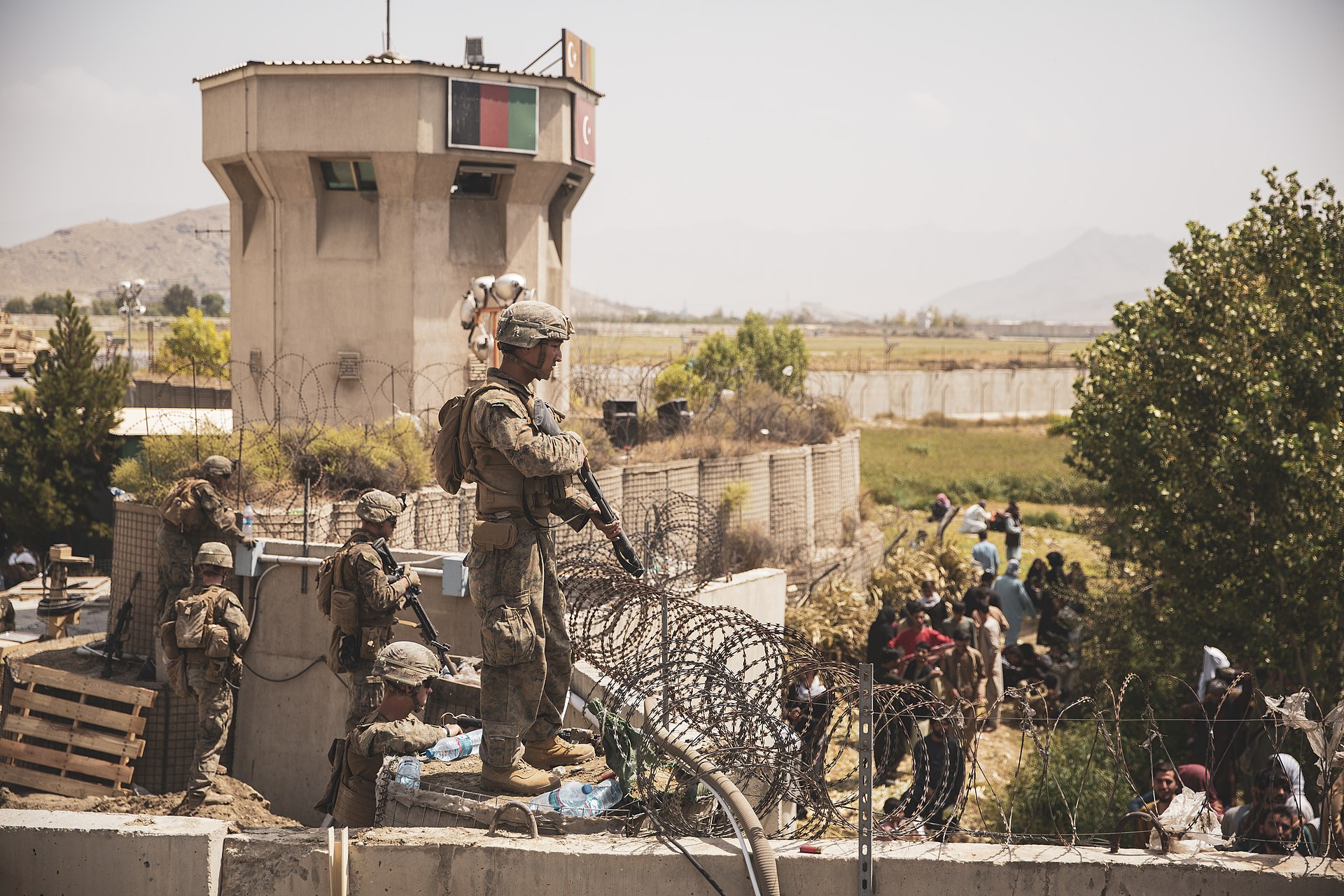 A buddy of mine who served in Afghanistan in 2007 called me last week. He was pissed – not just that he felt he had wasted a year of his life on a military mission which ended in ignominious defeat, but that the cost of this failure was becoming unbearably high. My friend was particularly nonplussed about the United States’ failure to conduct a secure, orderly withdrawal from a nation known for centuries as the ‘Graveyard of Empires.’

“We are leaving behind billions of dollars in weapons,” the soldier told me, contrasting the American withdrawal from Afghanistan with the retreat of the Russians from the same land more than thirty years ago.

Littered across Afghanistan to this day are the remains of the Soviet-Afghan war – a conflict that raged for ten years between the Union of Soviet Socialist Republics (USSR) and the Afghan mujahideen, a coalition of armed Islamic militia groups famously equipped with shoulder-mounted stinger missiles by the United States via Charlie Wilson’s War.

“When the Soviets left they dug huge pits and trenches, drove or dumped their equipment into them – and blew them up or set them on fire,” my soldier friend explained. “You can still see those graveyards in Afghanistan today.”

As for the United States, it has permitted tens of thousands of rifles, machine guns, grenade launchers, mortars, howitzers, trucks, Humvees, mine-resistant ambush-protected (MRAP) vehicles and other weapons to fall into the hands of the Taliban, the Islamist theocracy which was displaced by the initial American invasion of the country twenty years ago.

The Taliban swiftly reclaimed power in Afghanistan – culminating with the fall of Kabul on August 15, 2021.

In addition to the aforementioned assets, Taliban forces have seized American helicopters, tanks, planes and other military equipment as they stormed back into power.

What sort of a weapons cache are we talking about? The American government doesn’t even know …

“We don’t have a complete picture, obviously, of where every article of defense materials has gone, but certainly a fair amount of it has fallen into the hands of the Taliban,” national security adviser Jake Sullivan told reporters last week.

The administration of U.S. president Joe Biden has been mercilessly pilloried for its mishandling of the withdrawal of American forces (and assets) from Afghanistan. His predecessor – Donald Trump – has referred to the debacle as “the dumbest move ever made in U.S. history.”

“They forgot one thing, they forgot to take the people with them and the merchandise with them, meaning they forgot to take the greatest military equipment anywhere in the world with them, and it’s hard to believe, actually, because a child would have understood,” Trump said during an interview with Fox News on Thursday evening. “You get the military out last. A child would have understood that. How could they have done this to our country?”

“It’s so sad,” Trump continued. “From the standpoint of military tactics and just embarrassment, the most embarrassing thing that has ever happened to our country; we look like fools all over the world, we are weak, we are pathetic, we are being led by people that have no idea what they are doing.”

Trump isn’t alone in his criticism, though.

According to an expansive story recently published by The New York Times, Biden made a “series of misjudgments” about the Afghan withdrawal based on the mistaken belief that he “had the luxury of time.”

For example, as recently as late April, Biden’s intelligence leaders were telling him a Taliban takeover of Afghanistan was unlikely to happen until late 2022.

“The likelihood there’s going to be the Taliban overrunning everything and owning the whole country is highly unlikely,” Biden said in July.

Pressed as to what he would do in the event that were to happen, Biden told reporters he had a plan – and refused to answer any more questions about Afghanistan.

“I want to talk about happy things, man,” Biden (above) said.

“There’s going to be no circumstance where you see people being lifted off the roof of an embassy of the United States from Afghanistan,” Biden added, referencing the fall of Saigon in April 1975. “It is not at all comparable.”

As Biden’s poll numbers have continued to plummet in the aftermath of the Afghan debacle, even his erstwhile Democratic allies are now throwing him under the bus.

“The thing that everybody needs to understand, even if you completely agree with the Biden administration’s decision to withdraw, the way they have handled this has been a total f*cking disaster,” U.S. congressman Seth Moulton of Massachusetts told New York magazine following a trip to Kabul to view the situation.

Moulton and “Republican” congressman Peter Meijer of Michigan flew to Afghanistan on Tuesday to witness the evacuation firsthand, claiming they were not getting “the full story from the administration.”

Biden is certainly not alone in his failure. As he has reminded anyone who will listen, the original agreement to withdraw U.S. forces from Afghanistan was negotiated by Trump. But Biden’s administration clearly failed to recognize months ago that its plan for evacuating American troops, citizens, equipment and other assets was falling apart.

There are also reports Biden’s aides were “too afraid” to tell him – and Sullivan – that their strategy was unrealistic.

“People are simply too afraid to tell Biden (and) Jake Sullivan (his National Security Adviser), they’re wrong,” one senior Pentagon official told Josie Ensor of The (U.K.) Telegraph last week. “It’s one thing to crack down on leaks (as Mr Biden has done), it’s another thing to allow a mistake like this. This White House is very disciplined, especially when it comes to leaks and such. But the downside of discipline is if you’re running things like an autocracy, and you broker no dissent internally, that’s not what the purpose of a White House staff is.”

As a result, Biden was unable to see the outlines of impending disaster.

“Only in recent weeks did the administration change course from its original plan,” the Times report concluded. “By then it was too late.”

On Thursday, a devastating blow was inflicted against the handful of remaining U.S. military personnel – and the individuals they are trying to evacuate – by terrorists affiliated with the Islamic State of Iraq and Syria (ISIS). At approximately 6:00 p.m. local time, a suicide bomber detonated an explosive device near a crowded gate at Kabul’s Hamid Karzai international airport – which is on the verge of being overrun by the Taliban.

Karzai airport has been the site of frantic evacuations since the fall of Kabul two weeks ago.

“To those who carried out this attack, as well as anyone who wishes America harm, know this: We will not forgive. We will not forget. We will hunt you down and make you pay,” Biden said in response to the attack. “Our mission will go on. America will not be intimidated.”

More terror attacks are expected, putting the Biden administration in the untenable position of having to work with the Taliban to complete as many evacuations as possible prior to an administration-imposed deadline of August 31, 2021.

“The reality is the Afghan – the Taliban control large swaths of Afghanistan, including the area surrounding the perimeter of the airport, so by necessity that is our option, to coordinate with to get American citizens out, to get our Afghan partners out, to get individuals who are eligible for the range of programs the United States has out,” White House press secretary Jen Psaki said on Friday. “This is not a preferred relationship or a situation that we would have designed if we had started from scratch, I think that’s very clear. But right now we need to continue to coordinate, that’s our focus for the next couple of days.”

Obviously, my news outlet has spent years opposing the American presence in Afghanistan – one of many failed interventionist foreign policies pursued by Biden, Trump and their predecessors.  I repeatedly called on Trump and former president Barack Obama to end the Afghan War – rebuking both that conflict as well as our nation’s costly military misadventure in Iraq, which was initiated by former president George W. Bush.

“America should have never gotten into either of these wars,” I wrote back in 2012.  “There was never a compelling national interest to do so, just a loosely defined desire to wage ‘War on Terror.’ And assuming you’re naïve enough to believe that there was some sort of compelling national interest justifying our involvement in Afghanistan or Iraq, then at the very least we should have entered into each conflict with clear objectives, a timetable for achieving them and an exit strategy.  As it stands now we’re just being bled dry … literally and in the wallet.”

According to the latest estimates from Brown University’s Costs Of War project, America has spent $2.313 trillion in Afghanistan.

“This total does not include funds that the United States government is obligated to spend on lifetime care for American veterans of this war, nor does it include future interest payments on money borrowed to fund the war,” the school noted, adding that the total “spent on Afghanistan is a portion of the total estimated cost of the post-9/11 wars.”

With a national debt approaching $28.7 trillion, the United States simply cannot afford to continue subsidizing military misadventures and clandestine paramilitary operations around the globe – nor can our taxpayers continue to subsidize the defense of other nations.

The cost in blood and treasure is simply too high …

Am I saying America should not refrain from responding to the latest attacks against its service members in Afghanistan? Of course not. Our nation should always meet terrorist violence with overwhelming force. My point is simply this: Wars of occupation are not the answer.

Perhaps the time has come to hit reset …

Has The Pope Gone Crazy?