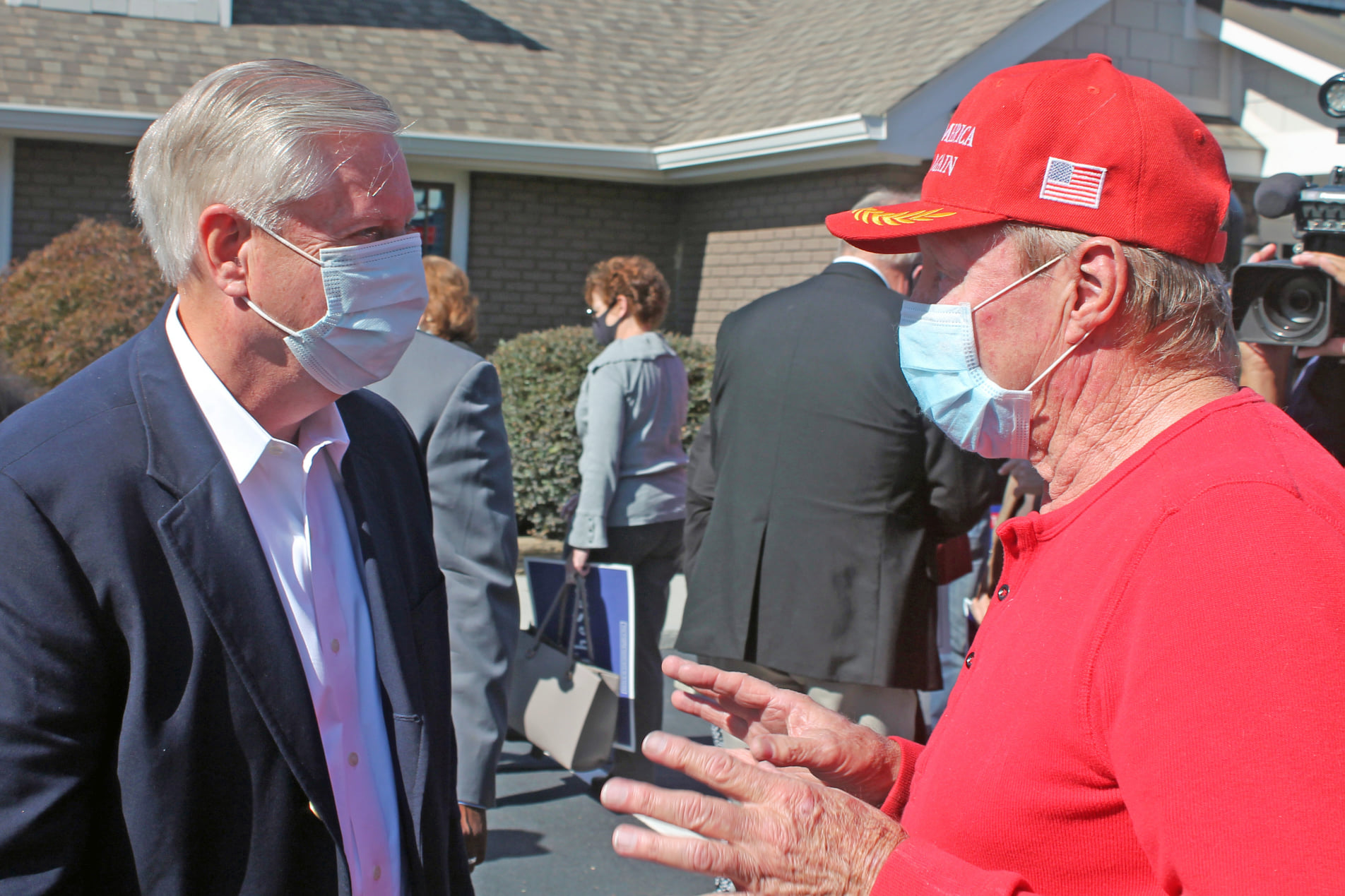 South Carolina “conservatives” who have frequently criticized U.S. senator Lindsey Graham are rallying to his defense at a pivotal moment in his bid for a fourth term in Washington, D.C.

Their logic? Apparently they believe a liberal “Republican” is better than an establishment Democrat …

Accordingly, a group of more than a dozen Palmetto State conservative activists – including Greenville Tea Party leader Pressley Stutts – are “coming together … to stand tall with Senator Graham.”

The push by these activists comes as Democratic nominee Jaime Harrison and various groups supporting his candidacy appear to be adeptly exploiting Graham’s long-standing vulnerability on his right flank.

Specifically, they are calling on conservative voters to embrace Constitution party candidate Bill Bledsoe – whose name is on the 2020 ballot despite the fact he previously dropped out of the race and endorsed Graham.

If enough conservatives support Bledsoe, the election could be thrown to Harrison – a Washington, D.C. lobbyist and longtime ally of Hillary Clinton who led the S.C Democratic Party (SCDP) from 2013 to 2017.


Harrison, 48, of Orangeburg, S.C. is mounting a surprisingly competitive bid against Graham – including a pair of recent polls which show him leading the GOP incumbent.

“We are very concerned about the leftist, liberal and socialist/ marxist positions of Senator Graham’s opponent Jaime Harrison,” a media advisory from Stutts and his fellow conservative activists noted. “These positions are antithetical to the values of the people of SC and they threaten our very way of life regarding our families, finances and freedoms. And, God forbid, should the democrats win the Senate as they are trying to do, we believe that America will no longer be recognizable as a Constitutional Republic.”

Stutts and his allies added that they were “encouraging ALL South Carolinians to reject Harrison’s platform and candidacy and join with us in voting for Senator Lindsey Graham.”

“Six years is too long to take a chance on a man who counts Nancy Pelosi as his mentor and whose liberal policies with hurt the families of South Carolina and America,” the advisory continued.

Stutts and his group will gather outside the Greenville county council offices (301 University Ridge) in Greenville, S.C. at 1:00 p.m. EDT on Wednesday, October 28, 2020 to “(spell) out our reasoning and rationale as to why we are supporting Senator Graham.”

Not all conservatives are backing Graham, however …

As we reported over the weekend, conservative commentator Lou Dobbs – a host on the Fox Business network who is one of president Donald Trump’s favorite newscasters – came out strongly against the shape-shifting “Republican.”

“Graham has betrayed President Trump at almost every turn,” Dobbs said during his broadcast on Friday evening. “He has betrayed the American people and his oath of office.”

“I don’t know why anyone in the great state of South Carolina would ever vote for Lindsey Graham,” Dobbs added.

Dobbs is upset at Graham for refusing to summon social media leaders to Washington D.C. to appear before his judiciary committee and testify as to their ongoing, one-sided, agenda-driven censorship of the news.

Dobbs has also castigated Graham for failing to advance a congressional inquiry into “Spygate” (a.k.a. Obamagate) – which refers to efforts by the administration of former U.S. president Barack Obama to spy on Trump’s 2016 presidential campaign.