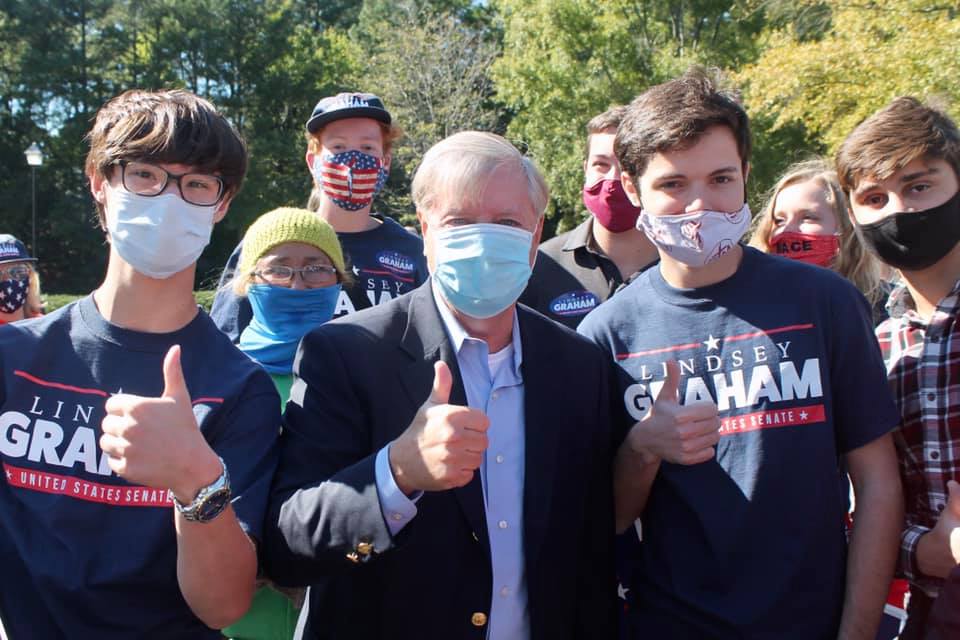 Just one thing, though: As we noted in a recent post, Graham and Harrison are not alone on the 2020 ballot for the U.S. Senate in the Palmetto State (as much as one of them might wish that were the case).

Constitution party candidate Bill Bledsoe is looming large as a potential spoiler in this high-stakes, high-dollar fight. And while Bledsoe may have dropped out of this race (and lent his imprimatur to Graham), his name remains on the November 3, 2020 ballot.

As a result, many conservative voters who disapprove of the shape-shifting senior senator from Seneca, S.C. are likely to check the box for this third-party option in protest – especially seeing as multiple Fox News continue to rain contempt down on Graham’s head.

The group behind this mailing – Liberty SC – has a bare bones website detailing its endorsement of Bledsoe (and U.S. president Donald Trump).

According to the mailing, Graham has betrayed “conservative values” by voting to confirm former U.S. president Barack Obama’s pro-abortion judges while teaming up with the late U.S. senator Ted Kennedy to “give citizenship to illegals.”

Are those allegations true? Yes.

In fact, on the abortion issue Graham has actually been far worse than the mailing suggests.

“The bottom line is, if you can’t admire Joe Biden as a person … you’ve got a problem,” Graham said in a 2015 interview, fighting back tears. “You need to do some self-evaluation.”

“What’s not to like?” Graham continued, referring to the future Democratic nominee. “He’s the nicest person I think I’ve ever met in politics. He is as good a man as God ever created.”

In fairness to Graham, we have previously noted that this particular line of attack “callously exploits what was obviously a very emotional moment from five years ago – one in which the senator was discussing his personal friendship with Biden just days after the latter lost his son.”

It’s pretty low to use it against him, in other words …

Still, the optics remain terrible for Graham … and effective for those looking to unseat him.

The Liberty SC mailing goes on to assert that Bledsoe is “the only candidate on the ballot who stands with President Trump and will never back down to pressure from the liberals.”

Such language is nearly identical to the messaging that has been emanating from Harrison’s campaign and various third party groups in recent weeks – a well-organized effort to tout Bledsoe’s candidacy as part of their bid to oust Graham from the office after 26 years in Washington, D.C.

In one such ad, Harrison “attacks” Bledsoe as a “right-wing Constitution party candidate” who “opposes all abortions” and as a result is “too conservative for South Carolina.”

Graham backers are lived at the Harrison strategy …

“(It) reeks of desperation by the Harrison campaign if they are stooping to this level of dishonesty,” one Lowcountry GOP operative told us.

Perhaps … but what about the shady groups supporting Graham?

Last time we checked, neither side was clean in this year’s “dark money” machinations.

After slipping into a dead heat with Harrison in early October, Graham appeared to move comfortably ahead in this race two weeks ago thanks to his starring (albeit hypocritical) role in the pending confirmation of U.S. supreme court nominee Amy Coney Barrett.

However, the race has once again narrowed according to the latest polls.

Also, while Harrison has moved decisively to exploit Graham’s core vulnerability, the incumbent and his allies have inexplicably failed to exploit Harrison’s own base problems – something we have argued they should have been doing weeks ago.

Our view? Despite the various factors working in his favor, Harrison still has a tough row to hoe …

No Democrat has won a U.S. Senate race in the Palmetto State since the late Fritz Hollings defeated GOP congressman Bob Inglis in 1998. In fact, no Democrat has won a statewide election in South Carolina since 2006 – when Jim Rex defeated Karen Floyd in the race for state superintendent of education.

Clearly Harrison is putting up more of a fight than anyone imagined, but he still has an uphill climb ahead of him.