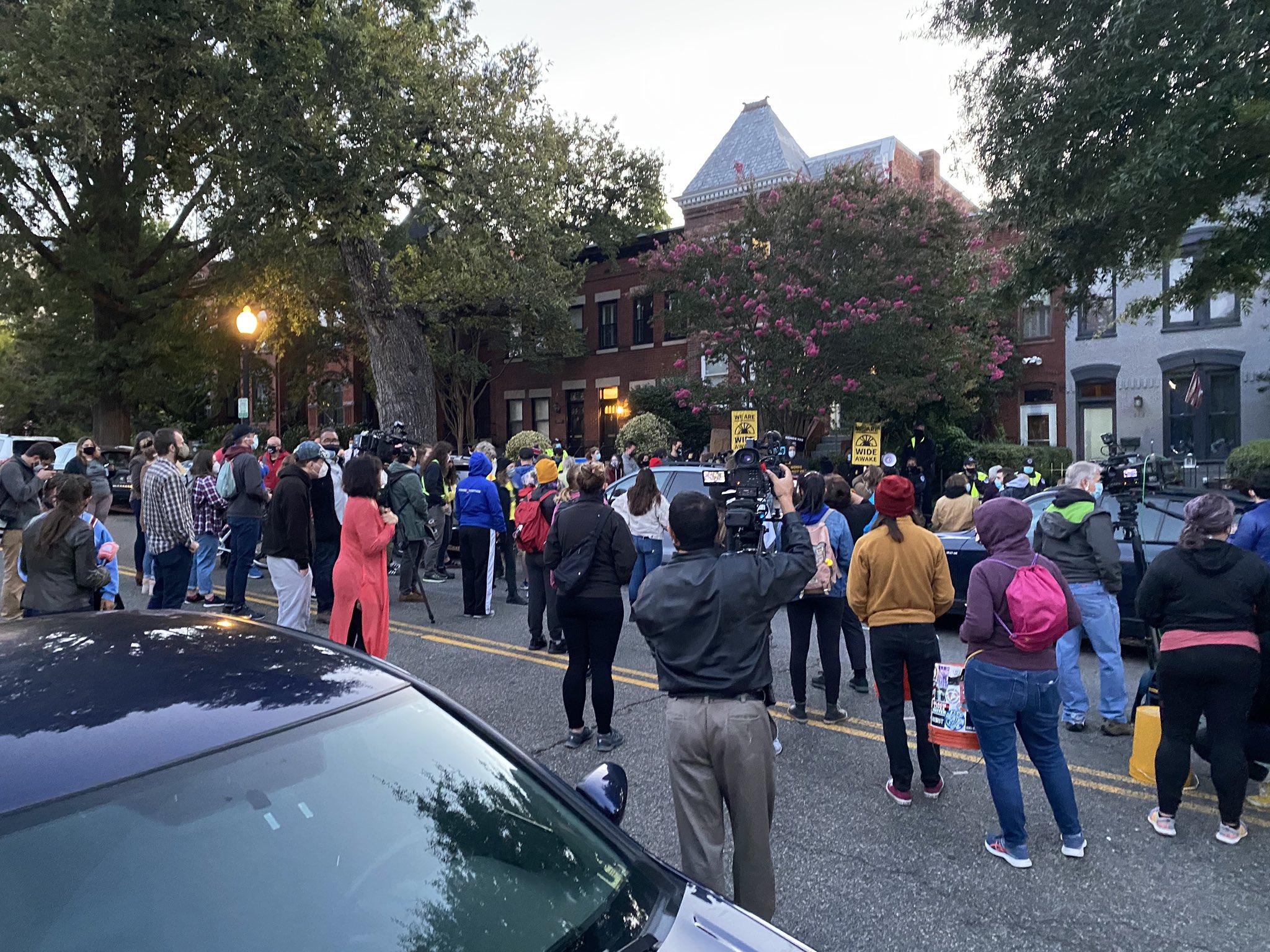 Liberal activists in Washington, D.C. staged an early morning protest of U.S. senator Lindsey Graham’s residence after he said he would back president Donald Trump in appointing a replacement for the late Ruth Bader Ginsburg on the U.S. supreme court.

Ginsburg died Friday evening, creating a vacancy on the high court that Trump will have an opportunity to try and fill.

According to Khalida Volou of WUSA TV 9 (CBS – Washington, D.C.), “a crowd of demonstrators” gathered outside Graham’s Washington residence at around 6:00 a.m. EDT on Monday morning – banging drums and ringing bells as they called him out for his hypocrisy on the appointment.

Volou reported that protesters “were seen standing on (Graham)’s lawn chanting with bells and whistles” – and used loudspeakers to replay his statements regarding the 2016 nomination of Merrick Garland by former president Barack Obama.

“I want you to use my words against me,” Graham said four years ago. “If there’s a Republican president in 2016 and a vacancy occurs in the last year of the first term, you can say Lindsey Graham said let’s let the next president, whoever it might be, make that nomination.”

Republicans refused to schedule a vote on Garland’s confirmation – and Graham said at the time that he would abide by this precedent during the final year of a GOP presidency.


“If an opening comes in the last year of president Trump’s term, and the primary process has started, we’ll wait to the next election,” Graham said during an October 2018 interview with Yahoo News.

At the time he originally adopted his position, Graham was an ardent #NeverTrumper – but he underwent a political metamorphosis and is now viewed as an ally of Trump.

Anyway, the protesters took Graham up on his offer to “use his words against him.”

“D.C. residents will be fighting for their children and grandchildren early Monday morning, by insisting that Trump should not be allowed to fill his third lifelong Supreme Court appointment, tipping the court for generations,” the group ShutDown D.C. said in a statement.

Metropolitan police arrived on the scene and warned protesters they were in violation of a municipal tranquility ordinance. U.S. capitol police also arrived on the scene to protect Graham, who is in the fight of his life back home in South Carolina against Democrat Jaime Harrison.

Graham is ordinarily one of the more liberal “Republican” members of the U.S. Senate, but he had no choice but to back Trump’s play on the supreme court vacancy. After all, Graham was already in deep trouble with his Republican base – and a fight like this affords him an opportunity to shore up his right flank in a state that has not elected a Democrat to the U.S. Senate since 1998.

(Via: Graham for Senate)

Graham (above) blamed his court flip-flop on actions taken by Democratic leaders Harry Reid – who ran the Senate from 2007 to 2015 – and Chuck Schumer, who led Democrats during the heated battle over the appointment of centrist Brett Kavanaugh to the court in 2018.

“The two biggest changes regarding the Senate and judicial confirmations that have occurred in the last decade have come from Democrats,” Graham said over the weekend. “Harry Reid changed the rules to allow a simple majority vote for circuit court nominees dealing out the minority. Chuck Schumer and his friends in the liberal media conspired to destroy the life of Brett Kavanaugh and hold that supreme court seat open.”

“In light of these two events, I will support president Trump in any effort to move forward regarding the recent vacancy created by the passing of justice Ginsburg,” Graham added.

Trump has said he will submit his nominee to replace Ginsburg this week, but two liberal GOP senators – Lisa Murkowski of Alaska and Susan Collins of Maine – have already said they will not vote to confirm his choice prior to the election.

#NeverTrump U.S. senator Mitt Romney of Utah could join them – which would mean the GOP could wind up needing vice president Mike Pence to cast a tie-breaking vote for Trump’s nominee.

If four Republican senators break ranks with their party, the gig is up …