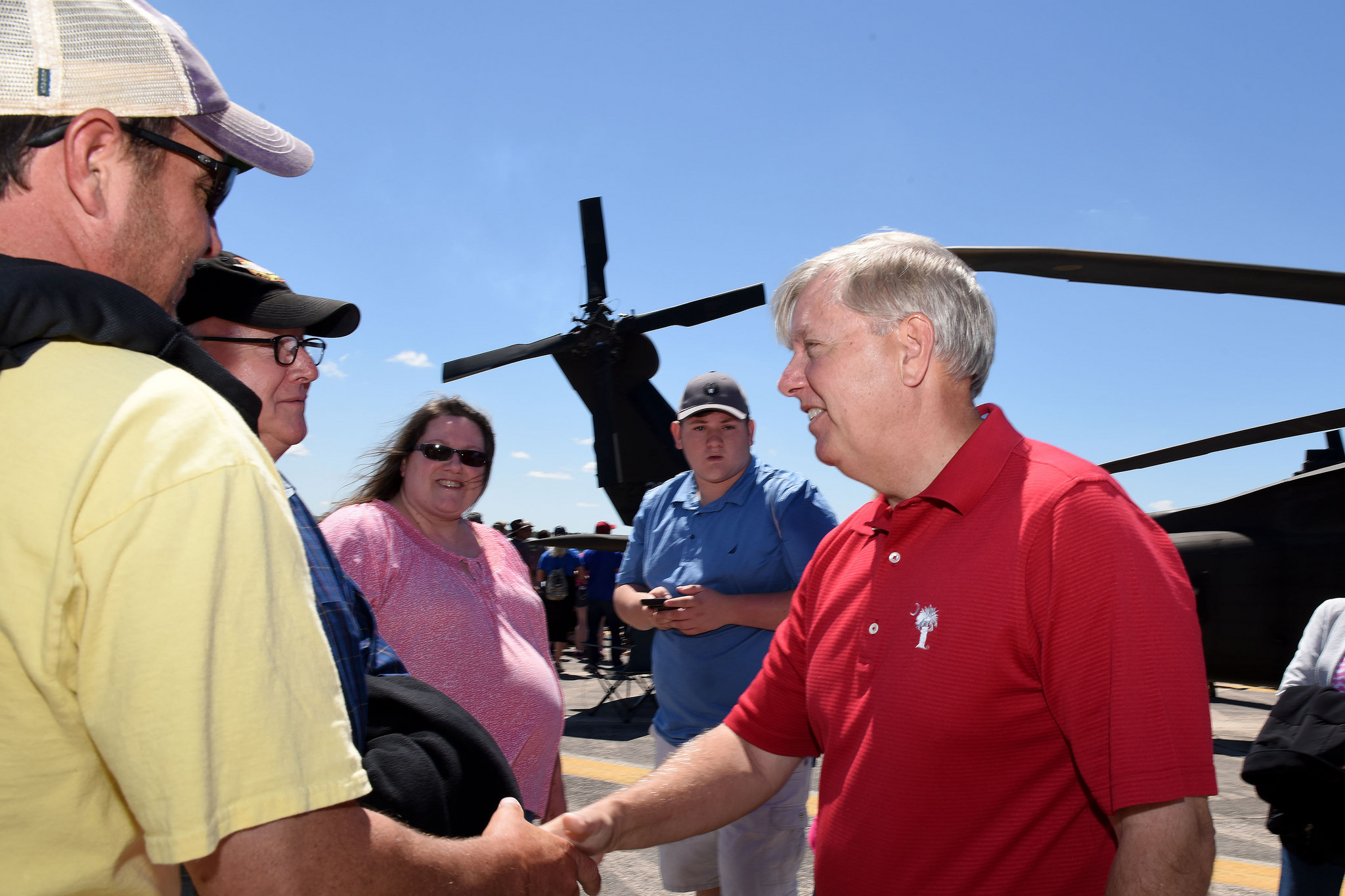 Warmongering, fiscally liberal U.S. senator Lindsey Graham has given GOP voters in South Carolina plenty of reasons to oppose him in recent years.  And make no mistake: They oppose him.

But Graham has always managed to pivot to the center-right of the American political spectrum prior to election years … often invoking hot button social conservative issues as a central part of his crass political calculation.

The math has added up for him, too …

Meanwhile, Graham’s haters have never coalesced around a single, viable challenger … enabling him and his special interest-fed war chest to coast to the “Republican” nomination (at which point you can pretty much do anything and still get elected in the Palmetto State).

We doubt it … although his recent bromance with U.S. president Donald Trump shows just how far he is willing to go in an effort to reinvent himself (again) to the Palmetto State’s GOP electorate.  And if Trump keeps wrapping his arm around Graham the way he did at a rally in West Columbia, S.C. last week, you never know.

If Graham does intend to pivot back right in 2019, he staked out some interesting ground this week in anticipation of Trump naming his second nominee to the U.S. Supreme Court.  After campaigning as an adamant pro-lifer in 2014, Graham is now on the record arguing in favor of the Supreme Court case that legalized abortion on demand.

According to Graham, the controversial 1973 decision Roe v. Wade – has been “reaffirmed in many different ways” over the last 45 years.

“You don’t overturn precedent unless there’s a good reason,” Graham said during an interview that aired Sunday morning on NBC’s Meet The Press.

Graham went on to say, “I would tell my pro-life friends: You can be pro-life and conservative, but you can also believe in stare decisis.”

Stare decisis, for those of you unhip to the headmaster ritual, is Latin for “stand by things decided.”  Or standing by precedent.

In other words, Graham is affirming the legitimacy of Roe v. Wade and subsequent pro-abortion rulings.

Needless to say, stare decisis was nowhere to be found in Graham’s vocabulary when he was pandering on the pro-life issue back in 2013.  Nor is it likely to be well-received by pro-life, conservative GOP voters in his home state.

“Basically he is saying, ‘I’m pro-life, but a group of unelected justices legislated abortion-on-demand from the bench and because of this made-up idea of stare decisis, we just have to accept it,” said Colton Grace, a GOP voter and pro-life advocate from Lake Wylie, S.C.

Unlike Graham (and “Republicans” at the S.C. State House), we have never wavered on this issue: This news site is pro-life.  Adamantly.  We always have been, and we always will be.

Life is “the bedrock freedom, the essential, inalienable liberty from which all other American liberties originate,” we wrote earlier this year.

“If it can be violated with impunity, none of the other liberties matter,” we added.

Also if one claims to be a libertarian yet supports the construct of abortion on demand, then they have a false conception of liberty.  Because the last time we checked one’s liberty ceases to exist at the moment it begins to unjustifiably infringe upon a more elemental liberty being exercised by another.  Especially one being exercised by a child in the womb.

Having said that, we’ve also been criticized for not being “100 percenters” – which means we have been slammed by “real” pro-lifers because we support exceptions for victims of rape and incest (and for the record, we also support the morning after pill).

Still, we have never accepted the notion that the “privacy” right established by Roe v. Wade in any way, shape or form supplanted the right to life.  And with all due respect to Graham, when it comes to stare decisis we would point him to the American Declaration of Independence as well as the Fifth and Fourteenth Amendments to the U.S. Constitution.

That should be all the precedent necessary to resolve this issue on the side of life.

Obviously Graham has hurt himself with GOP voters before … he was exposed by Wikileaks in 2016 as former U.S. president Barack Obama’s “best GOP ally.”  He’s also a longtime amnesty pimp.  And tax-hiker.  Not to mention a key driver of the progressive narrative in Washington, D.C.

But this?  This is different …

Graham is staking out a position he will simply be unable to walk back – even if he winds up voting in favor of a judge who affirms the right to life.  In the process, he is making his 2020 reelection bid an even steeper uphill climb than it already was.

Which trust us … is saying something.