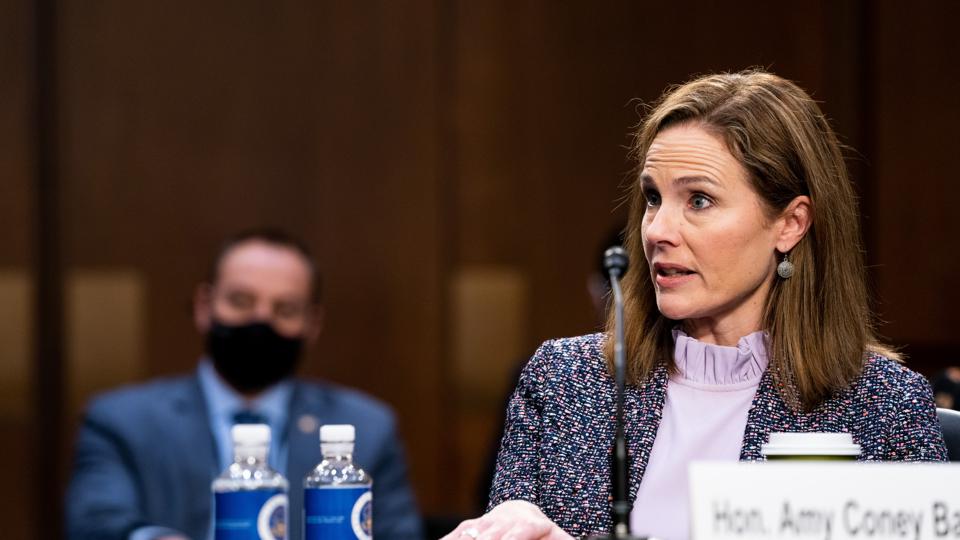 Days before a historic vote in the U.S. Senate, a narrow majority of Americans say they support the confirmation of Amy Coney Barrett as the next associate justice of the U.S. supreme court, according to polling released this week by Gallup.

Talk about a nation divided …

Of course, these middling numbers for Barrett’s confirmation – likely to happen early next week – are positively stratospheric for U.S. president Donald Trump. After all, the vast majority of previous public opinion polls indicated support for waiting until after the November 3, 2020 election to name the next nominee to the court.

Trump nominated Barrett to fill the vacancy created by the death of liberal icon Ruth Bader Ginsburg last month. Since taking office in January 2017, Trump has successfully nominated Neil Gorsuch and Brett Kavanaugh to the bench. He has also successfully installed more than 50 appellate court judges and more than 160 district court judges.

“Barrett is the twelfth Supreme Court nominee for whom Gallup has measured public support since 1987,” noted Megan Brenan for Gallup. “The public’s initial support for Barrett’s confirmation is higher than either of President Donald Trump’s two previous nominees – Neil Gorsuch and Brett Kavanaugh – had at any point prior to their confirmations.”

There’s a flip side to that coin, though …

“Opposition is also higher than any other nominee’s initial reading,” Brenan added. “This is owed to the fact that the percentage of Americans with no opinion on the Barrett vote is strikingly lower than it has been for any other nominee in Gallup’s history.”

What does Brenan mean by “strikingly lower?”

According to her, on average 25 percent of Americans had yet to form their opinion of previous supreme court nominees in Gallup’s “initial measure” of public sentiment. Meanwhile, 22 percent of Americans remained undecided “in the final measurement before the last eight justices were confirmed.”

“Several factors may be contributing to the high proportion of Americans expressing an opinion on Barrett’s confirmation,” Brenan opined. “Among them is the fact that the nomination process is unfolding during a presidential election campaign in which millions of voters have already cast their ballots.”

In other words, this nomination is taking place at a moment of peak polarization in American politics.

The scuttled Garland nomination has put several GOP senators – most notably Lindsey Graham of South Carolina – in the unenviable position of having to eat their words when it comes to advancing Barrett’s nomination.

“I want you to use my words against me,” the Senate judiciary chairman said four years ago. “If there’s a Republican president in 2016 and a vacancy occurs in the last year of the first term, you can say Lindsey Graham said let’s let the next president, whoever it might be, make that nomination.”

At the time he originally adopted his position, Graham was an ardent #NeverTrumper – but he underwent a political metamorphosis and is now viewed as an ally of Trump.


Graham’s committee is set to vote on Barrett’s nomination later today – setting the stage for a vote on the floor of the U.S. Senate sometime Monday (October 26, 2020). Democrats plan on boycotting the committee vote, but party leaders have acknowledged there is nothing they can do to stop the nomination from moving forward after only two GOP senators indicated a willingness to break ranks with the White House.

Lisa Murkowski of Alaska and Susan Collins of Maine both said they would side with Democrats in blocking any nominee advanced by Trump, but Mitt Romney of Utah – a harsh critic of the president – surprisingly sided with the White House on its supreme court choice.

Had Romney joined Murkowski and Collins, Democrats would have needed only one more vote to sink Barrett’s confirmation.

Barrett’s confirmation has also set up a much larger fight between Republicans and Democrats over the composition of the high court, with Democratic presidential nominee Joe Biden and other party leaders refusing to rule out packing the court with new liberal justices in the event they emerge victorious on November 3.

The court-packing issue was a bone of contention during the chaotic first presidential debate between Trump and Biden three weeks ago.