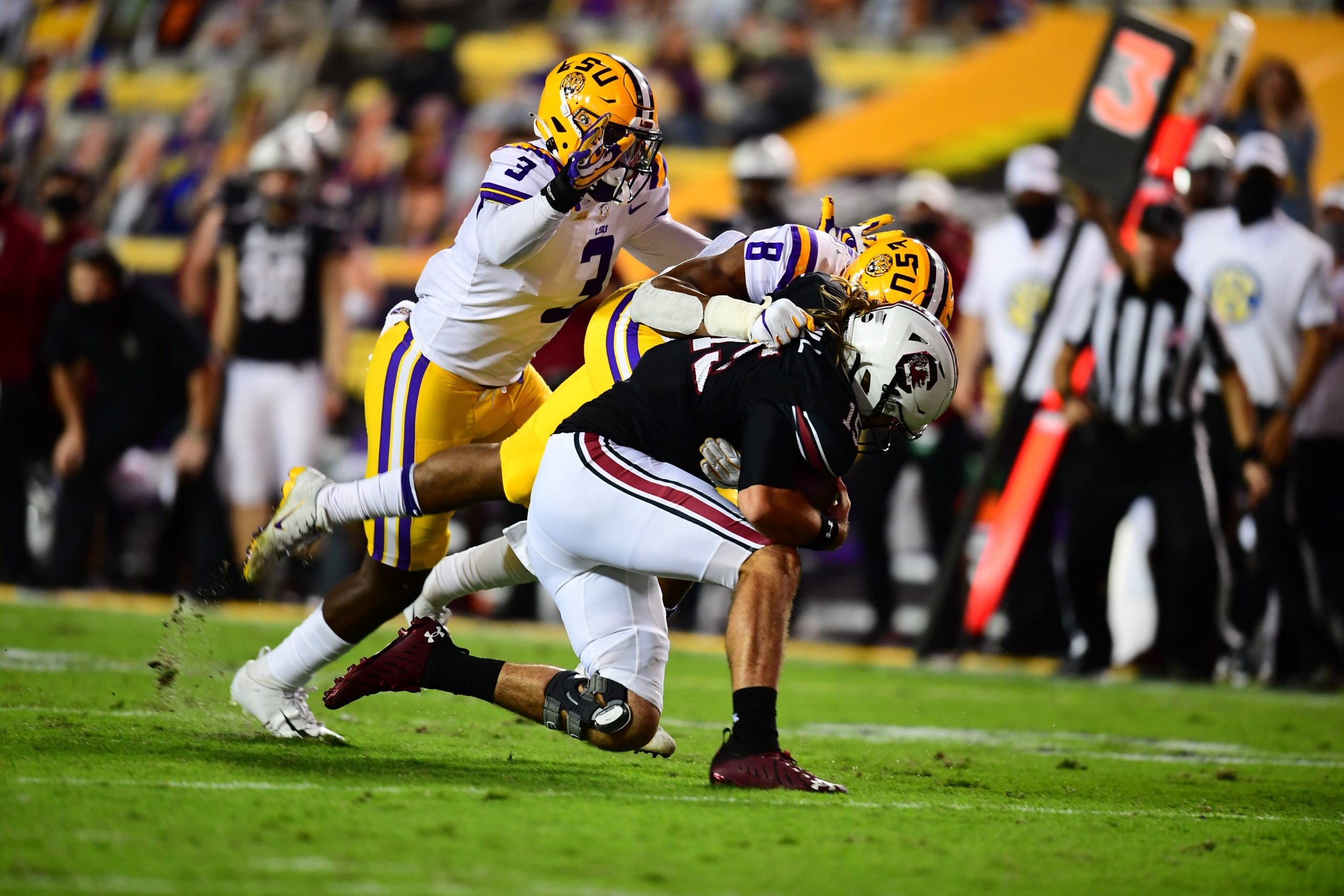 The University of South Carolina football team had all the momentum in the world heading into Baton Rouge, Louisiana on Saturday evening. Meanwhile, the defending national champion LSU Tigers – who began the season ranked No. 6 in the nation – had dropped two of their first three games en route to the most anemic title defense since Michigan’s season-opening swoon way back in 1998.

Head coach Will Muschamp’s Gamecocks were coming off of their first home victory over a ranked team in four years – a gutsy 30-22 win over then-No. 11 Auburn that showcased the athletic talent South Carolina has been able to assemble on both sides of the football in the aftermath of 2019’s 4-8 debacle.

For the first time in a long time, perpetually crestfallen Gamecock fans were starting to believe again … and the prospect of an upset over the Bayou Bengals and a return to the national rankings for the first time in over two years seemed well within reach.

Seriously … how could the stars have aligned any better?

LSU was playing without its starting quarterback Myles Brennan – who suffered a torn muscle in his abdomen during the Tigers’ loss to Missouri on October 10, 2020. Also, the usually decisive home field advantage enjoyed by the Tigers (night games at Death Valley are among the most forbidding road trips in all of college football) was largely taken out of play due to Covid-19 crowd restrictions.

Everything seemed in the offing for a Gamecock upset …

In fact, many of those who have spent the better part of the past two years calling for Muschamp and South Carolina athletics director Ray Tanner to be fired began contemplating the crow they might have to consume in the event his team recorded a second consecutive odds-defying victory.

Was Muschamp, in fact, about to take another huge step forward in his bid to take the Gamecock program “where it hasn’t been before” – as he promised he would do in the aftermath of last November’s embarrassing loss to Texas A&M (the last time the Gamecocks went on the road against an SEC western division opponent)?

It certainly seemed so …

ESPN analysts David Pollack and Kirk Herbstreit picked South Carolina to pull off the upset, as did Jordan Rodgers and Tim Tebow of the SEC Network.

The buzz was back in Columbia, S.C. – or at least it was until the game happened.

That’s when the chickens – as they have done so often in their nearly 130-year history – laid an egg.

The Tigers’ offense amassed a staggering 541 total yards and 29 first downs against a Gamecock defense that couldn’t stop the run (276 yards on 54 attempts) or the pass (265 yards on 21 attempts).


South Carolina – which entered the game ranked No. 1 in the conference (and eighth nationally) on third down defense – gave up eight of ten conversions against the Tigers. LSU also became the first team to convert a fourth down attempt against coordinator Travaris Robinson’s unit all season.

Throw in three missed field goals from senior placekicker Parker White, five sacks surrendered by the Gamecocks’ offensive line and a costly pick-six interception thrown by graduate transfer Collin Hill and it’s not hard to see how this game got out of hand – with LSU entering the locker room with a 31-10 advantage.

“We got out-coached and outplayed, call it like it is,” Muschamp said after the game.

We’ve been calling it like it is, coach … even when you haven’t been able to handle it.

Still, South Carolina had a chance to make the game competitive again after coordinator Mike Bobo’s offense marched 74 yards in nine plays to cut the Tigers’ lead to fourteen points with 11:17 remaining in the third quarter. The scoring drive was keyed by a 49-yard run from sophomore tailback Kevin Harris – who tallied his fourth career 100-yard game on the ground with 126 yards on 12 carries (including a pair of touchdowns).

A quick scoring march was exactly what South Carolina needed to open the second stanza – and it appeared as though LSU might put itself into a major hole on the ensuing kickoff when sophomore wide receiver Trey Palmer muffed the ball at the Tigers’ five-yard-line.

In true “Chicken Curse” fashion, though, this potentially game-changing moment quickly turned into a back breaker for South Carolina.

Not only did Palmer manage to retrieve his fumble, he found a crease in the coverage, eluded freshman kicker Mitch Jeter and raced down the Gamecock sideline for a 95-yard touchdown – the first kick return for a score at Death Valley since 1981.

And Muschamp may never recover – although for the second consecutive season, his employer literally cannot afford to fire him.

“Muschamp and his staff won’t get fired this year, not with the state of athletic department finances,” noted Ben Breiner for The (Columbia, S.C.) State newspaper.

Maybe not, but as LSU piled on two more touchdowns, social media erupted in a torrent of vitriol for Muschamp – which rapidly re-escalated the temperature under the 49-year-old head coach’s hot seat.

Tanner – who has backed his head coach to the hilt – was the focus of equally brutal criticism.

“Drastic changes are needed, but if we can’t buy out Will Muschamp this year – and the perception is, you can’t fire a coach while teams are cutting programs because of Covid – at least you can fire Ray Tanner,” Gamecock fan Joshua Ott noted. “He’s as bad an an AD as he was great as a baseball coach.”

Indeed … especially after the embattled athletics director supported a raise and contract extension for Muschamp following an underwhelming 2018 season.

Seriously, if you reward mediocrity a funny thing happens – you get more of it.

The Gamecocks (2-3) will have a week to stew over this humiliating loss before welcoming No. 7 Texas A&M to Columbia, S.C. on November 7. The Aggies (3-1) have won all six of their matchups with South Carolina since becoming the Gamecocks’ permanent SEC western division foe in 2014 – a streak that began with this 52-28 drubbing.

After that, South Carolina goes on the road on November 14 against Ole Miss (1-4), plays at home on November 21 against Missouri (2-2) and the following week against No. 4 Georgia (3-1) prior to closing out the regular season on the road against Kentucky (2-3).

As previously noted, the Gamecocks will not face their in-state rivals Clemson University this fall thanks to the SEC’s controversial conference-only scheduling format. That spineless decision by the SEC put an end to the longest continuously running, non-conference rivalry in American football – a game which has been played every year dating back to 1909.

It does spare the uncouth Muschamp another lopsided loss in a rivalry game, though …

Midway through his fifth season in Columbia, Muschamp is now 28-28 overall with a 17-20 record against conference opponents. He is 1-2 in bowl games, 0-4 against Clemson, 1-4 against Florida, 1-3 against Georgia and 3-14 against ranked opponents.

Prior to coming to South Carolina, Muschamp went 28-21 in four seasons at Florida including a 17-15 conference mark and a 5-14 record against ranked opponents. Of interest? Muschamp posted a 1-3 mark against South Carolina during his tenure in Gainesville from 2011-2014.

Muschamp lost 13 of his final 22 games at Florida and has now dropped 14 of his last 22 at South Carolina.