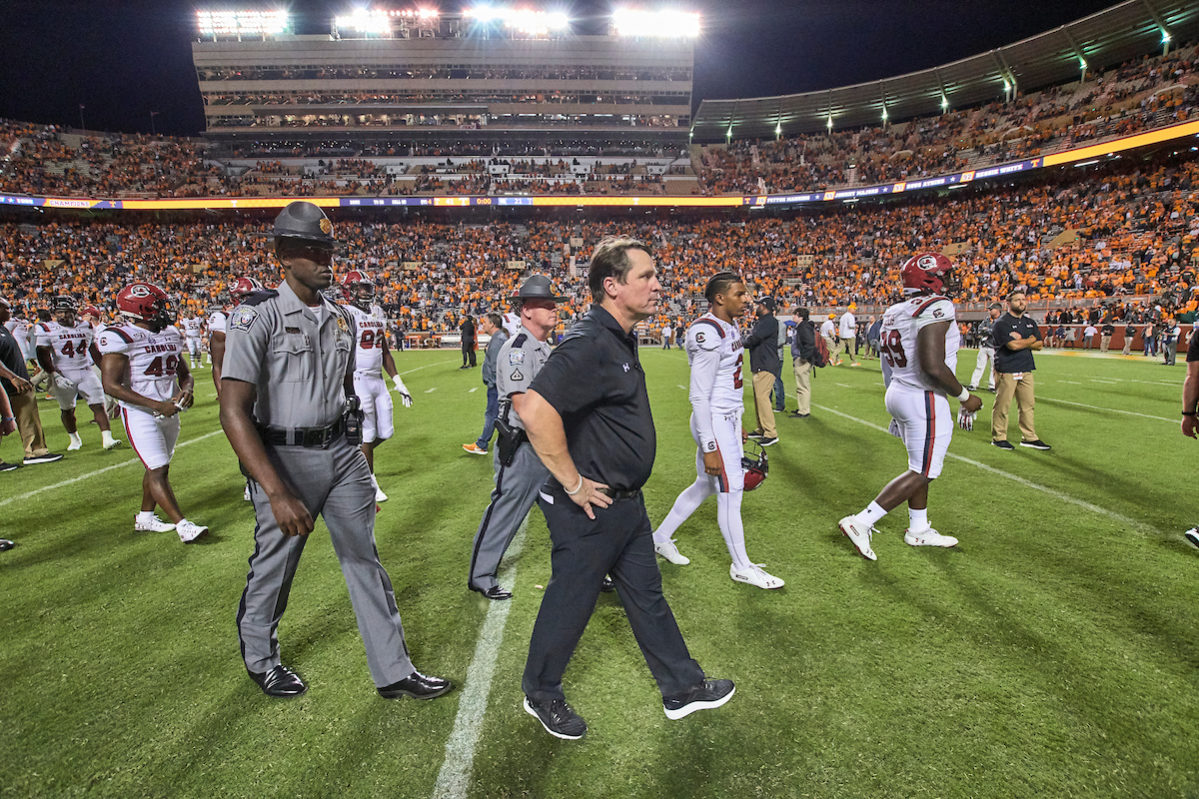 Moments after one of the most influential members of the University of South Carolina board of trustees signaled his “100 percent” support of Ray Tanner’s leadership of the school’s struggling athletics department, Tanner paid it forward – issuing a statement affirming his support for embattled fourth-year head football coach Will Muschamp.

Not only that, the statement indicated Tanner was joined in this sentiment by new school president Robert Caslen – who was chosen to his post this summer by a bitterly divided board of trustees.

Our guess? That division is about to escalate …

The statement came less than a day after sources alleged that the powerful trustee in question – political kingmaker Eddie Floyd of Florence, S.C. – had been meeting with potential replacements for Tanner.

Armed with Floyd’s definitive rebuke of these rumors, Tanner wasted little time in backing Muschamp to the hilt …

“Today, I want to make it clear that Will Muschamp is our football coach and will be our coach going forward,” Tanner said in a statement released by the athletics department. “President Caslen and I are fully supportive of his leadership and his development of student-athletes on and off the field. Coach Muschamp and our staff are dedicated to the success of Gamecock football. They have built a program where our team plays for each other and for our University, and they deserve our support. While we wish the outcome of some of our games would have been different, we are excited about the future of our program.”

Tanner’s statement of support for Muschamp isn’t surprising … at least not when you assess the financial math associating with firing the struggling head coach.

While any other coach in Muschamp’s position probably would have been fired by now, Tanner and the university’s board negotiated a massive $22 million buyout for the 48-year-old native of Rome, Georgia. That buyout dips modestly to $18.6 million at the end of the year, but the thinking is the school is not going to shell out that kind of cash to get rid of him – meaning Muschamp likely has at least one more year in Columbia, S.C. to try and turn things around.

Against ranked opponents, Muschamp has posted a 2-11 mark at South Carolina.

In four years at Florida he wasn’t much better – going 28-21 overall and 17-15 against SEC opponents. That led to Muschamp getting run out of Gainesville on a rail … although the Gators had to pay him a $6.3 million buyout.

If that was the buyout figure facing Muschamp in Columbia, he would not be the Gamecocks coach right now.

After all, South Carolina is a state with a long, bizarrely proud legacy of rewarding mediocrity … and as we have consistently noted in covering the ongoing implosion of Muschamp’s program, both he and Tanner are likely to continue benefiting from the state of division and dysfunction enveloping the university.

Still, Muschamp’s struggles are very real … and becoming harder for even his most ardent supporters to ignore. In addition to his team dropping a majority of the toss-up games it needed to win, South Carolina has also lost two of four this season against the teams it was supposed to beat.

Not surprisingly, recruits (and players) are seeing the writing on the wall … which is likely to only worsen the trajectory issues.