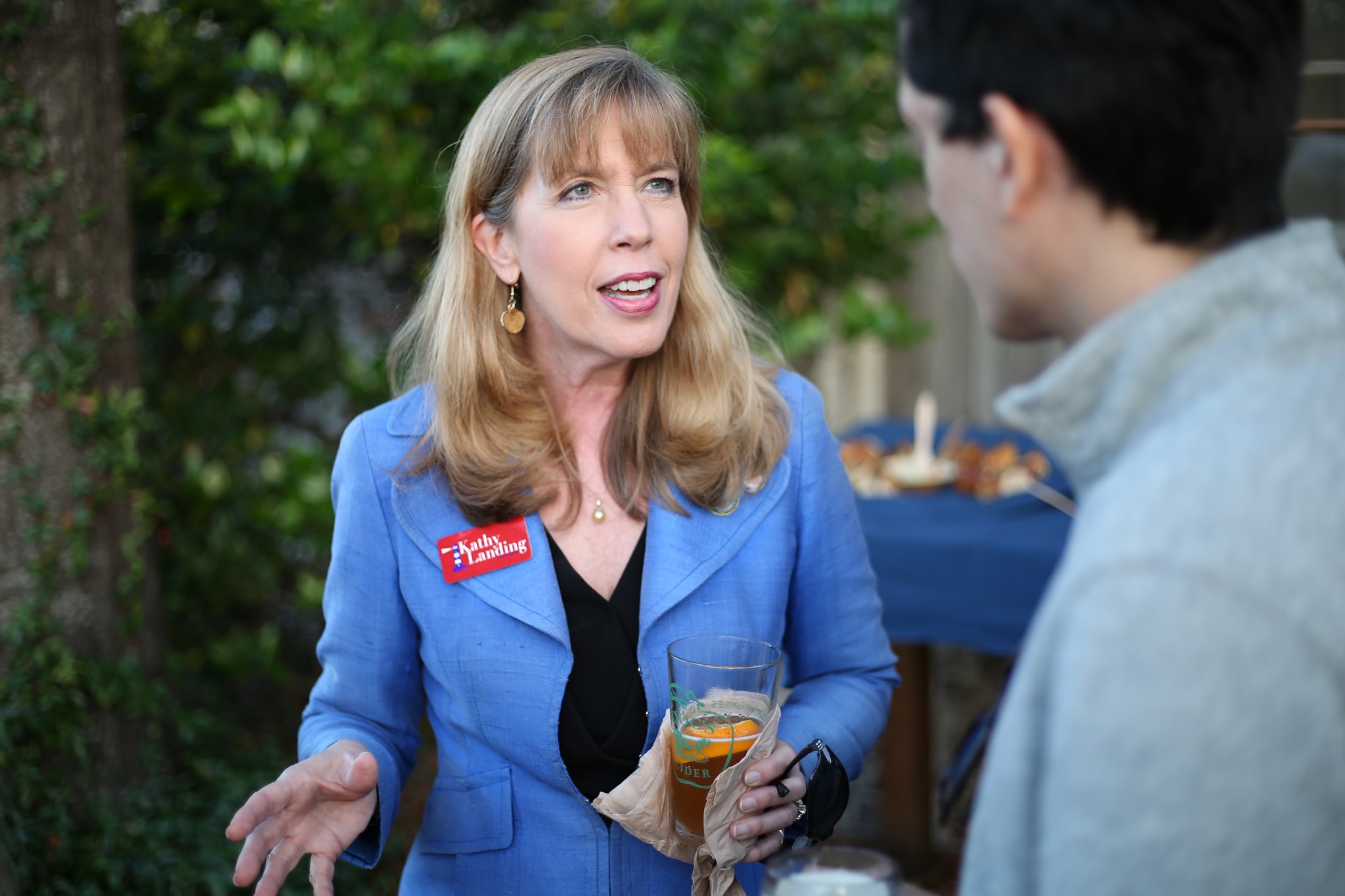 In case you missed it, a frontrunner has emerged in the race for the Republican nomination in South Carolina’s first congressional district. Her name? Nancy Mace. The second-term state lawmaker from Daniel Island, S.C. is leading the GOP field for this seat in polling, fundraising and endorsements … prompting national Democrats to launch an opposition research blitz on her.

But Mace’s ascendency isn’t stopping another GOP contender from making a major push in this contest … which will determine which Republican gets to go up against first-term incumbent Democrat Joe Cunningham next November.

Mount Pleasant, S.C. town councilwoman Kathy Landing jumped back into this contest in a big way over the holiday weekend, launching a television commercial during Saturday’s football game between defending national champion Clemson University and its arch-rival, the University of South Carolina.

In other words, the ad got a lot of eyeballs …

“Our Congressman filled his campaign coffers with money from Adam Schiff then voted for the impeachment inquiry,” Landing stated in the ad. “Is that the real quid pro quo?”

She then goes on to introduce herself to voters as “a conservative, job-creating financial planner, who is running for congress to solve the problems that matter most to you.”

“Joe Cunningham misled the Lowcountry last cycle into thinking he would be a different kind of Democrat, but his record tells the truth – voting with the radicals in his party like Nancy Pelosi, Adam Schiff and Alexandria Ocasio-Cortez over 85 percent of the time,” Landing said in a release accompanying the launch of the spot. “This ad is just one way that I will lead the effort to ensure Joe is held accountable for putting his party over the Lowcountry and putting partisan politics above progress for the district he is supposed to represent.”

Landing added that the Lowcountry “deserves a member of congress who understands what it takes to support the President’s strong economic policies and who is also committed to lowering healthcare costs, fixing infrastructure, and balancing budgets.”

We find it interesting that Landing is going after Cunningham rather than targeting Mace – who represents her immediate opposition for this seat. Perhaps she believes other GOP candidates – notably Beaufort county councilman Michael Covert – are going to continue training their fire on Mace over the course of the primary campaign.

To be clear: Cunningham has not voted to support articles of impeachment against Trump. Not yet, anyway. He merely voted to advance the impeachment inquiry in the U.S. House. Also, the first-term Democrat – who fancies himself as an “ocean engineer” – has been on the receiving end of some surprising Republican and conservative support in his district, while national GOP efforts to turn voters against him have largely backfired.

All of this has helped Cunningham advance his “Lowcountry over Party” narrative, although that refrain could be imperiled by his participation in a party-line vote to impeach Trump.

Bigger picture, the first district is demographically evolving … although it did back Trump by more than 13 percentage points in the most recent presidential election.

Landing, 56, announced her candidacy back in June – touting herself as “a strong conservative Republican businesswoman ready to represent our South Carolina values in congress” as well as “a proud military wife who believes in our nation’s founding principles and who knows that socialism and government dependence are not what our founding fathers envisioned for our nation.”

She also vowed to take her financial expertise to Washington, D.C. “to protect Lowcountry taxpayers and ensure congress sets a responsible financial plan for our nation’s future.”

After losing both of her parents as a child, Landing was raised by her half-brother – a chaplain with the U.S. Marine Corps. She went on to attend Duke University, and later earned a master of science degree in financial planning.

While Landing has not been able to match Mace in fundraising, she had an estimated $300,000 in her campaign coffers at the end of the third quarter of 2019 – buoyed by $279,000 in loans made by the candidate to her electoral committee. That investment – and Landing’s commitment to spend more, if necessary – should keep her competitive in this race.

GOP voters will select their nominee in June, with the general election against Cunningham scheduled for November. So far no credible third party challengers have emerged, although now that former S.C. governor Mark Sanford’s 2020 presidential fantasy is over some are continuing to speculate that he might consider running for the seat as an independent.