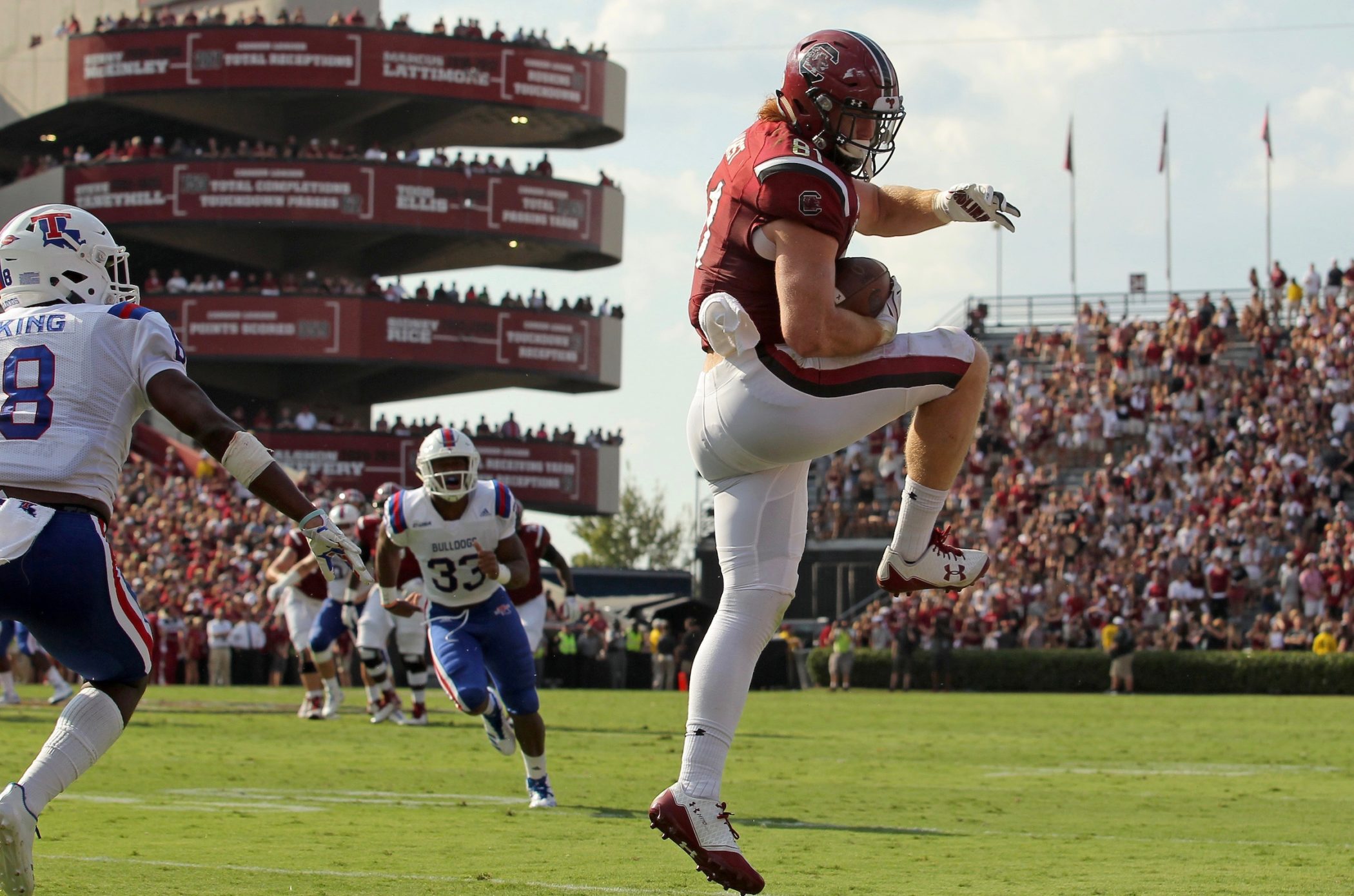 Former University of South Carolina tight end Hayden Hurst was selected in the first round of the 2018 National Football League (NFL) draft by the Baltimore Ravens on Thursday – the 13th Gamecock chosen in the first round all-time (and the eighth since 2000).

Hurst was taken with the 25th overall pick of the draft.

The 24-year-old Jacksonville, Florida native has been through a lot in his quarter century on the planet.

In fact there’s an amazing story from Bleacher Report‘s Dan Pompei chronicling how Hurst went from a frustrated flameout in the Pittsburgh Pirates minor league baseball system to the top tight end chosen in this year’s draft.

Hurst’s low point was 2015.  He had just given up on baseball due to an inability to control his pitches (a.k.a. the “yips”).  The problem surfaced early in Hurst’s professional career, and after nearly two years spent trying to figure out why his 97-mile-per-hour wasn’t hitting the mark – he hung up his glove.

Hurst’s new plan was to play football at the University of Florida, but the school withdrew a preferred walk-on offer it had promised him.

Hurst was given a shot with the Gamecocks after backup quarterback Perry Orth convinced former South Carolina assistant coach Steve Spurrier Jr. to take a look at the 22-year-old prospect.  Spurrier Jr. liked what he saw, and Hurst received a preferred walk-on offer from South Carolina – as a wide receiver.  He went on to catch eight passes for 106 yards during the Gamecocks’ forgettable 2015 campaign.

That could have been it for Hurst … but it wasn’t.

When Will Muschamp took over as the Gamecocks’ new head coach, Hurst was moved to tight end and immediately became an impact player in the revamped South Carolina offense.  In two seasons, Hurst caught 92 passes for 1,175 yards – including three touchdowns.  He also ran the ball 11 times for 39 yards and a touchdown.

Last year he was a first-team All-SEC selection by both The Associated Press and the league’s coaches.

An adept blocker at the line of scrimmage and downfield, Hurst is the complete package at the tight end position.  His size, speed, agility and crisp route-running regularly created mismatch problems for opposing defenses in the Southeastern Conference (SEC) – and are expected to do the same in the NFL.  He’s got tremendous hands, amazing “ups” and gets tough yards after the catch – especially in clutch situations.

The only downside?  He’s a 25-year-old rookie … meaning the Ravens are taking a bit of a gamble when it comes to his potential longevity in the league.

Still, Hurst is as tough as they come … and we’re not just talking about his 6-foot-5, 250-pound frame.  He’s mentally durable as well, having overcome some serious obstacles to make it where he is today.

Seriously … can you imagine how Hurst must have felt in 2015 when Florida told him they gave his roster spot to someone else?  Especially coming so soon on the heels of his humiliating exit from minor league baseball?

Talk about a nadir …

Props to Hayden Hurst for pushing through all of it and becoming the nation’s best college football player at his position.  We wish him nothing but success at the next level (except when he’s playing our founding editor’s beloved Indianapolis Colts, of course).

Dilly Dilly? Not At Augusta