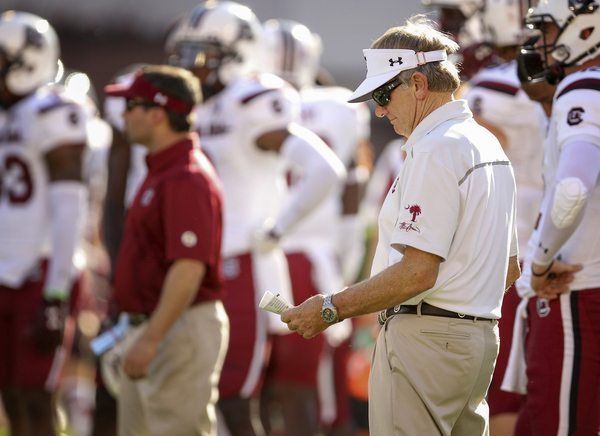 INTERIM HEAD COACH TO BE ANNOUNCED …

Sports Illustrated‘s Thayer Evans broke the news nationally.  Shortly thereafter, FootballScoop.com reported that Spurrier’s retirement was effective immediately and that an interim head coach would be named on Tuesday morning.

According to The (Columbia, S.C.) State newspaper, the interim job will go to current quarterbacks coach G.A. Mangus.

That report was disputed, however, with multiple media outlets reporting early Tuesday that the interim gig would go to offensive line coach Shawn Elliott. 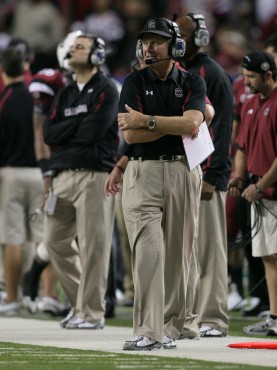 Spurrier, 70, has won 228 games in 26 seasons as an NCAA Division I-A coach – including a school-record 86 games at South Carolina over the last eleven years.  He also won a dozen games (against 20 losses) during two seasons as head coach of the National Football League’s Washington Redskins.

Prior to his arrival in Columbia a decade ago, the Gamecocks had won 10 games in a season just once (in 1984).  After a middling first few years at the helm, Spurrier’s teams embarked on an unprecedented run of success – recording three straight 11-win seasons, three straight Top Ten finishes and three straight New Year’s Day bowl victories from 2011-13.

The Gamecocks also captured an SEC Eastern Division title in 2010 and won a school-record five straight games over arch-rival Clemson from 2009-13.

Last year South Carolina slipped to a 7-6 record, though, and rumors of Spurrier’s imminent retirement prompted numerous recruiting defections.  In fact the Gamecocks have lost considerable ground on the recruiting trail in recent years – with Spurrier shouldering his fair share of the blame.

This year has been an unmitigated disaster for his team, with the Gamecocks (2-4, 0-4 SEC) finding themselves totally outmatched in conference play.  After a 45-24 thrashing last week at the hands of Louisiana State University and Heisman Trophy frontrunner Leonard Fournette, the Head Ball Coach had apparently seen enough.

Spurrier also guided the Gamecocks to a 5-4 bowl record – not bad for a program that had won just three bowls in more than century of football prior to his arrival.

While Spurrier took the Gamecock program to unprecedented heights, he never duplicated the level of success he achieved during his twelve years at Florida.  He posted a 122-27-1 mark in Gainesville – winning six SEC championships, eight division titles and one national title in 1996.

As a player, Spurrier won the 1966 Heisman Trophy at Florida prior to embarking on a ten-year career in the NFL.

Within moments of the news of Spurrier’s resignation breaking, speculation about possible long-term replacements was already swirling.

AFTER SPURRIER: OFFENSE? OR DEFENSE?

Few expect Mangus or Elliott to be serious contenders for the job, but there’s obviously precedent in the Palmetto State for interim head coaches to take the reins of major college programs – and experience success.  For example Dabo Swinney, a wide receivers coach, took over as head coach at Clemson after Tommy Bowden was fired during the 2008 season.  After a rocky first three years, Swinney led the Tigers to four straight 10-win seasons.

Clemson is off to a 5-0 start this season and is ranked No. 6 in the nation – due in no small part to Swinney cleaning up on the recruiting trail.  Of course the driving force behind the Tigers’ success on the field the last few years has been defensive coordinator Brent Venables – who needed just two years to turn a porous unit into the nation’s No. 1 defense.

Maybe that’s the model the Gamecocks should follow: Installing a “hype man” as head coach and focusing their efforts on landing top tier coordinators.