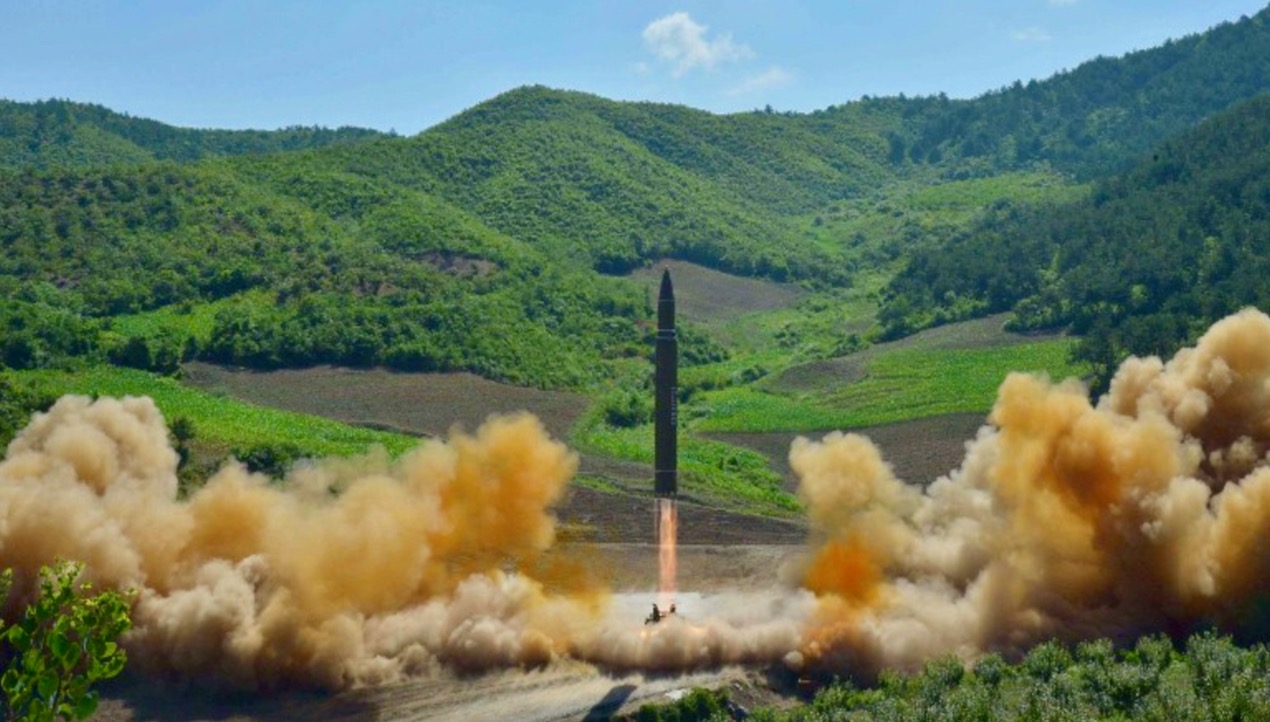 The missile program of the Democratic People’s Republic of Korea (DPRK – a.k.a. “North Korea”) took another quantum leap forward this week with the launch of an intercontinental ballistic missile (ICBM) capable of reaching Alaskan soil.

The new missile – dubbed the Hwasong 14 – was launched from a complex in Panghyon, in the North Pyongan province.  It flew for nearly forty minutes and soared to a height of 1,741 miles – both new records for the Korean missile program.

The projectile fell into the Sea of Japan, but had it been launched from a standard trajectory it could have flown as far as 3,800 miles.  In other words, the missile could have easily reached the center of Alaska (3,500 miles away from the launch site).

Scary?  Yes … although at this point it remains unclear whether the regime of socialist monarch Kim Jong-un is capable of weaponizing the missile (or for that matter successfully targeting it).  Furthermore, the United States recently completed a successful intercept test against an incoming ICBM – providing some measure of defense against any preemptive North Korean strike.

Nonetheless, Korea Central Television (KCTV) referred to the new missile as “a very powerful ICBM that can strike any place in the world” and called its test launch “a major breakthrough in the history of our republic.”

The first claim is debatable, but the latter claim is clearly accurate.  North Korea’s missile program has made dramatic strides over the last year – and appears poised to continue expanding in capability unless it is somehow checked.

Kim observed the latest test personally, with KCTV video showing him watching the launch through a pair of binoculars – then grinning and clenching his fist afterward as the missile soared toward the sky.

In Washington, D.C. – which was poised to celebrate the 241st anniversary of the signing of the Declaration of Independence – the test drew an angry rebuke from U.S. president Donald Trump.

“Does this guy have anything better to do with his life?” he added, referring to Kim.  “Hard to believe that South Korea and Japan will put up with this much longer. Perhaps China will put a heavy move on North Korea and end this nonsense once and for all!”

China already put a “heavy move” on North Korea, actually (several of them).  It doesn’t appear to be working though.

As stated repeatedly in the past, we’ve never had a problem with North Korea’s nuclear program – so long as it wasn’t a threat to the American homeland or to vital national interests abroad.

For years North Korea has been incapable of backing up its threatening rhetoric against our country, but that doesn’t seem to be the case any longer.  And Kim has demonstrated repeatedly through his barbaric purges that he is a sadistic madman with

With the American homeland now coming in range of Kim’s growing arsenal – and with him continuing to run his mouth about wanting to use nuclear weapons against our people – we believe it is time for the Trump administration to articulate a new policy toward North Korea.

Call it the “Kim Doctrine.”

It shall be the policy of this nation to regard the launch of any armed, intercontinental ballistic missile against the United States – or any of its territories – as an act of war, one requiring an immediate and disproportionate retaliatory response.

And in case there were any question as to the meaning of a “disproportionate retaliatory response,” we’re sure Trump can get colorful on Twitter.

Whatever words are used to articulate the policy, its bottom line must be as follows: Launch a nuclear projectile against America and your nation will be wiped off the face of God’s green earth … forever.

This website prides itself on support for non-interventionist foreign policies.  We don’t believe in American imperialism … even if America could afford it.  And as previously noted we do not begrudge North Korea for developing its weapons systems and competing within its sphere of influence.

Having said that, Kim’s ongoing threats of aggression against our nation – coupled with his enhanced ability to carry out those threats – demand a clarification of American policy.  And the resolve to back it up.

Ron Paul: “We Must Declare Independence”

America: “The Powerful Play Goes On”