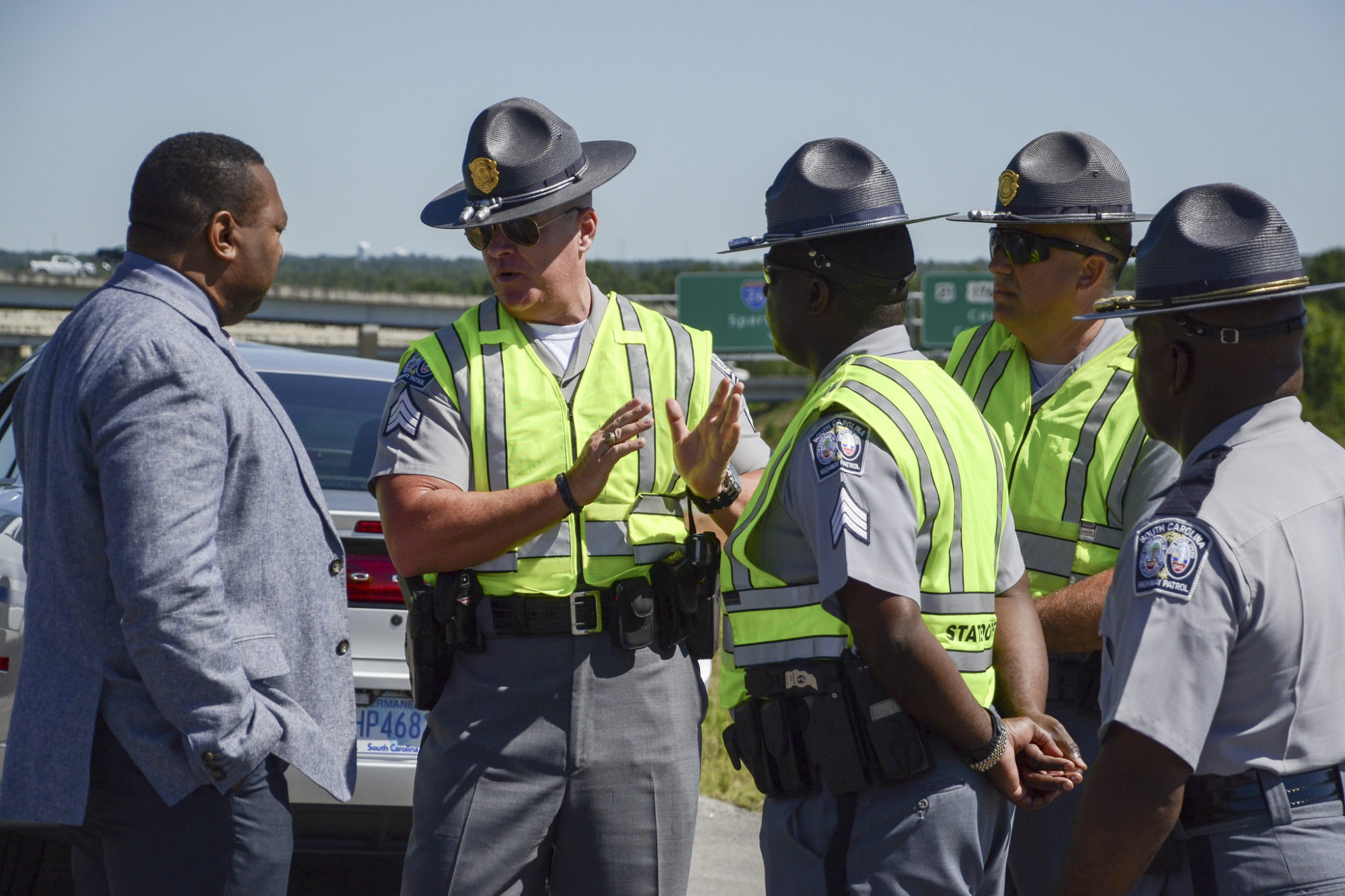 These are just a few of the allegations currently being investigated by the S.C. House legislative oversight committee related to the S.C. Department of Public Safety (SCDPS) and its embattled director, Leroy Smith.

As we noted in several recent stories (here and here), Smith’s agency is in real trouble … and has been for some time.  In fact several months ago we encouraged new S.C. governor Henry McMaster to make Smith one of his first “fires.”

This week members of the S.C. House of Representatives agreed, voting overwhelmingly to strip Smith’s salary from the state’s bloated $28.9 billion budget.  That vote – spearheaded by S.C. minority leader Todd Rutherford – cleared the chamber by a 76-20 margin.

What prompted such broad, bipartisan support for Smith’s removal?

According to documents obtained by this website, House oversight members – including Rutherford – have been provided with damning statistics related to Smith’s job performance.

The documents also noted a dramatic decline in the number of safety citations issued by SCDPS under Smith’s reign – which has caused a troubling “ripple effect.”  Because state lawmakers in South Carolina do not fund law enforcement commensurate with its role as a core function of government – forcing it to rely on fees from traffic citations instead – this has starved the agency of desperately needed resources.

“In addition to protecting the public through enforcement of safety laws, failing to keep the number of citations the same … caused a decrease in funding to the Criminal Justice Academy, which trains law enforcement officers across the state,” the documents stated. 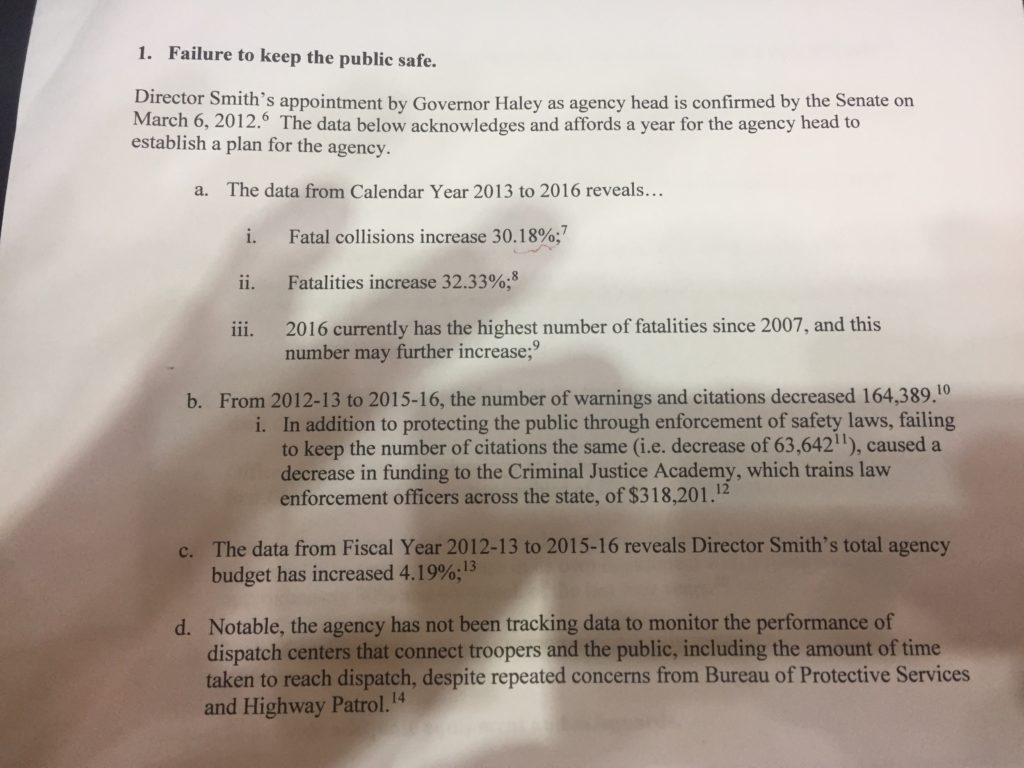 Another section of the documents provided to the committee blistered Smith’s agency for its “failure to recruit and retain (an) adequate number of personnel to keep the public safe.”

“On average, (S.C. Highway Patrol) Troops have less than 60 percent of the manpower the agency’s personnel allocation model states is needed,” the documents concluded.

It was also alleged that between 2012 and 2015, Smith’s agency spent as much as $21.1 million on training and equipment but only added two new troopers to the state’s thinning ranks. 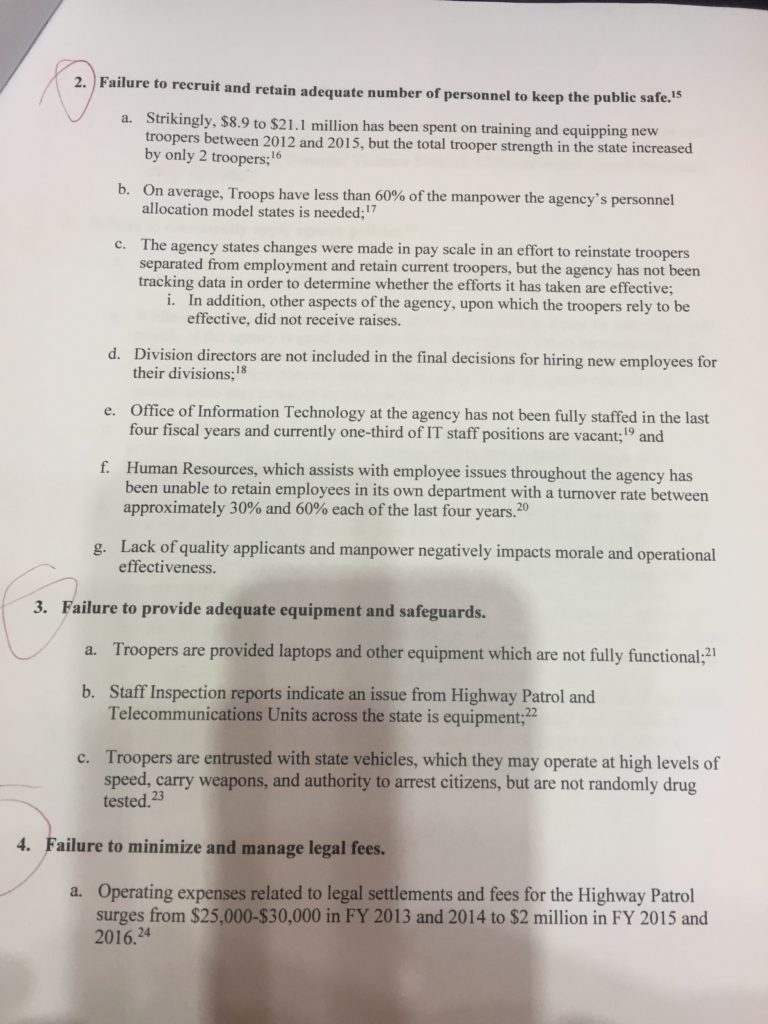 As we reported back in December, it’s estimated there are anywhere from 760 to 835 troopers currently patrolling South Carolina’s highways – which falls well short of the 1,200 figure considered “optimum” for safeguarding Palmetto State motorists.

These Trooper shortages have been especially pronounced in the Upstate region of South Carolina – including Spartanburg County.

“Public safety (is) at extreme risk,” one of our whistleblowers noted at the time.

In addition to these concerns, Smith’s agency has been criticized for failing to “consistently apply agency policies” when it comes to disciplining troopers for misconduct.

“Data provided by the agency shows inconsistencies in addressing matters have impacted morale at the agency, led some personnel to believe headquarters does not support them and tied up agency resources in matters some may consider inconsequential,” one of the documents provided to the committee noted. 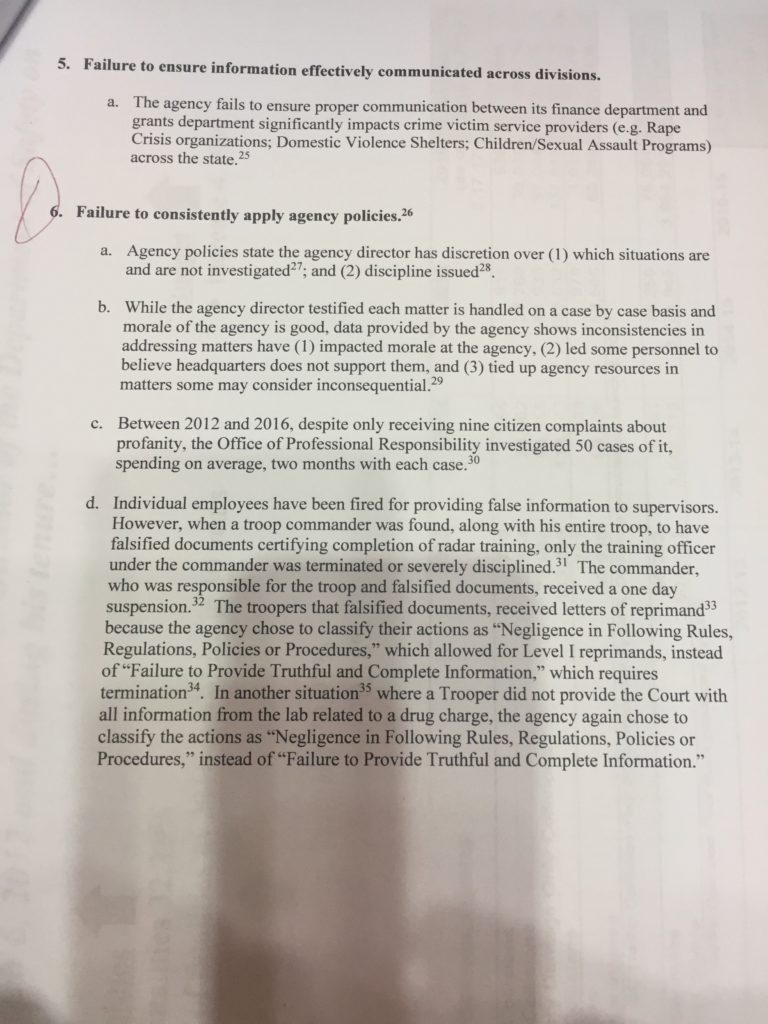 Smith, who is black, has a history of playing the race card in response to criticism – and has also been accused of discriminating on the basis of race in discharging his duties at SCDPS.

Despite all of this, McMaster has opted to stick with him – a decision that shocked legislative leaders of both parties.

“Hard to figure,” one ranking GOP lawmaker told us.

Another GOP leader said Smith was planning to resign his post on Tuesday – prior to learning of McMaster’s continued support for him.  Instead he issued a statement referring to the House’s decision to strip his salary as “disappointing.”

“This will be an albatross around Henry’s neck,” the lawmaker said.

It’s not clear when the House oversight committee – chaired by Weston Newton – will finish its investigation into SCDPS, but we’re told one of its subcommittees is working on the report now.

Newton – who posts all of his committee’s materials online – declined to comment on the particulars of the investigation except to say his committee was “troubled by what we have learned so far and believe significant changes to the agency are necessary.”

Smith was appointed against our advice by former governor Nikki Haley in 2012.  And while we do not approve of lawmakers attempting to fire him (his job status is the exclusive purview of the executive branch of government), that doesn’t change the fact that the outcomes his agency has produced are simply unacceptable.

McMaster previously showed no hesitation in obtaining the resignation of one of Haley’s cabinet members whose agency had produced similarly unacceptable results.  That’s what makes his failure to take the necessary action in this case so disappointing.

South Carolina Is A “Moocher” State