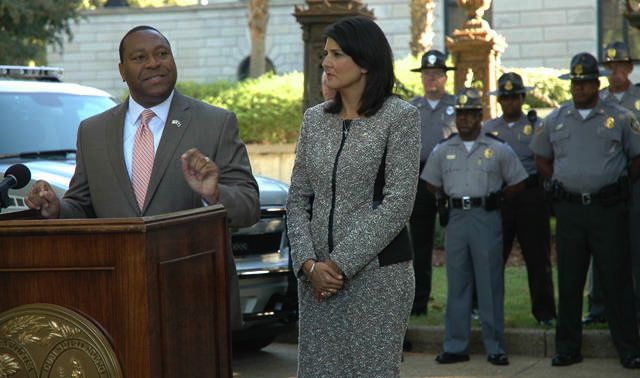 S.C. Gov. Nikki Haley’s top law enforcement officer is discriminating against white employees, multiple sources within the S.C. Department of Public Safety (SCDPS) tell FITS. In fact Leroy Smith – who once falsely accused his former superiors in Florida of racial discrimination – appears to be settling some color-based scores in his new role as head of the Palmetto State’s largest law enforcement agency.

News of Smith’s alleged racist hiring practices came to light following the forced termination of Bobby Collins – who was hired in May 2012 to lead the agency’s internal affairs division. Collins – who is black – was fired in the wake of a January 10 traffic stop in which he verbally accosted Highway Patrol officers who observed him driving erratically.

According to our sources, Collins was hired by Smith “for a position that was never posted for any of the troopers to apply.” Not only that, Smith – who is also black – has reportedly “promoted African-Americans to head up the State Transport Police, Bureau of Protective Services and a newly created director of operations position” without giving white troopers the chance to apply.

Additionally, Smith has named an African-American to lead a newly created immigration unit – a job we’re told was never posted publicly – and has elevated a deputy director and promoted two patrolmen to the rank of major (also allegedly on the basis of race).

SCDPS officials did not immediately respond to our request for comment regarding these allegations – nor do we expect them to. This website made SCDPS our personal piñata during the “Sex, Lies and Troopers” scandal back in 2011, and there is no shortage of hard feelings among the agency’s brass.

Obviously we don’t know enough about each of these hirings to determine whether more qualified white applicants were available for the jobs. Nor are we saying the black officers appointed by Smith aren’t up for their new assignments – they very well could be.

Our point in posting this is simple … to demonstrate the duality of discrimination allegations.

Seriously … does anyone think the state’s left-leaning mainstream media would have hesitated for a second to print allegations of discrimination involving a white supervisor promoting white employees to jobs previously held by blacks?

So Bakari Sellers Got Popped For DUI