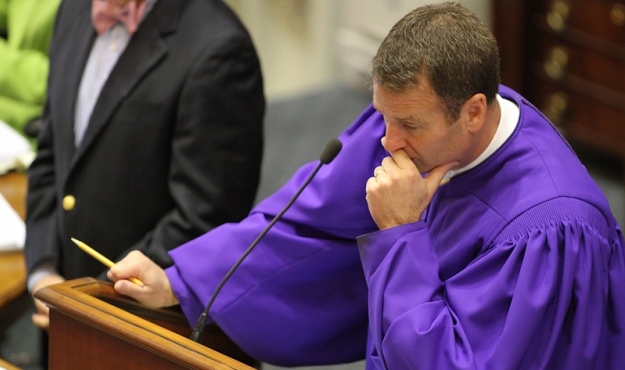 Remember Ken Ard?  He was elected lieutenant governor of South Carolina in November 2010 – but was forced to resign his office in March of 2012 due to a “cash for contributions” scandal exclusively unearthed by this website.

Ard’s prosecution was handled by S.C. attorney general Alan Wilson – who at the time was aggressively promoting his image as a righteous crusader against public corruption.

According to multiple sources familiar with the 2012 prosecution of Ard, Wilson’s office integrally involved the neo-Confederate political consulting empire of Richard Quinn and Associates in the case.

Quinn is Wilson’s political advisor.  He also advises several of the politicians rumored to be at the heart of the ongoing S.C. State House probe Wilson has drawn headlines for obstructing (albeit clumsily).

“The Quinns – they were directing it,” an attorney familiar with the Ard prosecution told us.

Not only that, the attorney accused Wilson’s office of “leak after leak after leak” related to the Ard case – which is ironic considering Wilson fired the special prosecutor he appointed in the ongoing State House probe for allegedly leaking information to the media.

In one incident related to the Ard case, details from a confidential conversation between Ard’s attorneys and Wilson staffers were posted online within minutes of the end of the meeting.

“We hadn’t even gotten back to our office and the contents of the meeting were already online,” the attorney said.

What sort of “direction” did the Quinns allegedly provide in the Ard case?

According to our sources, an effort was made to use the case as a means of taking out one of the firm’s in-state political consulting rivals, Robert Cahaly.

In fact, Ard was reportedly “offered a break if he blamed Cahaly” for all of his legal issues.

Cahaly, incidentally, was recently vindicated in another case in which he was prosecuted by a public official with close ties to Quinn.

“They’ve been trying to take him out for years,” one Palmetto political consultant told us.

Let’s be clear: Ard did break the law.  And we believe he deserved to be removed from office.  But at the end of the day his crime – basically funneling his own money into his own campaign – pales in comparison to some of the shameless self-dealing that goes down on a daily basis at the State House (with your tax dollars).

Wilson built his reputation on vowing to fight that corruption … now he has become corruption’s Enabler-in-Chief.  In fact things have gotten so bad we’ve called on him to resign his office.

Why do the political machinations swirling around the Ard prosecution matter?  Because they provide a glimpse at the extent to which politics – not the law – guide the decision-making of this attorney general.  And for that matter the decisions of his two predecessors – Henry McMaster and Charlie Condon (both of whom were also clients of Quinn).

If the Quinns were indeed “directing” the prosecution of Ken Ard, how can we believe Wilson when he says they aren’t driving his transparent attempt to shut down the current probe?

Exclusively unearthed by this website in September of 2014, “the probe” has already brought down powerful former S.C. Speaker of the House Bobby Harrell – who pleaded guilty to six ethics-related counts, resigned his office and got three years of probation.  Now, however, it seems abundantly clear that the prosecution of Harrell – which Wilson doggedly pursued (as this website cheered him on) – was less about accountability and more about moving Harrell out of the way so that Wilson’s political allies could rise in the ranks.

“Once viewed as a crusader against public corruption, it’s now readily apparent Wilson has engaged in selective prosecution in an effort to benefit his political allies – many of whom are far more corrupt than the handful of politicians he’s prosecuted,” we wrote earlier this year.

His actions this week have proved us right …

“Once viewed as a crusader against public corruption,…”

For the gazillionth time, really? Would anyone really admit to ever having been so blind as to believe that? Was it really THAT hard to see that someone with Wilson’s family ties, that were tied to shameless, unrepentant crooks, would not be a good bet for AG???? Am I REALLY the only one who saw that writing on the wall and could read it? Am I REALLY that good???? Somehow, I just cannot believe so.

What’s a neo-confederate? What ever they think they are, it appears to be more lying bumpkin scum from that sorry state. Trash rallying around trash.

In 2018 looks like Alan will go back to private practice, assuming he’s not disbarred.

Well, that never happened. That redneck who went ballistic so entertainingly was the brother of that legislator tool in Darlington County (can’t remember the name) that got caught with the college cooze coming back from a 5 Points bar via that married mofo’s Columbia crib. I think he was also the “pebble in my shoe” jackhole.

I blame rare mid-day libations for my error (1 double and 1 single Bloody Mary). Please forgive. But in truth, it’s hard to keep these crooked-ass goobers straight in your head. Not to mention out there in the actual world.

Alan Wilson, I have three words for you, Jason Michael Dickey. I hope Karma is circling to bite you for that one and you get to spend some time on the inside for what you did in that case.

NEW PPP (Poll) has Trump only down 1 in Wisconsin.

Sounds good to me. Ready for some good, “hope and change”, for a change.

Republican presidential candidates Ted Cruz and Donald Trump are in a dead heat in Wisconsin just days before the state’s primary, according to a new poll.

A survey released Thursday by the left-leaning Public Policy Polling found that Cruz leads with 38 percent support, with Trump right behind at 37 percent — within the margin of error.

I read somewhere recently that George Soros had infused Katshit’s campaign with a good bit of extra cash. Hopefully, he will draw anti-trump votes from Lying Ted.

The Wilson’s have sucked off the Taxpayer tit far too long.

“In one incident related to the Ard case, details from a confidential conversation between Ard’s attorneys and Wilson staffers were posted online within minutes of the end of the meeting.”

“Online” is a big place. Where, specifically, did these details appear?

And of course we KNOW you’ll be slow and reelect Joe and me
the next chance you get…NO…WAIT !!!

Adam Piper and Mark Plowden were/are NOTORIOUS for leaking information to the press. Would not surprise me if Wilson’s office was the source of leaks throughout this Pascoe ordeal.

Well,here we go..Loftis spreading his shit on the AG. Loftis wants to be governor of SC.. Alan Wilson is blocking his way… Alan Wilson must be removed from the picture… so Loftis will shine in glory… Wilson has a degree… Loftis has a bug control degree and the brain of a roach… Beware. Alan Wilson. Loftis is your enemy.