Dan Johnson – the ethically-challenged solicitor appointed by Wilson after he fired the initial prosecutor on the case, David Pascoe – has refused to take the job.

That’s right … Johnson told Wilson “questions have been raised regarding whether your office has the authority to grant me jurisdiction to prosecute this matter.” 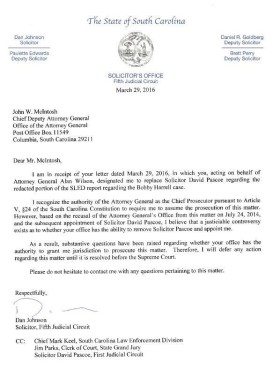 Johnson’s rejection of Wilson was unexpected.

“The man has a moral compass that couldn’t point north if it tried, and even he said this was too shady for him,” one State House insider told us.

So … why did Johnson do it?  (Aside from the reasons stated in his letter, obviously).

According to multiple state lawmakers who spoke extensively with the solicitor in the aftermath of his decision, he viewed Wilson’s decision to remove Pascoe as a “delaying tactic.”

One lawmaker told us Johnson was convinced any inquiry initiated by his office would simply “re-plow the same ground” plowed by Pascoe – an endeavor he told lawmakers he “wanted nothing to do with.”