With his political career on the line – along with the careers of multiple state lawmakers facing likely criminal corruption charges – S.C. attorney general Alan Wilson angrily addressed reporters Wednesday regarding allegations that he has obstructed an ongoing probe into public corruption at the S.C. State House.

Oddly enough, though, Wilson’s press event may have been intended to further this obstructionism by tainting the evidence that’s been collected against multiple sitting lawmakers (many of whom are reportedly in his political orbit – a.k.a. the political stable of neo-Confederate consultant Richard Quinn).

Of interest, Wilson was joined at his press conference by Henry McMaster and Charlie Condon, a pair of former attorneys general who also received their political counsel from Quinn.

To briefly recap the situation: Wilson recused himself from this investigation into legislative corruption last summer – claiming he was “conflicted.”  He never explained his conflicts, however, he simply handed the case off to S.C. first circuit solicitor David Pascoe – who previously presided over the successful prosecution of former S.C. Speaker of the House Bobby Harrell when Wilson recused himself in that case, too.

Wilson didn’t stay “recused” for long in the current case, though …

Last December, his office quietly released an advisory opinion (obtained exclusively by this website) in which he advised Pascoe that several angles of potential prosecution against sitting members of the S.C. General Assembly were unlikely to yield indictments.

That opinion finally drew media attention to the fact that Wilson’s involvement in the ongoing investigation wasn’t exactly on the up-and-up. 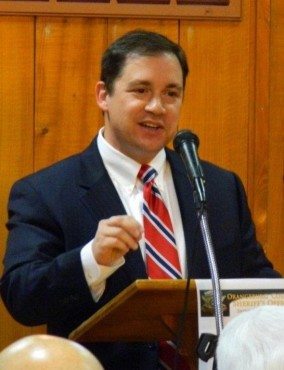 This week, all hell broke loose.  First, it was revealed that Wilson was blocking the empaneling of a grand jury requested by Pascoe and the S.C. State Law Enforcement Division (SLED) – presumably to keep this grand jury from issuing indictments of sitting lawmakers.

When news of Wilson’s obstruction became public – he fired Pascoe.  Next, he attempted to appoint another solicitor to take the case – but that official, S.C. fifth circuit solicitor Dan Johnson, declined to take the case citing the swirling controversy.

Wilson claimed he reentered the case out of a sense of duty.

“I cannot recuse myself from my statutory obligations to administer the state grand jury act,” he said at his press conference.

Wilson then proceeded to refer to Pascoe (repeatedly) as “tainted” – but never explained why.

Which may have been the point …

“Wilson has effectively precluded a prosecution now by calling Pascoe ‘tainted,'” one attorney explained.  “He’s cast doubt on any evidence uncovered.  In essence, he’s knowingly tainted any evidence by calling the prosecutor out.”

Yet to be determined?  Whether Wilson has the power to intervene in this case at all …

“Wilson’s argument that only HE could approve empaneling is specious; e.g., that would necessitate his reviewing the FACTS supporting a statewide Grand Jury, and he recused himself because of an appearance of impropriety in 2014!” the judge added.  “He can’t review and make a decision now!”

Apparently Wilson thinks he can …

Not only that, Wilson had the audacity to continue trying to portray himself as the aggrieved crusader … while lambasting his enemies as “naysayers, haters” and of course “bloggers.”

“I’m not going anywhere,” he said.  “Keep doing what you are doing.  I’ll keep doing the right thing.  You do your worst.  I will do my best.”

Sadly, two years ago Wilson had built a reputation as a crusader for public integrity … standing up to a corrupt judicial branch in an effort to advance the case against Harrell.  But he surrendered his white hat a long time ago … and now his conduct has become so transparently reprehensible, so egregiously corrupt that this website has called on him to resign his office.

Did Wilson’s show of bravado this week do anything to change our mind?

No … and apparently we’re not alone in that assessment.

“He came across like a petulant child,” a source close to the investigation told us, and that was one of the kinder criticisms.

“This is an unmitigated disaster for Alan Wilson,” a senior South Carolina “Republican” official told us.

“This is up there with Howard Dean screaming,” one prominent Democrat agreed.