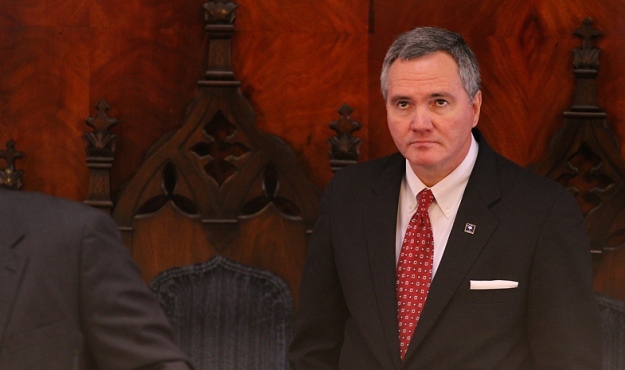 By FITSNEWS || Suspended S.C. Speaker of the House Bobby Harrell – one of the most powerful politicians the Palmetto State has seen in recent memory – will plead guilty to corruption charges and resign his office tomorrow (October 23), sources familiar with his thinking tell FITS.

“It’s time for him for him to move on – to put this behind him,” the source said. “He and his family have been dealing with this for two years.  He’s ready to be done with it and get on with his life.  Whatever the next phase is, he’s ready to get on with that.”

It’s not clear what Harrell’s punishment will be, but it is clear that he will have to give up his office – and withdraw as a candidate in the November 4 election.

Harrell will also be prohibited from seeking office for the duration of his penalty – a punishment reportedly insisted upon by solicitor David Pascoe.

The Lowcountry legislative leader – who has run the S.C. House of Representatives for the last decade – was indicted last month on nine counts of public corruption, prompting the powerful legislative leader to suspend himself from office the following day.

The case was initiated by a complaint from the S.C. Policy Council, a limited government think tank in Columbia, S.C.

“If the reports are accurate that the Speaker intends to resign and plead guilty to some of the charges, then this is a start,” Ashley Landess, president of the S.C. Policy Council told FITS. “Frankly, our expectation is that there is more to come.”

Landess is referring to an ongoing federal-state corruption investigation that was exclusively reported on by FITS last month.

“Our goal was to force the system to work – to hold the most powerful lawmakers in state government accountable,” Landess added. “But the system didn’t work on its own – we had to push it, and force it to work.”

One staunch Harrell ally blasted the case against the Speaker as “selective prosecution.”

Even Harrell enemies – while pleased with his decision to step down – expressed amazement that the powerful Speaker would be brought down on charges that were nowhere near as serious (or at the very lease, were comparable) to the charges leveled against S.C. Gov. Nikki Haley two years ago.

“She lobbied members of the House for her employers – including one paying her under the table,” one House member told FITS.  “He filled out reimbursement forms wrong.  But she stays and he goes?  I don’t get it.”

Obviously we believe Harrell’s crimes amount to much more than simply “filling out reimbursement forms wrong,” but still … there is a credible case to be made for selective prosecution as it relates to the way Harrell and Haley were treated.

For example, the allegations against Haley never saw a public court – instead they were whitewashed by a corrupt committee of her former “Republican” colleagues in the S.C. House of Representatives.

How is that fair?

Again, we’re not saying Harrell didn’t deserve to go down – in fact we called on him to resign last February.

But as we’ve repeatedly pointed out, Haley has done far worse than Harrell – and gotten away with it.

The governor was accused of multiple abuses of power during her six years as a member of the S.C. House of Representatives. Specifically, she was accused of illegally lobbying on behalf of Lexington Medical Center, her former employer from 2008-10. Haley was also accused of illegally lobbying on behalf of Wilbur Smith Associates – an engineering firm with extensive business before the state – and failing to report nearly $50,000 in income received from the company between 2007-09.

In fact FITS has spoken with several lawmakers who said they were willing to sign affidavits attesting to Haley’s illegal lobbying – but were never asked to do so by the S.C. House “Ethics” Committee.

Oh, and in addition to her own ethics issues … Haley (like Harrell) has some issues with political action committees working on her behalf.  Specifically, we’re referring to “The Movement Fund,” a group which has run political ads on her behalf – while paying big bucks to members of the governor’s campaign organization.