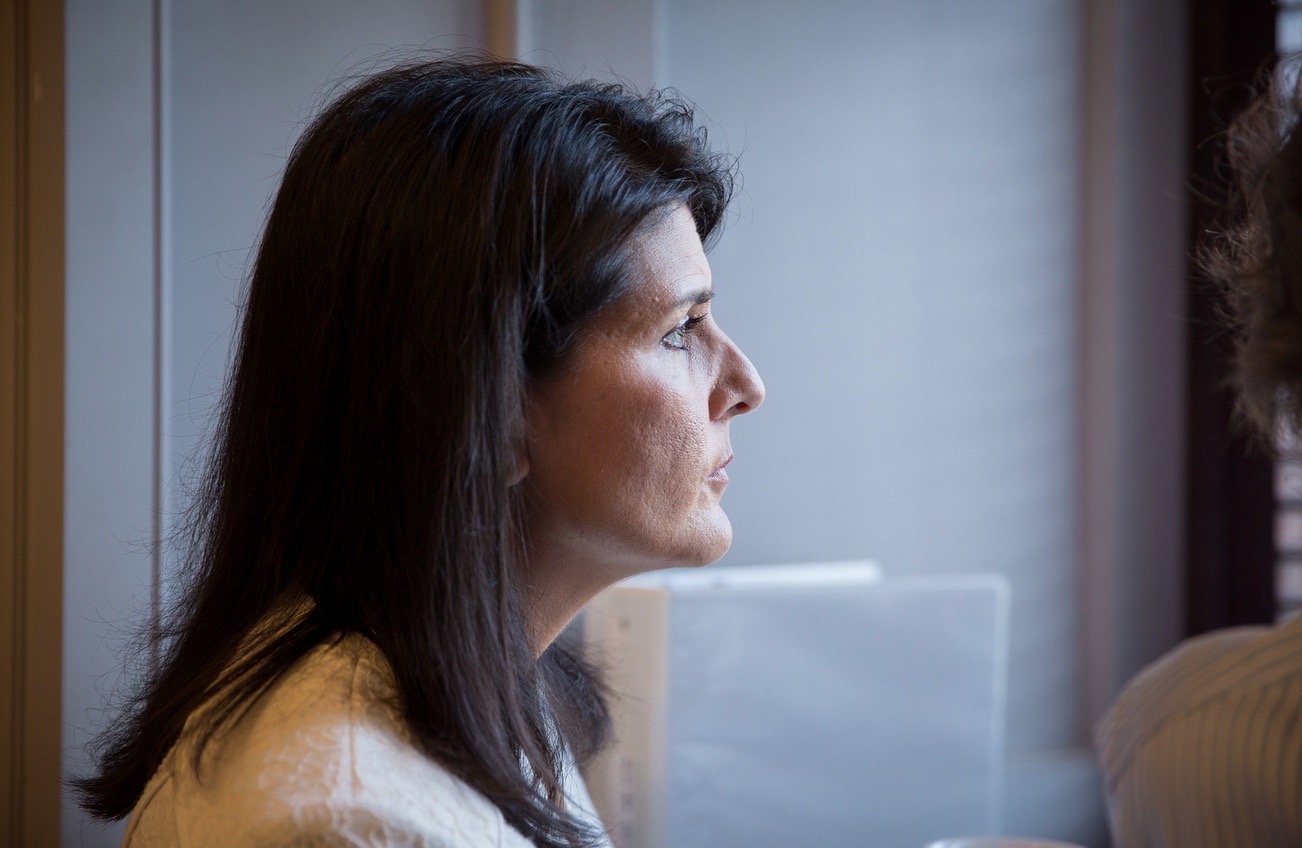 || By FITSNEWS || South Carolina governor Nikki Haley‘s national star is on the rise in the aftermath of one of the most tumultuous months in Palmetto State history.

But to hear her tell it, she’s not focused on that.

A month ago today, the City of Charleston, S.C. was rocked by a horrific, racially motivated shooting at the historic Mother Emanuel AME Church.  The “Holy City Massacre” – perpetrated by 21-year-old white supremacist Dylann Storm Roof – killed nine black churchgoers in their house of worship.

The shooting also led to a caustic debate in the S.C. General Assembly over the removal of the Confederate flag from the grounds of the S.C. State House.

The flag was taken down last week … but the effort to lower it caused a massive rift within Haley’s party.

Haley – a former flag supporter – angered many South Carolina GOP voters with her flip-flop on the flag, but there can be no denying the last four weeks has catapulted the 43-year-old back into the national limelight.

Where the reviews have been universally favorable for her …

Take Haley’s interview last weekend on NBC’s “Meet the Press,” in which she told host Chuck Todd the extra attention on her political aspirations was “painful” for her to think about “because nine people died.”

As the daughter of Indian immigrants in a Republican Party still trying to shed its image as the party of old white men, Haley has been mentioned as a possible vice presidential pick before — but that talk will now get louder and more frequent.

What does Haley think of the chatter?

“It’s not something I can think about,” she told the paper. “I know everybody else wants to talk about it, but there’s still not an hour in the day when I’m not thinking about those nine people.  And so I have to get past that, and I don’t know when that’s going to be.  But right now my focus is on those nine people and how to honor them and how to make sure this means something — and not just temporarily.”

Do we believe Haley?  Is she really not looking national in the aftermath of this tragedy?

It’s hard to believe that, frankly.

Let’s not forget: This is a woman who sold her state down the river for a speaking slot at the 2012 “Republican” National Convention.

Here’s the question, though.  Whether Haley is looking national or not … do the vetting issues which existed before her big moment magically disappear?

In other words, does one well-managed (depending on your perspective) crisis negative the pile of pernicious problems a credible national opposition researcher is likely to dig up on Haley?

For example, does it erase the litany of ethics issues in her background?  Her utter lack of fiscal conservative bona fides? And yes … the sex scandals, too?

Guess we’re about to find out …

For the record, we agreed with Haley on the need to take the flag down.  Of course we didn’t have to wait for BMW, Boeing, Volvo and other corporations to tell us it was the right thing to do.

Still, at this point the national media seems about as likely to delve into Haley’s opportunistic flip-flop as it does to probe S.C. Rep. Jenny Horne‘s infamous “daughter of the Confederacy” claim.

Why not?  It doesn’t fit the narrative …

Boston Bombings: We Told You So

See dummies, if you want to be taken seriously on a national level, you can’t be on the side of racists. Even Nikki knows that.

Unless you’re a Democrat. Obama’s a racist. And look where it landed him.

Oh GrandTango, it landed him in the WhiteHouse…twice…in overwhelming victories. Higher approval ratings than his republican predecessor. Do you just take facts, state the opposite and sit there like you’ve done something witty? And why no more GrandTango handle? If your just going to type the same dumb shit…

What’s he scared of? Looking like a total moron? Way too late for that.
So why no more GT handle? You can even cuss me out in your reply…

You mean the ones who supports killing the Black baby in the womb?..

I want to hear more about how Scott Walker is the best choice for president. lol

Quoting the P&C as the definer of the GOP just makes you look like a fucking idiot.

A majority of the states have Republican leadership. The US House and Senate have moved to GOP majorities because of Obama’s and the Democrats’ failure. And the liberal-centric states are losing population and going bankrupt. Just look at the 2014 election results. Do some homework before posting, Dumbass.

Well, that is a complete load of lies. Look at Colorado and Missouri. Now look at their Republican lead neighbors. Do some homework before posting, Dumbfuck.

Help! We’re suffering! Don’t let the guys that screwed us screw you!

4.4% and 4.6% unemployment. Five elections in four years. The Democrats must really suck.

Kansas has forever been a hot bed of Republican fervor and full blown craziness. The state that lead the way for the 18th Amendment, the state where Brown vs The board of education originated, and, of course, my all time favorite, the Westboro Baptist Church. Not a state to emulate.

If you are GrandTango you would want to emulate that boring ass dump.

the state where Brown vs The board of education originated

South Carolina got cheated. The original of four combined cases was Briggs vs. Elliot in Summerton.

Are you evolving? Prove it

I moved to Colorado from SC. No comparison. You might want to rethink the whole ‘losing population’ thing. Hell, my new neighbors just came from Anderson. We both agree CO is way better than SC (unless you’re a beach person, I guess)

You know that road from Colorado did have a westbound lane right next to the eastbound one that brought you here.

Great, you have a grasp of how two-way roads work. Here, have a medicated cookie.

You said you preferred Colorado. I was just wondering why you were sticking around.

Dude, please stop, you are threatening our IQ mantra of “Thank God for Mississippi.”

Carl said this, “We both agree CO is way better than SC (unless you’re a beach person, I guess).”
If he feels that way then he is free to return. Nothing about my statement threatens what you claim to be SC’s mantra.

Do you have choice in Colorado?

Eight the 10 fastest growing states are governed by Republicans including SC which is 10. The two Democrat states and DC legalized marijuana.
https://en.m.wikipedia.org/wiki/List_of_U.S._states_by_population_growth_rate

Unfortunately, As the people of Illinois and Michigan wake up and think for themselves they are leaving the decaying democratic ruled cities that they live in. That only leaves the mind numbed democrats a bigger majority in that state and shifts the electoral votes in those states to the democrats.

Nikki knows catering to racists will get you nowhere nationally. It’s a sign that the old white conservative is no longer a big enough voting block.

Tell that to Donald Trump

He’s leading a poll of elderly people who still answer their landlines and watch FoxNews. That describes my Mom and Dad and even they think he’s a sad joke. I’d gladly tell that asshole that.

Foxnews is bigger than all major news COMBINED!! Fool!

What about the young white fools of the Democrat party and the abortionist thugs that look like women but act like rats who eat their young in the name of PRO CHOICE? Think democrats…hell is real…

“Of course we didn’t have to wait for BMW, Boeing, Volvo and other corporations to tell us it was the right thing to do.”

Will Folk’s knows better than to say that. When you are changing your possition on an issue, you line up as much support as you can privately then pick the most opportune time to announce it with those supporters backing you up, but you are the lead.

Will knows from experience that Haley made the decision two or more days before her announcement and that she couldn’t of made a better choice of timing to make the announcement that would have given a greater chance of success. In his prior occupation, he knows decisions aren’t announced to the public immediately. What troubles me is not that Will is wrong, but that he knows it and is being dishonest.

Will is dishonest? Say it isn’t so!

Nikki Haley: It’s OK to have the Confederate flag at the statehouse because not “a single CEO” has complained

apparently her “position” is that of “what does Boeing, BMW and Volvo want?”

Don’t you think a lot of people changed their minds after Emanuel AME?

TWSS must never be used unless what preceeds it is viable as a double entendre.

If the vetting process even takes place, which is doubtful, I wonder if the truth about the family business will come out.

Shifty asks: Were did the missing $ 50,000 from the bank loan to the temple for renovations disappear to?

The only scenario under which Haley would get picked for VP would be if Walker is the nominee and she had endorsed him. He could use a Southerner and having a woman and a minority would help. Although she doesn’t bring anything to anyone’s ticket that Gov. Susanna Martinez doesn’t bring. Plus Martinez is from a winnable but Blue state. Martinez is also a lot more popular in her home state. Besides the Hispanic vote is much larger and more important than the Indian-American vote.

A cabinet position is always a possibility, but hopefully Hillary snuffs out that option too.

Hillary is a liar…liar..liar..Oh did I say she was a pathological liar? Her husband was accused of many affairs…denied them..just like Hillary attacked his victims…um..Cosby syndrome? He also was accused of rape..now his rich pal and him are accused with others about young girls being abused..so..whats new with Democrats?? Celebrate democrats!!!..an abortion happened yesterday…proof of your evil ways of politicking and perverted thinking..

That post was 5 months ago. Get a life nut job.

Will, two questions for you. 1- Did you have any regrets about the affair? 2-Is it true that she wanted to leave her husband for you?

1. What affair? 2. A serving member of the military is much more politically valuable than a small time blogger with a CDV conviction.

I knew a girl named Nikki, I guess you could say she was…

She is working, non-stop, on a ticket out of SC. I know Haley and her people and I watch with dismay as she shirks responsibilities here to make hay on the national stage.

It is an old story that never seems to change. Politicians ensuring their futures at the cost of the people they serve.

She needs to address problems in her own administration before they derail her attempts to go to DC.

Republicans wont run her or Jeb they would risk losing the southern states over the flag. Trump/Carson 2016

Bullshit! Her motives are transparent.

She is an ISIS terrorist, her weapon is her mouth and pen against the majority of the citizens of SC.

Check this out Nikki Haley is playing this well had her cameraman and Leroy at the Capitol at the right time…..look into the history of Nikki’s man interesting read how he used this system in Florida..