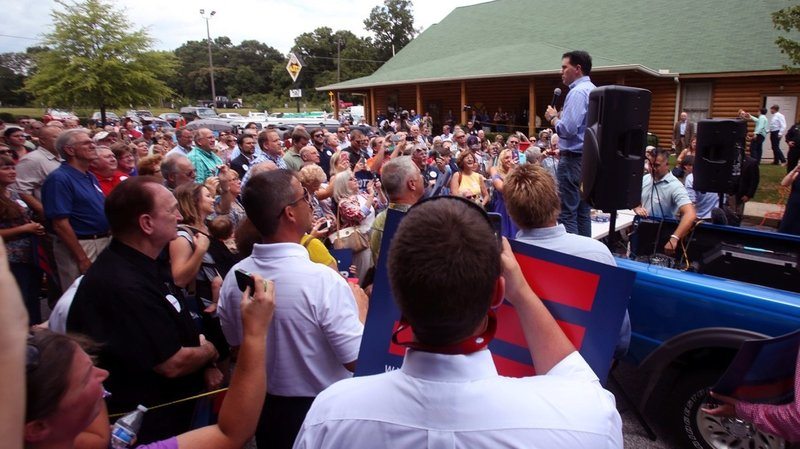 || By FITSNEWS ||  We’re either provided (or forwarded) all of the official emails released by the 2016 presidential campaigns.

These missives usually consist of advisories (i.e. information on candidate appearances), press releases (i.e. statements on issues or controversies), opinion pieces (i.e. columns written by the candidate) or … in some cases … news stories the campaigns want to commend to other reporters’ attention.

For example Wisconsin governor Scott Walker‘s campaign – fresh off of a visit to early-voting South Carolina this week – chose to share this report from NPR’s Jessica Taylor.

With Iowa considered a must-win for Walker, and lesser hopes in moderate New Hampshire, a victory in South Carolina in 2016 could secure Walker’s place atop the GOP field.

The state is looking to reclaim its streak of picking presidential nominees, and Walker could be just the candidate who can bridge its divide – appealing to both conservative and establishment coalitions across the state’s diverse Republican Party as a recipe for a win.

For Walker, he’ll have to use a unique balancing act to win the Palmetto State. Except for the state’s wrong pick in 2012 of former Speaker Newt Gingrich, South Carolina had a perfect streak of picking the eventual GOP nominee since 1980.

Past nominees won by crafting winning coalitions across the state – appealing to the Upstate’s sizable evangelical population while also wooing more “country club Republicans,” military veterans and retirees in the Lowcountry.  That’s how George W. Bush got a win in 2000, securing his place. The foe he defeated, Arizona Sen. John McCain, was able to bridge the divides and win in 2008, though.

Can Walker pull off a similar Palmetto coalition?

In fact we’re of the opinion Walker is the best-positioned of any “Republican” candidate to win in South Carolina.

Whether that’s a good thing or not remains to be seen, but we’ll be elaborating on Walker’s “First in the South” upside in future posts …

When Walker hired Kerry Wood he assured he would have problems.

That crook can’t be honest and the email fundraising shows it. Too many “insiders” know about Kerry and several “brand name” politicians that would have endorsed Walker by now WILL NEVER endorse him as long as Kerry Woods works for him.

Trump benefits from the sleaze Walker has hired.

I did not know Kerry was working for Scott Walker. That does it for me. Walker should have never hired him because of the abuse he heaped on his wife

Kerry Wood DOES NOT work for Scott Walker.

Kerry Wood gets paid by Walker’s campaign. So maybe he works WITH Scott, then.

On one of the click-bait ads over to the right of the page, there’s one about gay celebrities we supposedly had no idea about. With a pic of Jody Foster. Seriously? Who had no idea about her sexuality? Somebody who has lived with wolves for the last two decades?

Also, they airbrushed out the “accidentally” flashed underboobage on one of those “perfectly timed photos” stories. I guess they thought it was a spoiler or something.

Lastly, I’m pissed that they are showing the shot of Christina Aguilera when she had put a little weight on, and dropped her rag while singing. Unfair. But only because I adore her.

Those ads are geared to a specific intelligence level, prone to respond. I often wondered who is stupid enough to get drawn in by them.
Thanks for answering my question.

So, FitsNews is geared towards stupid people. Makes sense now…

You mistake idle comment on a feature of a page to getting “drawn in” to that feature. Or at least, you pretend to do that. Are you twice as dense as the fog in a vintage Sherlock Holmes film, or willfully disingenuous in how you fulfill your incessant drive to “one-up” somebody, fake-named shithead troll?

He sure as Hell was smart enough to outsmart those corrupt unions in Wisc. Then he kicked the asses of the Democrats who SWORE vengeance.
He can look however he wants, as long as he keeps kicking in your fucking teeth. (:

He’s so dumb looking, though. It’s like someone commissioned an cartoonist to draw a really dense twat. So, I can see why you love the guy so much.

I love he slapped the shit out of your stupid ass. You ignorant fuck.

How did he slap anything of mine? I don’t live in Wisconsin, GT.

Why don’t you use the GrandTango handle anymore? Get kicked off of Disqus?

Not exactly. Same kind of bugfuck thinking, but two distinctly different individuals. pogo adores GT as a like-minded “genius”, though, and has imprinted on him like a motherless baby duck does on the first thing it sees that moves. Tries to ape his syntax and general posting style. Doesn’t quite get it right. I’ve been getting trolled have given the motherfuckers as good as they give since I first posted on UseNet in ’96 and YahooGroups a couple of years later. I can smell the “tells” that differentiate these miscreants a mile away.

Trump is kicking Walkers ass in the polls. That little Kochsucker will never be President.

Like most South Carolinians, Walker never completed college and only worked a part-time job before living off the government.

How well did that Stupid Bullshit work for you, when you swore you’d defeat Walker in Wisc.? (: You fucking idiot.

I don’t give a shit about Wisconsin. And neither does Scott.

You’re a Democrat. You don’t give a shit about anything, except forcing us to give your lazy, miserable ass a hand-out.
You’re the reason the GOP is sitting in such good position.

I’m not a democrat, but even I know the Republican Party is not in a good position. 19 candidates means there is no leader or clear plan. Just a bunch of clowns trying to rake in some PAC money. That’s it.

If Trump was truly as rich and a mover and shaker he claims to be, he wouldn’t be running for office. He would own politicians and control things behind the scenes. He’s a fraud and attention whore.

You mean like the Koch brothers own Walker and control him behind the scenes?

It is not axiomatic that a candidate must have a background of involvement with offshore pubahs and potentates.

“Mr. Candidate, what part of the Constitution do you want to change?”

What would Hillary say?

What would Bern-it Sanders say?

What exactly would The Donald say?

GT says Walker is a winner. We all know what that means. He is going for the record of worst prognosticator in history.