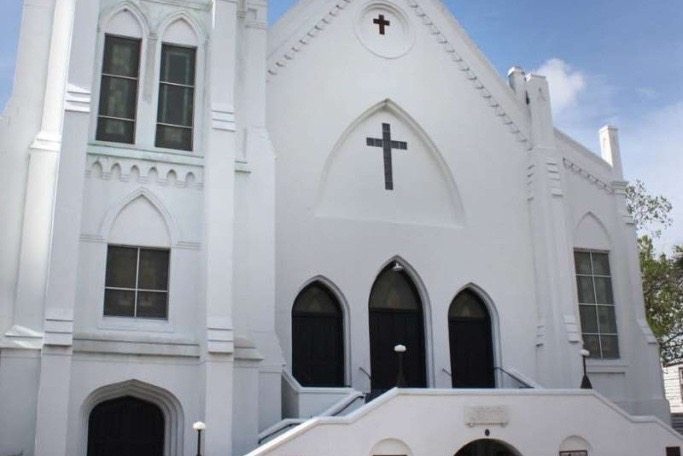 || By FITSNEWS || Local, state and federal law enforcement agencies continued their search Thursday for the perpetrator of one of the deadliest church shootings in American history.

The massacre at Mother Emanuel AME Church in historic Charleston, S.C. is the deadliest mass shooting on American soil since the September 2013 Navy Yard slayings.  Nine people – including S.C. Senator Clementa Pinckney and his sister – were among the dead.

Three people survived the attack … which was said to have been perpetrated by this as-yet-unidentified individual.  One of the survivors was reportedly spared by the shooter in the hopes she would share the horrific details of the massacre.

UPDATE: Suspect has been identified as 21-year-old Dylann Storm Roof of Columbia, S.C.

According to police, the gunman entered the church at around 8:00 p.m. EDT and sat with Pinckney and his fellow parishioners – who were participating in a Bible study/ prayer meeting.

NBC News interviewed Sylvia Johnson – a relative of Pinckney who spoke with one of the survivors.

“I have to do it,” the gunman is said to have told his victims as he reloaded his weapon. “You rape our women and you’re taking over our country.  And you have to go.”

Johnson says the shooter – who appeared to be wearing body armor under his sweatshirt – asked for Pinckney by name and sat next to him during the Bible study prior to launching his deadly attack.  That’s clear premeditation – and assuming evidence conclusively links this suspect to the slayings, it’s more evidence of the need for the death penalty to be sought in this case.

A massive manhunt late Wednesday and early Thursday failed to result in the apprehension of the suspect, although police believe he is still in the Charleston, S.C. area after fleeing the scene in a late 1990s/ early 2000s model Hyundai Elantra

Mullen’s agency – along with Charleston County Sheriff’s deputies, the S.C. State Law Enforcement Division (SLED) and the Federal Bureau of Investigation (FBI) – is investigating the crime.

Meanwhile, civil rights activist Al Sharpton was en route to Charleston, S.C. – the second time this year he’s been to the Palmetto State’s Lowcountry in response to a race related shooting.

As tensions mounted, elected officials across South Carolina recoiled at the tragedy.

“These brutal murders are the rare kind of horror that shakes at our very core,” U.S. Rep. Jeff Duncan said in a statement. “I ask that you join me in praying for Charleston. Our brothers and sisters in Christ taken from us last night clearly believed in the power of prayer. They were praying and so should we. We are all children of God.”

Mother Emanuel is one of the oldest black congregations in the southern United States.  Organized in 1816, one of the church’s former houses of worship was burned to the ground during a pre-Civil War controversy over a slave revolt.  For decades, it was banned – along with all other black churches in the Palmetto State.  More recently, during the turbulent 1960s, it hosted civil rights events featuring Martin Luther King, Jr.