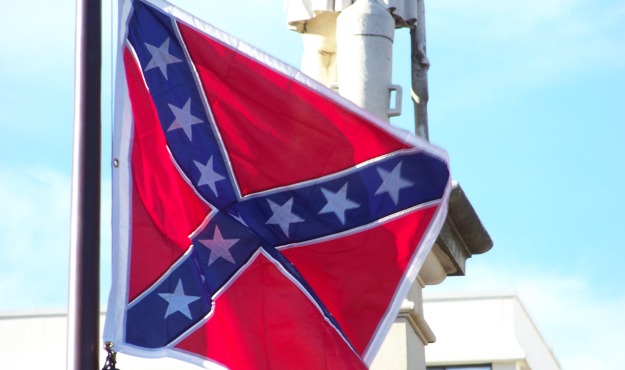 || By FITSNEWS || The U.S. Department of Justice (USDOJ) is blaming “budget cuts” for its decision to bail on a $106 million deal with the University of South Carolina … but sources tell FITS something else drove the government to scuttle the deal.

What was it?  According to multiple sources familiar with the failed deal it was the Confederate flag … which was removed from the S.C. State House dome in 2000 and placed on the north lawn of the capital grounds (a compromise that has pleased no one).

“Please, please, please don’t tell me you are going to write that,” a University official pleaded with FITS.

Asked if the report about the flag was untrue, the official refused to confirm or deny – but later stated the identification of the “true culprit” would have “a chilling effect on future public and private economic development.”

Asked if the “true culprit” was the Confederate flag, the source demurred.

“You push that out there and it’s bad for you, for me, for your kids, my kids … everybody,” she said.

In July of 2009, the USDOJ agreed to lease the building from the school for twenty years – a deal hailed by officials as “one of the most significant developments for the University of South Carolina in decades.”

Officials added that the deal would “bring more than 250 high-paying jobs to Columbia and allow the university to construct a new building for the Darla Moore School of Business.”

Well, USC built that new business school – at a cost of $106.5 million – but the money that was supposed to pay for it has now vanished.  Along with the promised jobs. 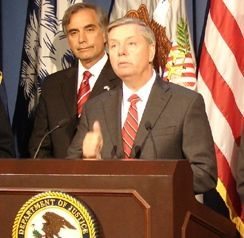 Hailed as the architect of this now-defunct deal?  U.S. Senator Lindsey Graham.

“Thanks to his dedication to our state and all our citizens, the University of South Carolina and the Midlands will experience the sweeping economic and intellectual benefits of this announcement,” USC president Harris Pastides said at the time.

“It’s a HUGE blow to Columbia,” one source told us of the USDOJ decision.

According to The (Columbia, S.C.) State newspaper – ever the apologist for government institutions in the Palmetto State – the deal died because of budget cuts caused by the 2011 “debt dereliction deal” reached by the U.S. Congress.

That’s laughable in light of the $4 trillion budget released by U.S. president Barack Obama this week – and the fact the USDOJ’s move to the USC building was a cash-saving measure to begin with.

In fact the federal government claimed its occupancy of the Close-Hipp building would save taxpayers $42 million over the twenty-year life of the contract.

“It is a wise collaboration that will save the taxpayers money,” Graham said at the time. “I wish we saw more visionary collaborations like this one between the federal government and outside institutions.”

“Off the dome and in your face,” supporters of the banner used to say.

This website hasn’t taken a position on the issue because we believe symbols like the Confederate flag – or any other flag – are utterly meaningless.

We feel the same today … although we suspect the pressure on lawmakers to reconsider the 2000 compromise will ratchet up in light of these developments.