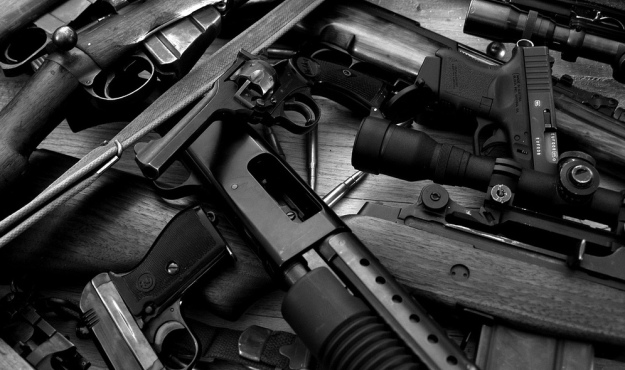 By FITSNEWS  ||  We deal in data on this site. Hard data.  In fact the harder the better, in our opinion.

Numbers help us make sense of the world.  They help us cut through the clutter of conflicting opinions to arrive at the essence of what it is we’re discussing – whether it’s economic policy, education policy or the ongoing debate over “gun control.”

Frankly, we don’t believe there should even be a”gun control” debate in the United States.  Private citizens’ right to keep and bear arms is guaranteed by the Second Amendment to the U.S. Constitution – which is why this website has consistently argued for the civil disobedience of any law to the contrary.

The debate is (or should be) over before it even begins …

For the sake of argument, though, does the increasing prevalence of firearms in America make our citizens more or less safe?

Let’s look at the numbers …

According to the Federal Bureau of Investigation (FBI)’s annual crime report, the estimated number of violent crimes in America decreased by 4.4 percent in 2013 when compared with 2012 data.  Murder, rape, robbery and aggravated assault – all down.  Also, property crimes declined by 4.1 percent from the previous year.

What makes these numbers interesting?  They occurred against a backdrop of soaring gun ownership.  A whopping 21,093,273 background checks for firearm purchases were conducted through the National Instant Criminal Background Check System (NICS) in 2013 – far outpacing the 14,033,824 checks conducted in 2009.

And remember – the population of the United States expanded from 259.9 million to 315.5 million over this period.

Spot the trend?  If not, please refer to the headline of this article.

“Spread The Wealth Around” Fail

Correlation is not causation. I’m pro-gun, but I highly doubt the most gun heavy areas had high crime rates before their owners went out and bought more guns.

In 2012, the share of American households with guns was 34 percent, according to survey results released on Thursday. Researchers said the difference compared with 2010, when the rate was 32 percent, was not statistically significant.” Your analysis is flawed because fewer households have guns…individual gun owners own more guns hell you could say this is the reason that crime is down…”Milk consumption per capita has been on steady march downward, dropping 25% from 1975 to 2012, according to the U.S. Department of Agriculture. Meanwhile, the mainstreaming of plant-based dairy alternatives like soy, almond, and rice milk has averaged annual sales growth of 10.9% since 1999 in the U.S., according to market research firm Euromonitor.”

“We deal in data on this site. Hard data. In fact the harder the better, in our opinion.”

That statement may be the biggest pile of bullshit you have ever posted on your blog/propaganda sheet.

All of the other “rent an opinion” pieces that you litter this site with?

We all may be suckers or craning our necks at wrecks, but most of us are not fools, FITS.

Sorry, I was on a long, dull conference call and got a little silly…

Watching “The Wire”, I thought they all have TracPhones.

Flawed premise – according to Homeland Security most of the illegal aliens “non-documented workers” are not Mexicans.

The numbers can’t lie. It must be true.

To truly understand the impact internet scams have had on reducing the murder rate, we’d have to be looking at Nigeria’s murder rate.

Are you saying that Ebola IS a g’ment plot?

… Thats why the banks are the biggest employers of convicted felons … ’cause that’s where the money is.

In 1995, the South Carolina football team won the Carquest bowl. In 2005, they lost the Independence bowl.

I like these posts, Jackie Chiles, and I am chuckling with you. How about this one? I weighed about 150 lbs in 1994 and now I weigh over 200 lbs. THEREFORE, MY FAT ASS PREVENTS MURDERS. ERGO, I AM A NATIONAL HERO!!!! Now those are some “hard” facts for you, Fitzy!

In 2000, Jackie Chiles offered no comments to FITS threads.

In 2014–substantially more. Therefore, Jackie Chiles is single-handedly preventing murders through his comments.

Flawed premise – Fits wasn’t around in 2000 (not that that’d stop Will from touting your premise as fact….)

Where is the correlation? The article literally looked at raw numbers and drew a connection when there was no study tying the two together. Your claiming there is a correlation is exactly as provable as my claims as I used the same methodology as zerohedge and fits did. I’d mock you for not understanding this, but it’s useless to waste a good mocking on someone without the intelligence to comprehend it.

Well yes, of course. Interestingly enough, the price of ammo has dropped dramatically in the last 3-6 months as President Obama has become less and less relevant. http://www.thetruthaboutguns.com/2014/06/dean-weingarten/coming-crash-ammunition-prices/

I think we should all be armed and loaded. When the shooting begains, we will benefit from a smaller population. This means more goods, services, gas, and jobs for those not dead.

LMAO!!! You are on a roll today. Gun sales are going thru the roof in the Ferguson, MO area prior to the decision of the grand jury on the police officer that eliminated that POS, the ‘gentle giant’.

You may be onto something. :-)

Okay enough humor (such as it was) – there is a correlation between ownership and crime as there is a relationship between permitting and crime. The relationship is easy – if you’re likely to get your ass shot off trying to commit a crime you have second thoughts. The average sociopath will still commit a crime but the non-sociopath criminal will go steal a car or break into a house instead.

In reading the entire report and several other analyses of that report, it seems the consensus among experts attributes the decline to other factors — “including the United States having the highest rate of imprisonment in the world…an aging population and improved police tactics also played a role, along with the increased use of security cameras and the pervasive use of phones to take videos.” Funny, but no other reporting seems to credit the pervasiveness of guns. Wishful thinking, Sic?

Mmmmm … number of guns doubles, violent crime is cut by half … There might be a connection.

More LEGAL guns = Less crime. There are thousands of guns in Chicago or Detroit, they just aren’t possessed by good, law abiding people.

Don’t forget that there have been fewer highway deaths since the budget decimation of the SCHP. Does this mean that Patrolmen are a major cause of highway deaths? (See comment on Volvos). Hard facts.

There is a theory or perhaps a doctrine in the metaphysical community which generally holds that the more you try to control something (anything), the worse it will become. There seems to be something to that, at least in some cases, perhaps more than we realize.

The War On Drugs

The War On Poverty

The War On Terrorism

Anyone else have something to contribute to the list?