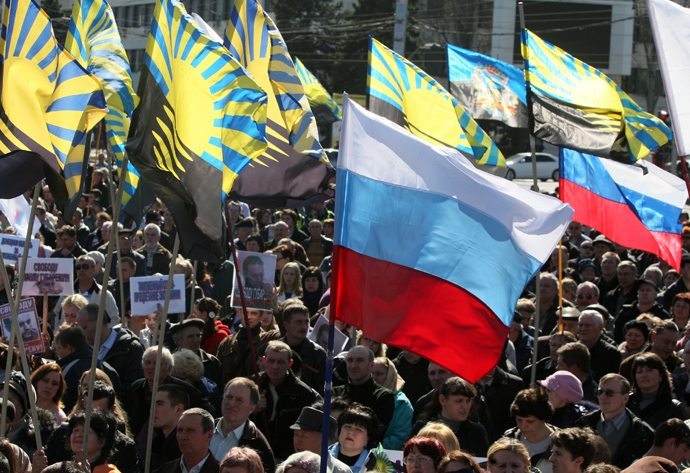 || By FITSNEWS || We just wrote about how the war propaganda was working in America … and unfortunately there’s fresh evidence of that from the Pew Center.

According to the research outfit’s latest data, 41 percent of Americans now support the federal government (a.k.a. the United States) arming Ukraine in its fight against separatist rebels.  A majority of Americans – fifty-three percent- still oppose intervention, but a year ago the spread against arming Ukrainian troops stood at a whopping 62-30 percent.

So things are moving in the wrong direction … or the right direction, if your objective is (as America’s seems to be) provoking a new Cold War with Russia.

As Ron Paul noted in his column this week, America is responsible for overthrowing the constitutionally elected government of Ukraine.  Wait – doesn’t that contradict the whole “making the world safe for democracy” thing?  Yes … but we’re ‘Murica.  And we can, um, afford it.   Or something.

“Policing the world (or attempting to) is one of the reasons current and future generations of American taxpayers are staring down a $17 trillion debt,” we wrote early on in this drama. “We cannot afford to get involved – but even if we could, there is simply no compelling national interest to justify such involvement.”

We feel the same now … even if the rest of the country seems to be moving in the direction of U.S. Senator Lindsey Graham‘s “invade everybody” territory.

Anyway, Pew’s research was conducted among 1,504 American adults between February 18-22.  Its margin of error is plus or minus 2.9 percentage points.

Russia’s citizens?  Here’s what they think …

Another Terror Attack In London

I prefer something a little more mellow:

Lt. Colonel Kilgore in Apocalypse Now (1979). His line “I love the smell of napalm in the morning” from Apocalypse Now is regarded as iconic in cinema history. The full text is as follows:

“You smell that? Do you smell that? Napalm, son. Nothing else in the world smells like that. I love the smell of napalm in the morning. You know, one time we had a hill bombed, for twelve hours. When it was all over I walked up. We didn’t find one of ’em, not one stinkin’ dink body. But the smell! You know – that gasoline smell… the whole hill! Smelled like… victory. (Pause) Some day this war is going to end…”

“separatist rebels”, really…maybe next time you can use “workplace violence”…wasn’t “propaganda” mentioned on this site not too long ago?

“Vladimir Putin – who is now viewed unfavorably by 70 percent of Americans.
Great … here we go again.”
So, does this mean that you have a favorable opinion of Putin. It wouldn’t surprise me. You’ve gloated about his crony deals with China.

Yeah FITS you tell em……if it were not for the propaganda war, the world would be so peaceful. Jihad, the baby-killing and the be-headings would stop, and we could sit around the cauldron w/ RonPaul, Jimmy Cater, Obama, Chamberlain and FITS singing “We Are The World”…

When F*#k ups like FITS are PROVEN to be Dumb@$$ Dolts, is when they double-down on ignorance…hoping no one sees how F*#king Stupid they look…