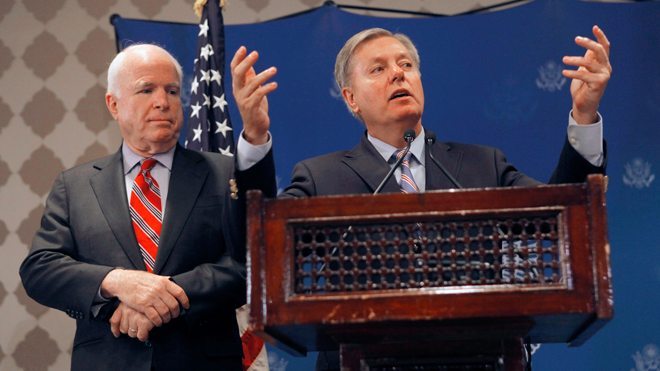 EXPLODE AND MAKE UP?

|| By FITSNEWS || Another week, another national media outlet challenging the efficacy of U.S. Senator Lindsey Graham‘s “bomb everybody” foreign policy.

“Is Lindsey Graham really an adult on foreign policy?  Or an erratic child?” Antle’s headline blares.  Then he’s off and running on a nice, concise recapitulation of some of Graham’s most bizarre insta-reversals on the subject.

You know … like when the wanna-be prez-o-dent said “Iran with a nuclear capability is the greatest threat the world will know in my lifetime” not long after telling the administration of Barack Obama that “the Iranians can provide some assets” in the fight to protect the Middle East from the Islamic State in Iraq and Syria (ISIS).

“We need to coordinate with the Iranians,” Graham said.

Of course Graham is the same guy who has argued both sides of the coin in Syria … so it shouldn’t be surprising when he flips it to suit his purposes, never hesitating to commit the blood and treasure of our nation on a whim.

“Sometimes it’s hard to avoid the conclusion that Graham just wants to use military force in the region, with the details to be worked out later,” Antle wrote.

Exactly … that’s it exactly.  And that’s also exactly why our government’s defense budgets are spiraling out of control at a time when fiscal sanity is desperately needed.

Antle added that while ISIS is indeed a “grotesque” enemy … “there is something indiscriminate about the way a leading Republican, considered one of the party’s adults on national security, approaches our enemies, the world and the use of military force.”

ISIS is clearly bad news … but Antle is correct.  We cannot counter this new threat with mindless, indiscriminate interventionism.  Otherwise we’ll wind up spending another $6 trillion (and losing thousands of additional American lives) on another undeclared war that doesn’t make our country safer.

Graham’s fiscal liberalism, hatred of liberty and personal hypocrisy are one thing (well, three things) … and ample reason to reject his candidacy.  But it is his incessant, unfocused and inconsistent warmongering that make him truly dangerous.

Global Warming is EXPOSED (again) as a major lie and Obama is decrying ‘too much media’ that does not have a common (liberal) point of view..

And a non-factor senator, one of 100…is THE problem…

Another One for the “GrandTango is Crazy” File

LMAO…you decided to surface, after being a coward all weekend…

Answer my questions…Are you a big supporter of Lo Ward?…

And is Hillary, your goddess, ideal candidate, going to be the next president???

HaHa, you spent your time on here all weekend? That is so sad and pathetic. You r worse off than imagined. No cowardice, I actually have a life. You actually want people to respond to you when you were too big a pussy to allow others to comment on your “blog.” A little hypocritical, don’t you think? My answer to both your questions is go fuck yourself. That is my stand, that is what I feel.

So if posters on her have no life…what the F*#k are you doing on here now???….LMAO…
Not to mention you toke FITS’ D!*k regularly as the god to blogs…now you’re calling any readers “pathetic?” …Dumb@$$…. (:

Sort of a limp wristed attemp to dodge after a strong landing punch by Saluda – the Barraccuda.

You’re still SWEARING – like the most ignorant F*#k on earth…Obama is doing a good job…while it’s crashing around you…
How F*#king stupid is that? …LMAO…

What scares you the most, Tango: sorority or getting a job?

No, you’re good. He’s scared of sororities, too. He’s Painfully Awkward Rob Lowe: “I hope it’s not a girl…or a guy.”

And you support Ward, right? …
Point is a majority of Gamecock fans want his @$$ gone. You have your Head up your @$$…and you are going against Gamecock fans…
And what about Hillary????..She is your CAN’T MISS candidate right?…you’re telling me you have your lips firmly on her @$$…and she’s going all the way to the White House…to pick up on the great job you tell us Obama is doing RIGHT???…
It’s your turn to Blog. You show us how to SUCCEED…since you know…
Pro- Lo and Pro-Hillary…We’ll wait and see how your projections turn out???

LIke you ran from the other thread after I kicked your behind? What’s wrong – you running away?

And you still believe in Global Warming and 5.7% unemployment, too, right?…LMAO…
Flat Earth much…Hahahahaha…

You may feel “male” on the inside, but nobody’s seen any balls…

Au Contraire…Liberalism, especially on a Liberal @$$-kissing site like this, is the Gutless stance…You have a cheer-leading section so far up your @$$…you look two-headed…LMAO…

Not to mention, don’t most of you go cross-gender because of your femininity????….Jerry Sandusky is one of yours, and he obviously went both ways, in addition to being a homosexual child molestor…and you march in the streets to empower him…

Republican pedo…that makes him one of yours, Sweet Pea.

Typical liberal. Run from what you are…and try to accuse those doing your bidding as not being like you…

Right, Sweet Pea…keep up the crazy because we love that shit. In fact, you should charge Will for the entertainment you provide.

Come back to the other thread and let me finish kicking your @ss.

All you have to know about Graham’s foreign policy is that “bombing is good”. Which is why him and sing-song master McCain are buddies.

Speaking of McCain, looks like he’s admiring Ms. Lindsey’s guns to me.

Maybe, Mccain, is examining a part of Nancyboys’ anatomy.

Yep! That pretty well sums up Miss Lindsey, who the fucktard voters of SC saw fit to entrust as our Senator for another six LONG years.

Don’t blame me. I voted Demo-crap

the US should not be the world police and get involved in every issue. unless someone else (merkel) takes the lead, then we should take an opposite view and jump in front.

Wait, what, did he claim to be straight again?

He’s trying to build a smart bomb that only kills women and children.Know what I’m sayin’?

Great quotes today from the comments of Not So Brightbart –
“The destruction of morals, and values continues from the seat of our courts. The people who are in charge of protecting our values, are now destroying them.” – re Gay Marriage Alabama
“Here is some ”feedback” for you, obama…..resign and allow America to recover from your ”fundamental transformation.” – re Immigration
“My baloney has a first name, it’s B-A-R-A-K,
My baloney has a second name, it’s O-B-A-M-A!
Oh, I’d like to chuck him in the trash and if you ask me, “Why?”, I’ll saaaaaaayyyy….
‘Cause Barak Obama has a way of messing up the USA!” – Common Core (actually as you notice line three doesn’t work correctly – author needs to return to school for some Common Core)
The Tea Party at its best.

Sometimes, Graham’s four brain cells become disconnected from each other, and he drifts from mostly incoherent to totally incoherent.

How many times do you have to be told to cease messing up Sic Willie’s little stories with facts?

You are screwing up the tin-foil hat narrative with your pesky facts.

The military-industrial complex, the NSA, and the IRS will all be at your house. Tonight!

Just because the defense spending numbers are down, it doesn’t mean they should be anywhere close to where they are now. If Graham had his way, we would have troops in every country, all with their own jet, and gold-plated tight-fitted underwear.

…and all our enemies would flee before them.

NBC liberal god, Brian Williams is a Clinton-Obama level liar. Rosie has melted down at ‘The View’ and a top lefwing Hollywood exec at Sony gets busted and demoted for Racism…

No wonder you liberals live in a Myth-Land. When REALITY S#!t$ all over you…you just bury your head deeper up your @$$#$….LMAO…

If anyone had been listening to McCain and his trained monkey Graham we would have invaded Egypt to help the Islamic Brotherhood instead of the military, we would have invaded Syria and fought in the side if ISSIS. Looks like the “shoot something at somebody” mentality of these two isn’t getting any better. Thanks SC you had six better alternatives to Graham and still he made it. Better luck next time.

Our Nancyboy is a flunky for the Zionists Jews who control America through our politicians, Hollywood & the various news media. A day does not pass that Lindsay does not wake up thinking, ” what can I do for the so-called State of Israel.” Never is there any mention of the hundreds of nuclear weapons in the hands of these psychopaths in the, “Holy Land.”