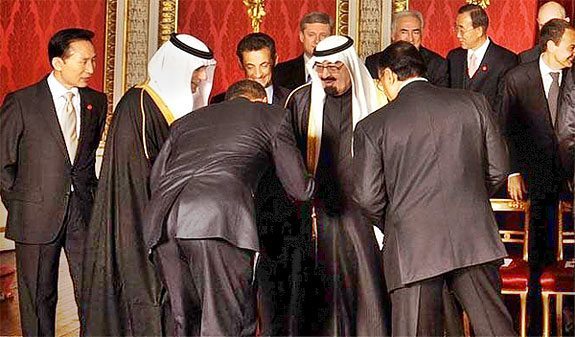 By FITSNews  ||  More than any other nation (save our own) Saudi Arabia bears responsibility for the attacks perpetrated against the United States on September 11, 2001.  This truth would be common knowledge, too, were it not for the American government’s ongoing efforts to conceal it.

Saudi Arabia was also the nation pushing America toward war with Syria in 2013 … unsuccessfully.

Well guess what … America’s new war against the Islamic State in Iraq and Syria (ISIS) has been launched with Saudi Arabian blessing,

According to The Wall Street Journal , though, that blessing “took months of behind-the-scenes work by the U.S. and Arab leaders, who agreed on the need to cooperate against Islamic State, but not how or when.”

Those negotiations “gave the Saudis leverage to extract a fresh U.S. commitment to beef up training for rebels fighting (Syrian president) Bashar al-Assad, whose demise the Saudis still see as a top priority.”

So in addition to attacking ISIS in Syria, America is now going to be attacking Assad  in Syria … or at the very least training his enemies (who oh by the way have agreed not to attack ISIS).

Last fall, Saudi Arabia signaled its intention to shift its allegiance away from the United States … which former U.S. Rep. Ron Paul argued was a good thing.

“Why does Saudi Arabia insist that the United States fight its battles?” Paul wrote. “The Saudis are strongly opposed to the governments in Syria and Iran so they expect the U.S. to attack. It is their neighborhood, why don’t they fight their own wars?”

“If Saudi Arabia wants to pull back from its deep and unhealthy relationship with the United States we should welcome such a move,” Paul wrote.  “Then we might return to peace and commerce rather than sink under entangling alliances.”

Sadly, the Obama administration has pushed us in precisely the opposite direction …

Where Are All The Hurricanes?

The non starter in this article is when the name Ron Paul appears.

That’s exactly how I feel about any comments titled “CNSYD”.

So, the Lil’ Pissant does have a bony ass! Which, by the way, he is pointing it at US citizens….

—- and wearing his pimp suit

In exchange for oil payments only being accepted in US dollars we promised the Kingdom of Saudi Arabia weapons and protection. Since the petrodollar is one of the things keeping us from a total monetary collapse it might not be a bad thing to keep them somewhat happy.

Total monetary collapse might make things better once we are through it.

Let’s not forget that Dick Cheney (then Sec’y of Defense) promised Saudi Arabia that US troops would depart Saudi Arabia as soon as Gulf War 1 was over. In fact, that promise was a required condition precedent to even allow the US to stage prior to liberating Kuwait.

Obama IS a Muslim. Why should anybody be surprised he supports the Muslim brotherhood? The attacks on ISIS are only because of the midterm elections. He has promised Saudi Arabia that Assad will go.

Muslim Obama never let Christianity or Jesus Christ cross his lips at the UN yesterday. He praised Islam for an hour while condemning this country.

Muslim Obama will openly practice his Muslim faith after leaving the white House.

Beat me to it!

Doesn’t matter which president, they all kiss Saudi ass anyways.

… and as a “virgin”, foreign born, infidel turned Muslim, He is quickly learning who His (and our) friends really are in the Muslim world = Almost None!

And He is learning just how selfish and self serving our supposed allies can be, spouting publicly how they are out friends while in the back-rooms they connive (con knife?) to steal as much power and gain as they possibly can for themselves … Oh, wait, that sounds too much like the political animals we have here at home.

“Obama IS a Muslim”
You’re a fucking idiot.

Do you have any teeth?

“More than any other nation, Saudi Arabia bears responsibility for the attacks against the United States on September 11, 2001.”
——–
I thought Ron Paul blamed the US government for 9/11.

So, I guess he should walk around holding hands and kissing like Bush Jr. did while he would make a visit?

Kissing and holding hands is VERY common in SWA/middle east – if you can’t tell what your visitor had for lunch you aren’t standing close enough for local customs. Bush senior and the Saud family were very close so the hole hand holding and greeting kiss thing would be expected. Those things are generally done among equals.
What is unusual is bowing to an equal. but don’t let your cultural illiteracy get in the way of your rant.

Also, be careful how you beckon someone to come closer when in SE Asia.

Yeah, like saluting our US Marine Guard with head bowed and a styrofoam cup in his hand. But I don’t know if that is his spit cup or pee cup – no difference I guess.

Yeah, that’s definitely not worse than saluting with your fricken dog in your hand like GWB…

Yeap. And the first jets outta the country on 9/12/2001 were the LA wing of the Saudi Family on their personal AirBuses, thanks to “W”. (This was a good thing, but shows how close they were and are.)

And wasn’t that BHO who bowed to the Saudi’s? (I don’t remember seeing “W” do that.)

Lindsey Graham is not a muslim. But he is a piece of shit.

At least he didn’t kiss him. That’s the GOP thing to do.