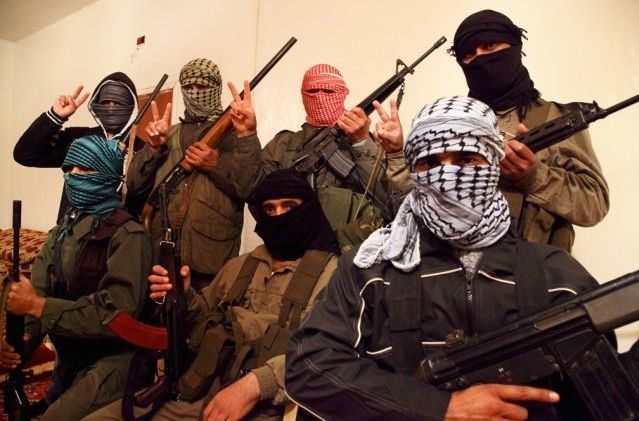 So … just in time to rescue an unpopular Congress (and plummeting cable news ratings), Amerika’s political/ military/ industrial/ media complex has convinced an overworked and undereducated public looking for an enemy/ distraction that the Islamic State of Iraq and Syria (ISIS) is literally at their doorstep.  And that unless the U.S. military strikes now, we will see “an American city in flames.”

Those paying attention (all five of us) know the argument is 100 percent bullsh*t.  Our government just spent $6 trillion (and counting) and lost thousands of lives conducting a “War on Terror” that was supposed to protect us from the “evil doers.”

And now we come to find out the evil doers are stronger than ever?  And we need to launch another war?

Are the American people really this stupid?

One of U.S. President Barack Obama‘s key strategies for destroying ISIS involves arming and training rebels in Syria to fight them (which is funny because six months ago Obama’s administration – and certain “Republican” Senators – were telling Congress that ISIS was a moderate group that we should be providing with money and weapons).

Anyway, chief among the “rebels” we are supposed to be allying with is the Free Syrian Army – which Obama and his GOP warmongers told Congress last week would be America’s “proxy” on the ground.

Our “proxy” just signed a non-aggression deal with … wait for it … ISIS.  According to Agence France, the Free Syrian Army and ISIS have agreed to “respect a truce until a final solution is found and they promise not to attack each other because they consider the principal enemy to be the Nussayri regime.”

Nussayri is a derogatory, pejorative term for the sect of Shiite Islam to which Syrian president Bashar al-Assad belongs.

Like Germany and Great Britain, the Syrian rebels apparently want nothing to do with America’s latest “War on Terror.”

How important is the Free Syrian Army to Obama’s plan?

“The success of President Obama’s strategy in Syria clearly depends on the ability of the Syrian Opposition Coalition and the Free Syrian Army to fight ISIS,” a pair of pro-interventionist analysts wrote for The Wall Street Journal  this week.

Word to the warmongers: You may be “glad” that your fear offensive succeeded in whipping the American people into a frenzy, but if you want to “take ISIS out” it’s becoming increasingly clear you’re going to have to do it yourself.

But you get the point …

Ron Paul: Will The Swiss Get Their Gold Back?