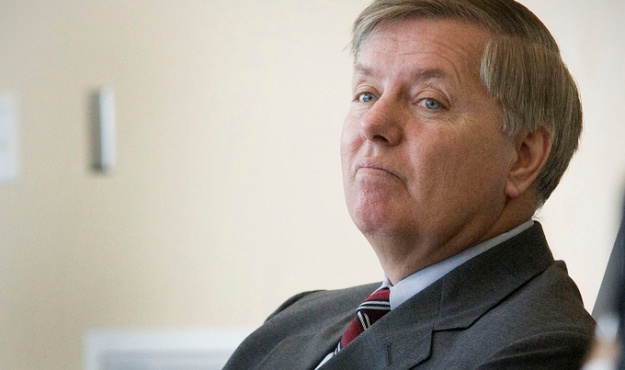 U.S. Sen. Lindsey Graham (RINO-S.C.) proudly announced this week that he will violate his pledge not to raise taxes on the American people.

“When you’re $16 trillion in debt, the only pledge we should be making to each other is to avoid becoming Greece, and Republicans — Republicans should put revenue on the table,” Graham said during his latest national television appearance.

Graham – who has previously supported energy tax hikes – later added his views regarding the the origin of America’s deficit problem.

Frankly, it’s astounding that Graham would say something like that.  America’s problem isn’t that it doesn’t “generate enough revenue,” it’s that its politicians – Republican and Democrat – don’t know how to stop growing government.  That’s why over the last four years the federal government has racked up more than $5 trillion in deficit spending.  In fact Graham has been among the most vocal champions of all that new spending – particularly as it relates to former GOP nominee Mitt Romney’s plan to appropriate $2 trillion in additional military funding over the course of the next decade.

In addition to supporting new spending, Graham is also no stranger to supporting tax hikes.  In fact he’s been promoting “revenue enhancements” for some time.

Even before the discussions over the approaching “fiscal cliff,” Graham was the lone “Republican” in Congress to back President Barack Obama’s massive proposed energy tax, dubbed “cap and trade.” He also joined with Democrats in proposing a massive amnesty program for illegal immigrants.

“GOP politicians vow to raise taxes – act like its patriotic,” Davis wrote on his Facebook page.  “We’re now completely through the looking-glass.”

Lindsey Graham and the rest of the U.S. Senators who are now going back on their word are a disgrace to taxpayers … however they are increasingly welcome in the “Republican” party.