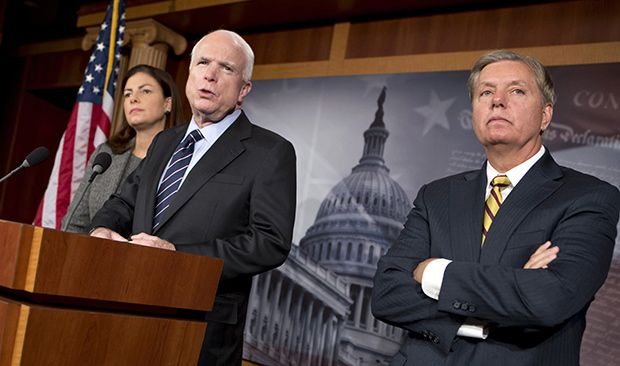 One of our favorite guest columnists, Amy Lazenby, has penned an articulate, well-researched and eminently sensible article as to why the federal government is violating the Constitution by denying due process to the surviving suspect in the Boston Marathon bombings.

In case you missed it, check out her must-read column by clicking here …

Not surprisingly this effort to impose “enemy combatant” status on 19-year-old Dzhokar Tsarnaev, who oh by the way is Civus Americanus, is being pushed by “neo-conservative” whores like U.S. Senators John McCain and Lindsey Graham – who just last month launched a scathing attack against their colleague Rand Paul for having the audacity to oppose drone strikes on U.S. citizens.

Once again, McCain and Graham are adopting a position that makes America less safe …

Well-fed by their corporate allies in the military-industrial complex, these guys want to spend trillions of tax dollars – and sacrifice thousands of American lives – by invading foreign countries (like Pakistan and, more recently Syria) on the thinnest of pretenses. But God forbid you disagree with those pretenses because that just means you hate America – and want to see it undone by evildoers.

Similarly, the decision to shred the U.S. Constitution by denying due process to American citizens apprehended in connection with crimes – however mundane or gruesome – is also not making us safer. Why not? Because as soon as we heard Graham’s call for “enemy combatant” status regarding this suspect we could feel our blood beginning to boil. And when federal law enforcement agents (initially at least) heeded Graham’s call and refused to advise Tsarnaev of his rights under the law as an American citizen, we could feel that boil running over.

Fortunately for Graham and cowards of his ilk we’re pacifists (until a certain threshold of provocation is reached, anyway). We prefer civil disobedience and a defensive posture to more offensive measures. And unlike Graham we respect innocent life.

But there are a lot of people who aren’t pacifists – or whose threshold for provocation is much lower than ours. And not all of these people respect innocent life (to the extent any of us are really innocent).

Which brings us to an incredibly dangerous bottom line: By adopting this unconstitutional position the federal government has not made America safer, it has made us less safe … again. In fact its decision will no doubt spawn new armies (and incense existing ones) whose leaders will conclude – rightfully, we might add – that there is nothing to stop the government from assigning such status to any citizen under any circumstances it wants.

Translation? We are all enemy combatants – if the government decides to label us as such – and therefore we are all potentially targets of enhanced interrogation techniques (or drone strikes) based on illegally obtained intelligence.

Again, as we’ve stated before we have no problem with using these measures on foreign nationals with documented ties to terror organizations – but not American citizens.

And while it’s easy to say such deprivals of liberty would “only affect people proven to be plotting mischief,” such statements neglect to mention that the establishment of proof cannot exist independent of constitutionally guaranteed due process.

Or that “mischief” is whatever the government wants it to be …

Stripping liberty will never make America safer. In fact, actions such as those taken by the federal government in response to the Boston bombings are why people want to bomb us in the first place.

America At Its Best … And Worst