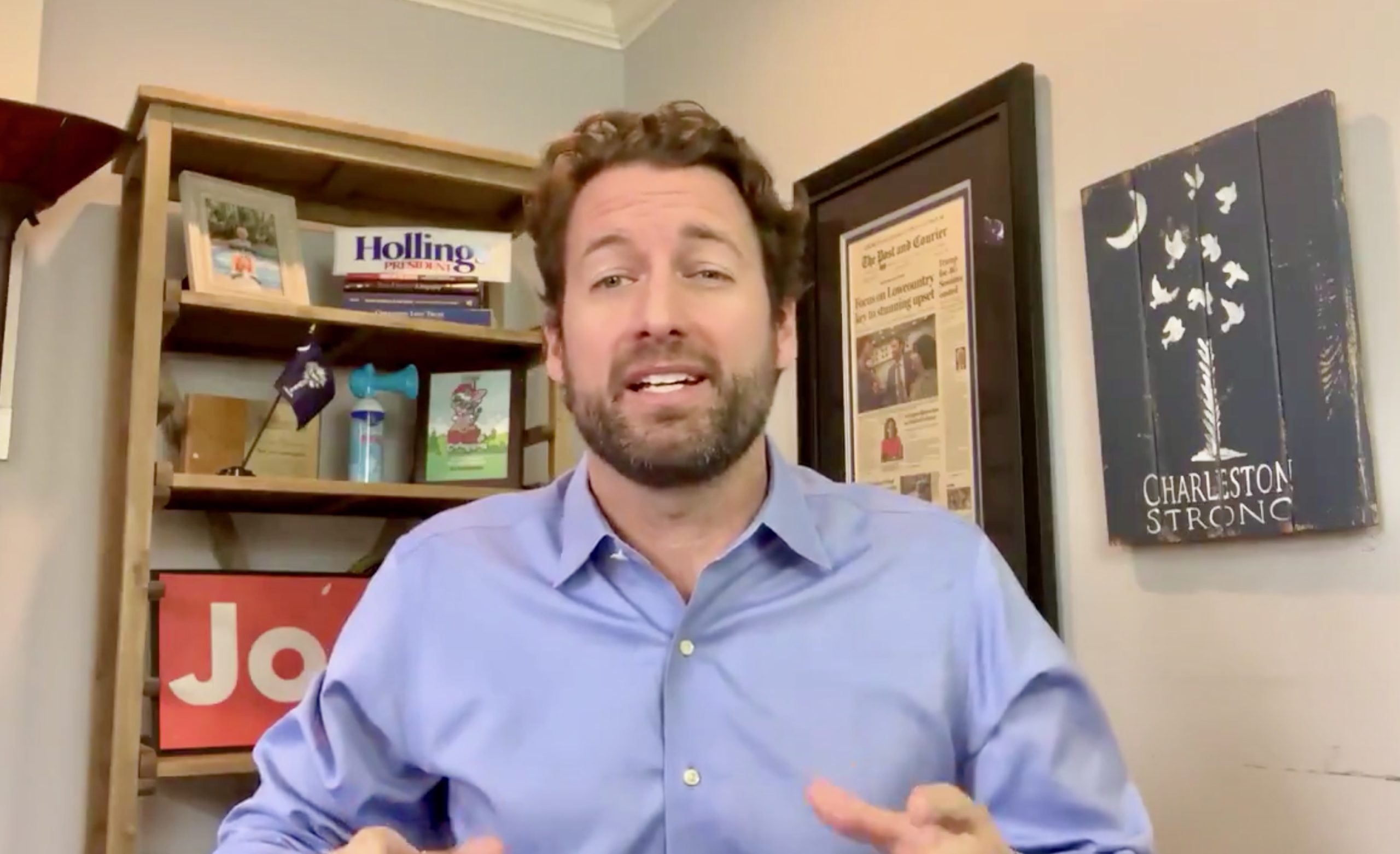 Former U.S. congressman Joe Cunningham of South Carolina is running for something in 2022 … likely governor of the Palmetto State. But that’s old news. Newer “news?” Cunningham’s attempt to address the problem of how he can remain relevant between now and then.

His answer? A podcast.

That’s right. Cunningham launched a podcast this week entitled “Joint Resolution,” a bro-tastic production which endeavors to position him as a moderate voice in an era of “hyperpartisanship and tribalism.”

And yes … this was apparently the “big announcement” he teased over the weekend with Palmetto political reporters.

Certainly we accept Cunningham’s premise that America is hyperpartisan and tribal. We have been writing about that for the past four years. In fact don’t look now but things are becoming increasingly tribal within the two-party structure (see here and here).

But wait … wasn’t Cunningham part of the tribal problem during his time in congress? In fact, isn’t that one of the reasons he got beat?

“My service to South Carolina is just getting started and I will be sharing my plans for 2022 very soon,” Cunningham tweeted in conjunction with his big reveal. “In the meantime, I hope this podcast gets people thinking and talking about how best to come together and tackle the enormous challenges ahead of us.”

Or … we can all just “bro out” like wanna-be cast members of Southern Charm.

Not everyone was impressed, though … especially given the superfluous hype ginned up by Cunningham’s team over what amounted to a relatively insignificant announcement.

“I swear, if this is some podcast tease,” Associated Press reporter Meg Kinnard tweeted late Sunday after Cunningham previewed his “big announcement.”

Which, obviously, was exactly what it was …

Kinnard wasn’t the only one who sniffed out Cunningham’s “big announcement.”

“Joe, you’re one of my favorite politicians in South Carolina. Please don’t be a typical white guy in politics and announce a podcast,” tweeted Upstate Democrat Jalen Elrod.

While Kinnard was busy calling Cunningham out, other South Carolina reporters were a bit more … taken with his idea (ahem, ahem).

One even gushed that it was “cheeky.”

“Cheeky,” we presume, like when Cunningham cracked a beer on the floor of the U.S. House of Representatives during his farewell speech – one of many “bro-dacious” publicity stunts he engaged in over the years in an effort to appear as though he’s something he’s not.

So … what is the long-term political efficacy of Cunningham’s podcast? Limited to nonexistent.

“Doing this is smarter than running for statewide office – because he’d lose,” one Palmetto politico told us. “Maybe he just wants to be another Beto.”

That’s a reference to former U.S. congressman Beto O’Rourke of Texas, who flamed out spectacularly in his bid for the 2020 Democratic presidential nomination.

“I just think it’s ridiculous that the newbie reporters in this state play right into it,” the politico we spoke with continued. “And their editors allow it.”


Republicans – who dominated at ballot box last fall – jumped on Cunningham’s announcement as the latest example of a vanquished Democrat launching a podcast in the hopes of retaining their lost relevance.

“We appreciate SCGOP officials and grassroots efforts for inspiring creativity across the state – especially the creation of so many new podcasts,” a tweet from the S.C. Federation of College Republicans joked.

Just last week, former S.C. senator Vincent Sheheen – who lost his S.C. Senate seat in November – announced he was joining another former Democratic lawmaker in launching a podcast. Their show is entitled “Bourbon in the Back Room,” which pretty much sums up the last two decades of “Republican” rule in the Palmetto State (as well as the decades of Democratic rule which preceded it).

Whether it’s beer or bourbon, South Carolina’s creativity-challenged Democratic has-beens might want to stock up on their adult beverage of choice … because our guess is they’re going to need a lasting buzz to navigate the down slope of their political careers.

Same goes for those unfortunate to tune in to this drivel …