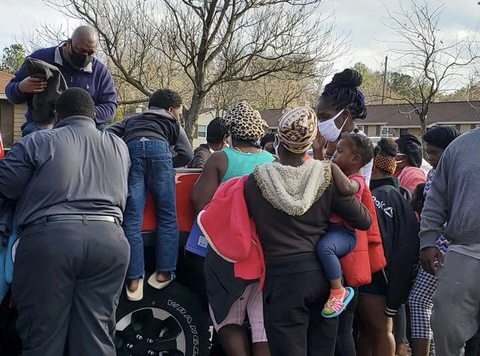 In January, parents and stakeholders in the Richland County School District One were furious to find out the district spent $700 on seven $100 Nike jackets for board members.

In a district with more than 50 percent of students living in poverty in the greater Columbia, South Carolina area, spending that kind of money on jackets seemed absurd. They saw it as a symbolic move indicative of the board’s fiscal irresponsibility.

So the administrators of the Friends of Richland One Facebook page — a social media group advocating for positive change in the district — decided to show school board members how much good they could have done with that money.


In the months since the #JacketGate scandal broke in January, Richland One stakeholders have collected more than 1,000 jackets and coats for children and families in the district.

On Wednesday, hundreds of Richland County families received coats at the #JacketGREAT event.

“The admins of the page, along with other community groups joined forces this year to make sure our students and families didn’t go cold during the winter,” Richland One community leaders told FITSNews. “We are all Friends of Richland one and together we can do great things.”

The #JacketGate scandal was a defining moment for Richland One in many ways. It was the tip of the iceburg, the straw that broke the camel’s back —the jacket that launched 1,000 jackets.

In January, commissioner Beatrice King held up the Nike windbreaker jacket that each of the board members received as gifts.

“I have questions regarding which money this came from,” King said. “This is a $100 jacket — and we have teachers that don’t have the money to buy paper or office supplies. This is concerning.”

In the meeting, Richland One board chairman Jamie Devine said the jackets were purchased “for spirit and camaraderie” for school board members to show their pride when they are out in the community.

Devine fiercely defended the purchase of the jackets in an op-ed printed in the State newspaper.

“The fact is that providing the jackets for board members was not ‘thoughtless’ — in truth, it was a thoughtful way for us to show support for the district in a prudent manner, while also promoting the district as our members travel throughout the district, state and nation,” Devine wrote.

Devine, who showed up to Wednesday’s event, said in his op-ed that Richland One is “good steward of taxpayers’ dollars.”

Financial responsibility (or a lack thereof) has been the primary focus of Richland One voters who have criticized the district. Parents believe too much money is being spent outside of the classroom — and test scores reflect this.

Just two days after we published our investigative story on “lavish” spending and lack of transparency at Richland County School District One (a story inspired by #JacketGate), the district held a red-carpet event that recorded a net loss of at least $20,937.12 in tax dollars, according to financial documents.

It was also revealed later this year — again, inspired by the #JacketGate scandal — taxpayers funded a massive $14,000 bill for legal fees to defend Devine for multiple ethics violations.

So, not exactly what we would call “good stewards of taxpayer dollars.”

It is very likely none of these stories would have come to light had it not been for #JacketGate.

“#Jacketgate really got people to pay attention to what was going on at Richland One,” one parent told us. “And we’ve done a lot of good since then.”

Here are just a few of the many stories we have covered on Richland One this year:

FITSNews will continue to report on the many issues facing the Richland One School District . You can submit your information through our tip line or by sending emails to our founding editor Will Folks (w@fitsnews.com) and to our news director Mandy Matney (mandy@fitsnews.com).