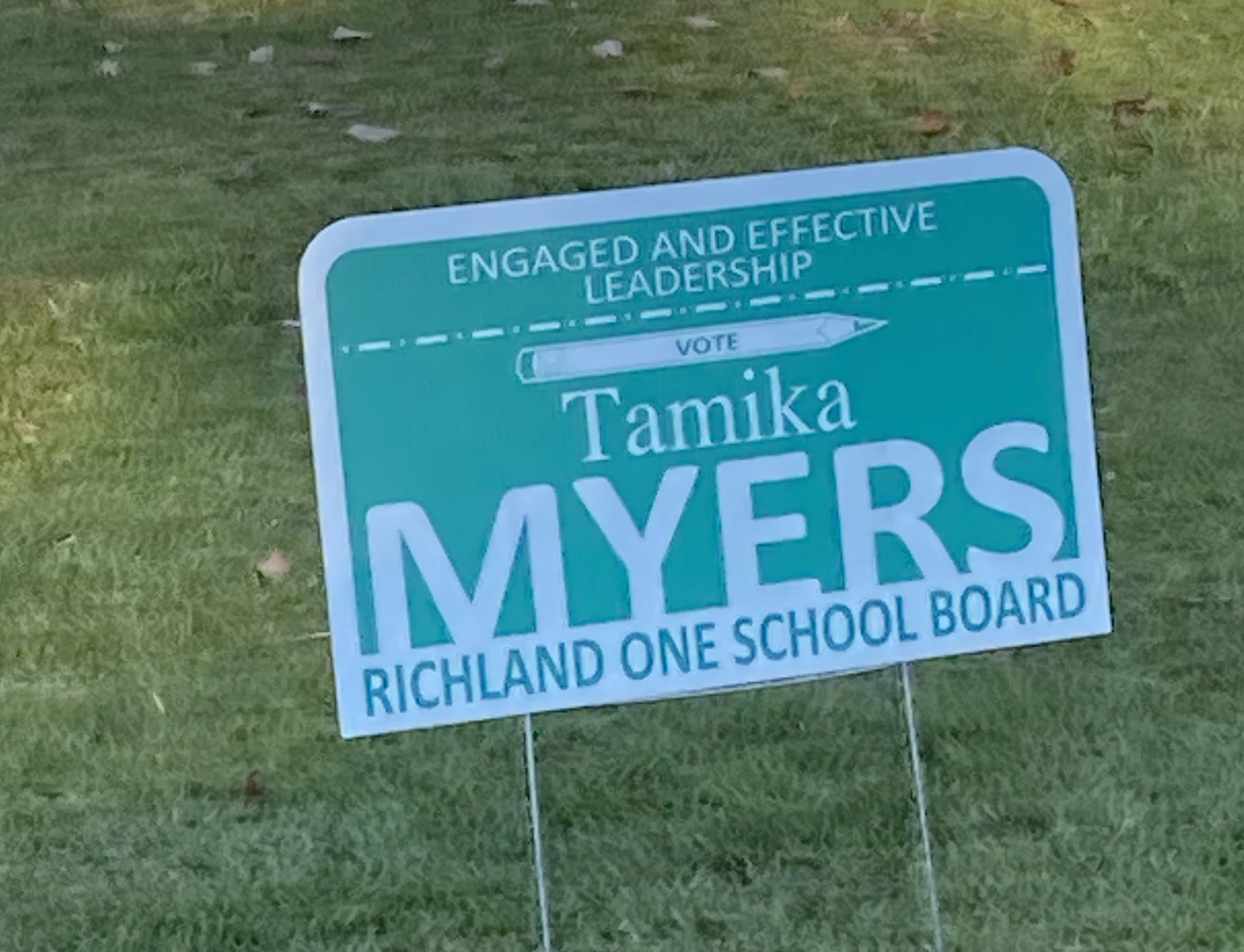 A Richland One school board candidate — who was virtually absent throughout the election season and pulled off a shocking upset in the district’s most competitive race — has released her campaign financial report, which shows she was the largest contributor to her own campaign.

Tamika Myers, who was one of six candidates vying for two at-large seats in the district, garnered a stunning 22,930 votes. Angela Clyburn, daughter of Congressman Jim Clyburn, swept the at-large race with a whopping 36,767 votes.

Myers and Clyburn, both political newcomers, ousted incumbent Jonathan Milling. Milling served on the school board since January after winning a special election in December 2019.

According to her campaign report, Myers raised $675 total in her campaign and she donated $285 of that money herself. Six other individuals donated to Myers campaign between September 20 and September 25, contributing between $25 and $150.


Myers spent $675 total on her campaign — the exact same amount as she raised — on signs purchased October 15 from Velvetrax on Shop Road.

Out of the six candidates running for the two at-large seats, Myers raised the second least amount of money. In fact, Milling raised 33 times the amount of money as Myers, while Raquel Thomas, who came in fourth, raised 14 times more than Myers.

Myers also released her statement of economic interests, which shows she is the owner of Perfect Choice Promotions LLC (as FITSNews previously reported).

Since our last report, FITSNews has learned more about Myers’ company and its government contracts.

As we previously reported, Myers’ company was scrutinized for its involvement in the Pinewood Lake Park scandal. Richland County hired a non-profit to manage the park and Myers’ company was contracted to do promotions for the foundation’s events.

According to a 2017 investigative story by Ron Aiken of Quorum Columbia, Myers started her company 11 days before she submitted her first invoice to taxpayers — $4,200 for promotions work with the park.

But it didn’t stop there.

According to Aiken’s reporting, Perfect Choice Promotions received a total of $104,117 in Richland County hospitality tax money from July 1 to December 26 2016.


“The payments… invite scrutiny both for the large amounts, the nature of the work, the lack of documentation provided for claimed expenses and the very businesses themselves,” Aiken wrote, referring to payments to Myers’ company and another company involved in the scandal.

The investigation found Myers’ company charged more than $1,800 for the design of the flyer and distribution of it on social media (shown below).

Quorum’s investigation found no receipts to support how exactly the $104,117 was spent.

Aiken also reported that Myers was fired from her job at the Richland County Recreation Department for “writing a contract she wasn’t authorized to and using her own name to let a customer use her employee discount,” according to multiple sources.

Myers and Clyburn were both sworn in as new board members at Tuesday night’s meeting.

Richland One is one of the largest school districts in SouthCarolina located in the greater Columbia area. It has an annual budget of more than $300 million in its efforts to educate more than 20,000 children.

The scandal-scarred Richland One school board has been rocked by controversy after controversy and allegations of misusing taxpayer funds this year.

In January, they spent $700 on seven jackets for school board members in a scandal referred to as “JacketGate,” which ultimately shed light on other examples of what many called excessive spending.

Just two days after we published our JacketGate story, the district held a red-carpet event that recorded a net loss of at least $20,937.12 in tax dollars, according to financial documents.

As spending items outside of the classroom have multiplied in Richland One, test scores have dropped.

As the new board moves forward without Jonathan Milling — one of two board members to consistently stand up against excessive spending — Richland One will need to be watched closely.

FITSNews will continue to provide watchdog journalism for Richland One. Stay tuned…