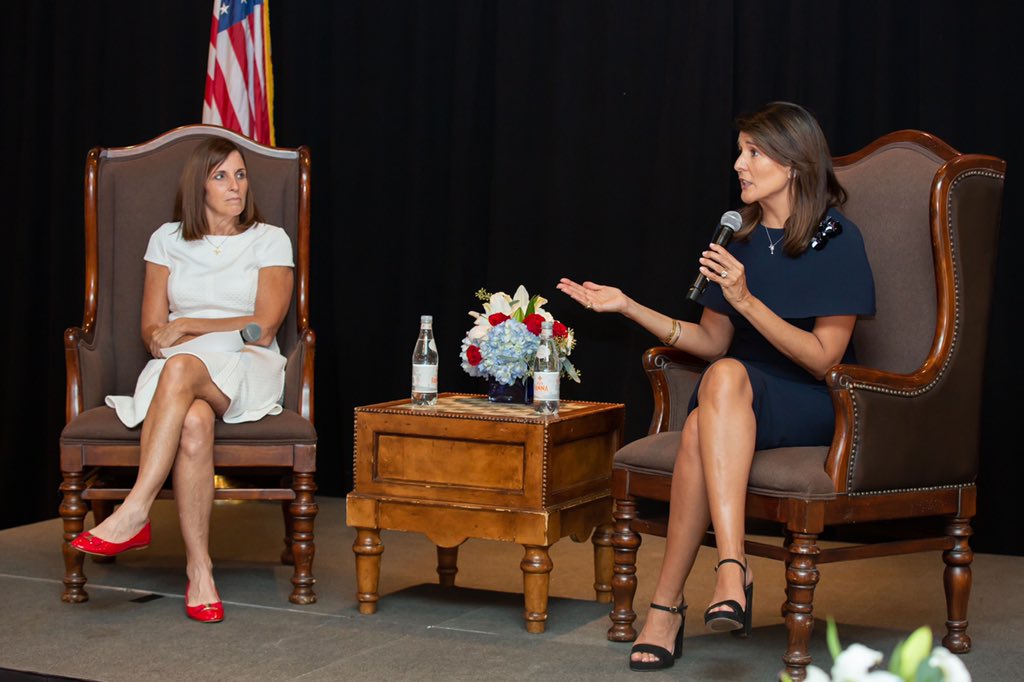 Decked out in a Tar Heel blue dress with rope pockets and matching heels, former South Carolina governor and U.S. ambassador to the United Nations Nikki Haley scanned the crowd of Republican stalwarts assembled in South Carolina’s second congressional district – one of the most die-hard GOP districts anywhere in America.

“Any questions?” she asked after offering her endorsement of its incumbent congressman, Joe Wilson.

“Any other questions?” Haley demurred, a knowing smile creeping across her face.

The 48-year-old then proceeded to tell the assembled crowd that she was focused exclusively on supporting the reelection of U.S. president Donald Trump and Republicans in contested races all across the nation.

And while it is certainly difficult (if not impossible) to take Haley at her word on that (or anything), no one can say she hasn’t been working overtime to support GOP candidates – including those in the Palmetto State.

Furthermore, few would argue that her advocacy is anything but a net positive in a general election in which suburban women are among the most prized of demographics.


In her home state, Haley has been one of the most vocal defenders of embattled U.S. senator Lindsey Graham – who finds himself locked in a surprisingly competitive race against Democratic lobbyist Jaime Harrison. In addition to helping Graham raise money, Haley has appeared in television commercials touting his record.

She has also appeared at events on behalf of congressman Ralph Norman – who is facing a credible challenger in his bid for a second full term representing the Palmetto State’s fifth congressional district.

The daughter of Indian immigrants has been all over the nation in the past few months, endorsing numerous GOP candidates in dozens of states. Her recent endorsements included a trio of candidates in Iowa, one of a dozen or so hotly contested swing states in next week’s presidential election.

Not to mention ground zero for the 2024 Republican presidential primary …

She has also traveled to early-voting New Hampshire to campaign for congressional candidates.

Within the last four weeks, Haley has campaigned on behalf of Republicans in Arizona, Georgia, Iowa, Montana, New Hampshire, Pennsylvania and Texas.

But it is Haley’s focus on early voting states – including the one she led for six years – that we believe is worth watching very closely as Republicans begin to assess the next national election.

Haley’s campaign push comes on the heels of her big moment at the 2020 Republican National Convention – which saw her receive plaudits from the mainstream/ “conservative” media as she planted her flag for the election to come.

Not everyone is on board with Haley’s ascension to the top tier of the 2024 presidential field, however.

Fox News’ host Tucker Carlson recently decried the former ambassador for engaging in “moral blackmail” in the aftermath of the George Floyd rioting.

Meanwhile, in the aftermath of her convention speech the authors at Revolver penned a brutally incisive critique which concluded that Haley would “do whatever it takes” to get the GOP nomination in 2024 – and that “conservatives should do whatever it takes to stop her.”

“Allowing Nikki Haley to become a leader in the Republican Party would be a return to Bush-era conservatism, defined by idiotic foreign adventures, empowering anti-American mega-corporations, and endless capitulation to the left’s inverted moral agenda,” the outlet wrote. “And for good measure, we’d still be led by a sleazy politician with a dirty personal life.”


Ideological centrists have also taken a dim view of Haley – mostly owning to her proximity to Trump (whom they loathe). Consider columnist Kathleen Parker of The Washington Post – who blasted the former ambassador last fall as “a cartoonish fussbudget” who “bought her own myth and sold it cheap.”

Our view? Clearly this news outlet has, um, “history” with Haley. And obviously we know better than almost anyone else the historical depths of her dishonesty, opportunism and hypocrisy.

Having said that, we plan on assessing her all-but-guaranteed 2024 presidential bid the same way we would assess the candidacy of any other politician – which is to say as objectively and dispassionately as possible.

Which brings us to this conclusion: Whether you (or we) like Haley or not, the fact remains she has earned her position in the 2024 top tier since she left Trump’s administration two years ago. And the work she is putting in ahead of the 2020 election – self-serving as it undoubtedly is – will only further cement her place in that field no matter who emerges victorious next week.

US Senate Confirms Amy Coney Barrett To The Supreme Court