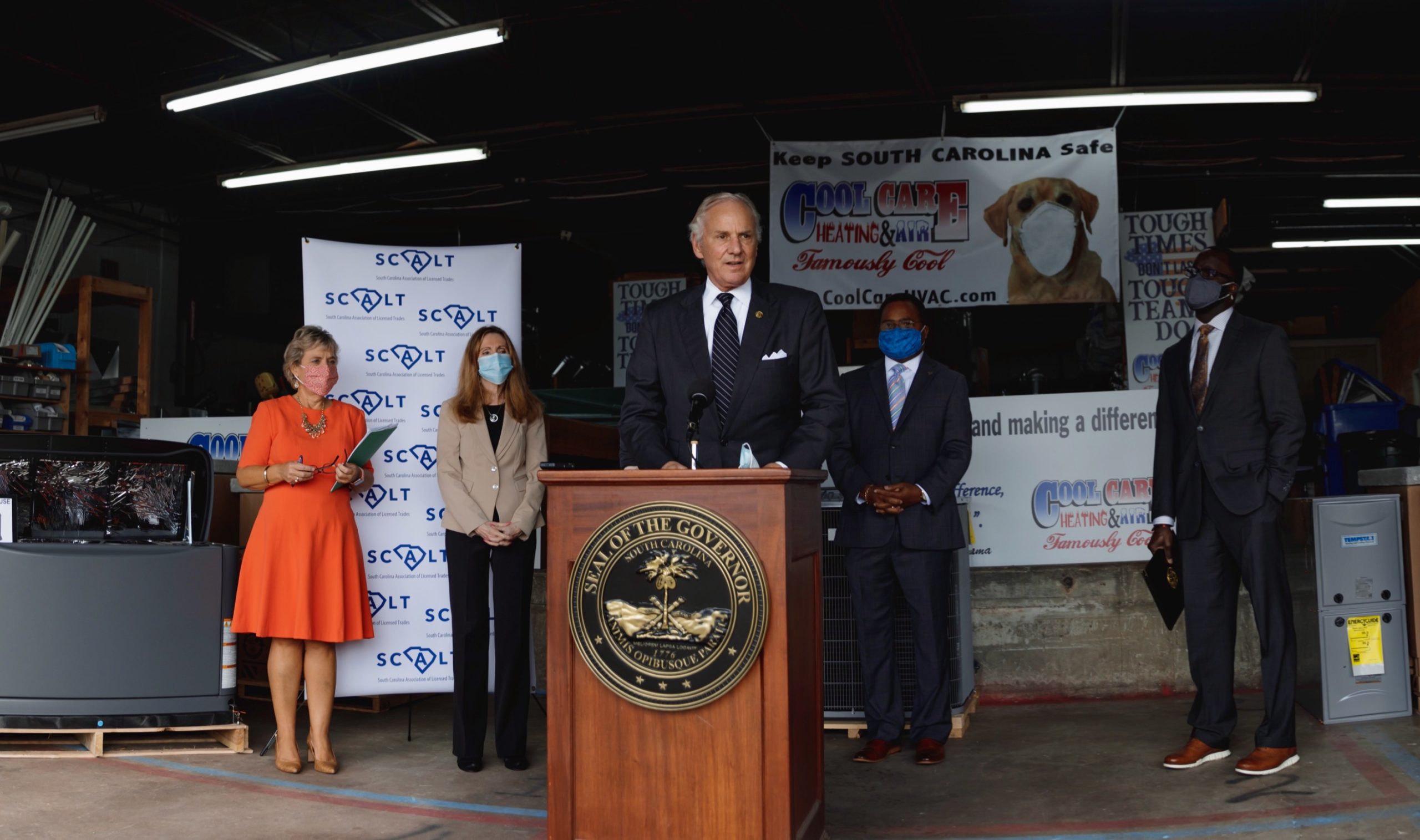 The last time we checked, South Carolina governor Henry McMaster was in serious political trouble following his uneven, hypocritical handling of the coronavirus pandemic and its subsequent societal shutdowns in the Palmetto State.

That trouble wasn’t isolated to a particular party or political ideology, either …

“On the ideological right, McMaster has been slammed for his initial embrace of draconian shutdown measures – efforts which appear to have only delayed the spread of the virus,” we wrote back in the summer.

On the left, McMaster was “castigated for failing to re-impose such measures” – and for refusing to impose a statewide mask mandate.

Meanwhile, his health agency remains an absolute goat rodeo … and a rudderless one at that.

By midsummer, we reported on the extent to which these failures had “begun to manifest themselves in terms of plummeting polling data.” Which would mean candidates in competitive elections in the Palmetto State probably do not want McMaster appearing alongside them this fall … right?

Makes sense to us … but multiple GOP activists and strategists who spoke with this news outlet tell us there is mounting frustration over the low-profile the governor is keeping this election cycle.

“He’s totally on the sidelines,” one Republican political strategist told us. “Quiet as a mouse.”


Supporters of Trump – who gifted the governor’s office to McMaster back in 2017 – seem especially incensed over his lack of participation in the current election cycle.

“It’s the fight of our lifetime and the governor is missing in action,” one Trump activist told us.

Another blasted the governor for failing to show his support for Trump on social media – accusing him of conducting a “vanishing act” in the weeks ahead of the election after previously peppering the airwaves with pro-Trump tweets and Facebook posts.

“Henry has disappointed a lot of real Trump supporters,” another Trump backer said. “He can barely muster a positive tweet supporting the President, and even then, it was a photo of himself.”

To what should we attribute McMaster’s “missing in action” status, though?

Is he simply not engaged? Or are candidates in close races not asking him for his help?

Legislative leaders tell us McMaster has been more than willing to get involved in races – marking a noticeable departure from the limited support offered by his two predecessors, Nikki Haley and Mark Sanford.

Haley and Sanford rarely engaged on the campaign trail in support of sitting lawmakers – and Haley frequently found herself working against legislative incumbents.

“If asked, he is ‘all in,'” one GOP leader told us – calling McMaster “the most helpful governor” since Carroll Campbell and David Beasley.

The problem? No one seems to want his help …

“I doubt he’s in high demand in competitive races,” one GOP lawmaker in a non-competitive district told us. “His numbers aren’t what they used to be.”

“He’s a net loss down here,” one Lowcountry GOP strategist told us bluntly, citing McMaster’s abysmal polling data in and around Charleston, S.C.

He is also weak in the Greenville area, a typical Republican stronghold.

The governor’s lack of engagement contrasts noticeably with the active involvement of Upstate businessman John Warren – who nearly defeated McMaster in the 2018 Republican primary (and who is reportedly eyeing another gubernatorial campaign against him in 2022).


Warren and his newly formed political organization – South Carolina’s Conservative Future – have been active in a number of competitive legislative races across the state. His group has even gotten involved in several S.C. Senate races where the Republican caucus (or whatever it is calling itself these days) failed to provide much in the way of support to GOP candidates.

Obviously Warren’s elevated status on the campaign trail will likely accrue to his benefit heading into the 2022 cycle … but that benefit could be compounded thanks to McMaster’s disappearing act.

For now, the contrasting optics are terrible for the incumbent …

Our view? McMaster’s conspicuous absence on the campaign trail is not surprising given the diminished support he is receiving from voters up and down the Palmetto State’s ideological spectrum. Similarly, it highlights how vulnerable he would be in the event he does decide to seek another four-year term in 2022 (as of this writing McMaster is a “go” for reelection).

Also, McMaster’s increasingly tepid support for Trump is worth watching closely considering it was the president’s intervention in 2018 that carried him to the GOP nomination over Warren.

The Oracle: Donald Trump By A Nose