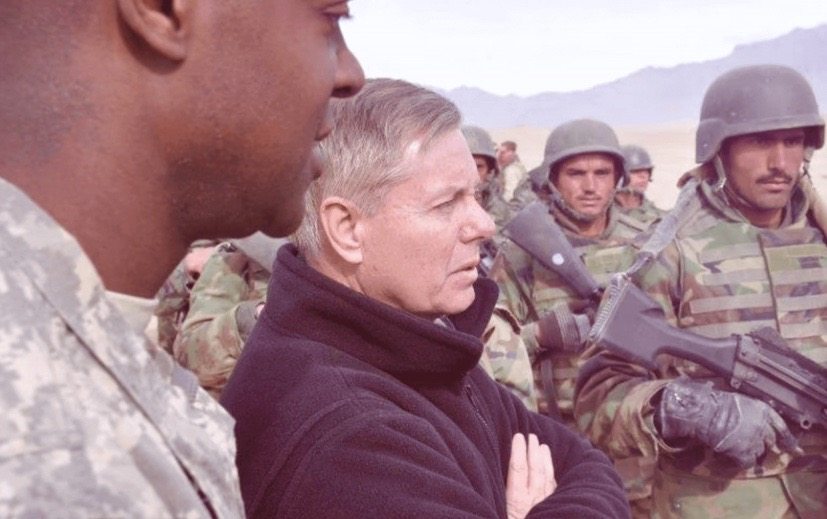 This week Graham’s military career is the focus of a much bigger story – in The Washington Post.  According to reporter Craig Whitlock, the 2016 presidential candidate received numerous promotions he didn’t deserve and boasted of duties he never performed.

(Oh, and all this is in addition to his previous tall tales).

Graham is running as a ­national-security hawk, calling himself a “battle-tested leader” with “a lifetime of military service.” Images of him wearing camouflage in the field are a common thread in his campaign.

But a detailed examination of Graham’s military record — much of it obtained under the Freedom of Information Act — shows that the Air Force afforded him special treatment as a lawmaker, granting him the privileges of rank with few expectations in return.

During his first decade in Congress, the Air Force promoted Graham twice even though documents in his military personnel file reveal that he did little or no work. Later, the Pentagon gave the military lawyer a job assignment in the Air Force Reserve that he highlighted in his biography for several years but never performed.

Graham told Whitlock he would put his military record “up against anybody who’s ever served.”

“I don’t mean to pat myself on the back, but I was one hell of a judge advocate,” he said.

From 2006 until the start of this year, Graham’s official biographies stated that he worked as a senior instructor at the Judge Advocate General’s School at Maxwell Air Force Base in Montgomery, Ala., the training hub for the service’s legal corps. That description has been cited in virtually all news coverage of Graham’s military career.

In fact, Air Force officials said they had no record of Graham teaching any courses on behalf of the school or even visiting it during that period.

Other uniformed lawyers said Graham’s assignment was widely perceived as a no-show job granted to a politician with whom the Air Force brass was eager to curry favor.

“It was kind of an open joke among people, that he was supposed to be a senior instructor here but he never taught any classes,” said an active-duty Air Force lawyer who spoke on the condition of anonymity out of fear of retaliation. “Clearly, the rules didn’t apply to him.”

Graham is polling at less than one percent nationally – and his White House bid is currently polling in seventh place in his home state, supported by just 4.9 percent of South Carolina “Republican” voters.

In response to the Post article, Graham spokesman Christian Ferry released a fundraising appeal claiming his boss was the victim of a “political hit job.”

“Using anonymous sources and salacious headlines, The Washington Post ignored the truth of Senator Graham’s honorable service in the United States Air Force,” Ferry wrote.  “The Post did not highlight the glowing, on the record comments from Senator Graham’s senior officers who described Senator Graham as ‘a national treasure.'”

Ferry went on to say the article was “journalism at its worst” and more of “what we have come to expect from the mainstream media against Republican candidates.”

Really?  Last time we checked Graham was no more a “Republican” than he was a soldier …