The Lowcountry lawmaker will be the guest of honor at a big ticket fundraiser in Columbia, S.C. on Tuesday evening. 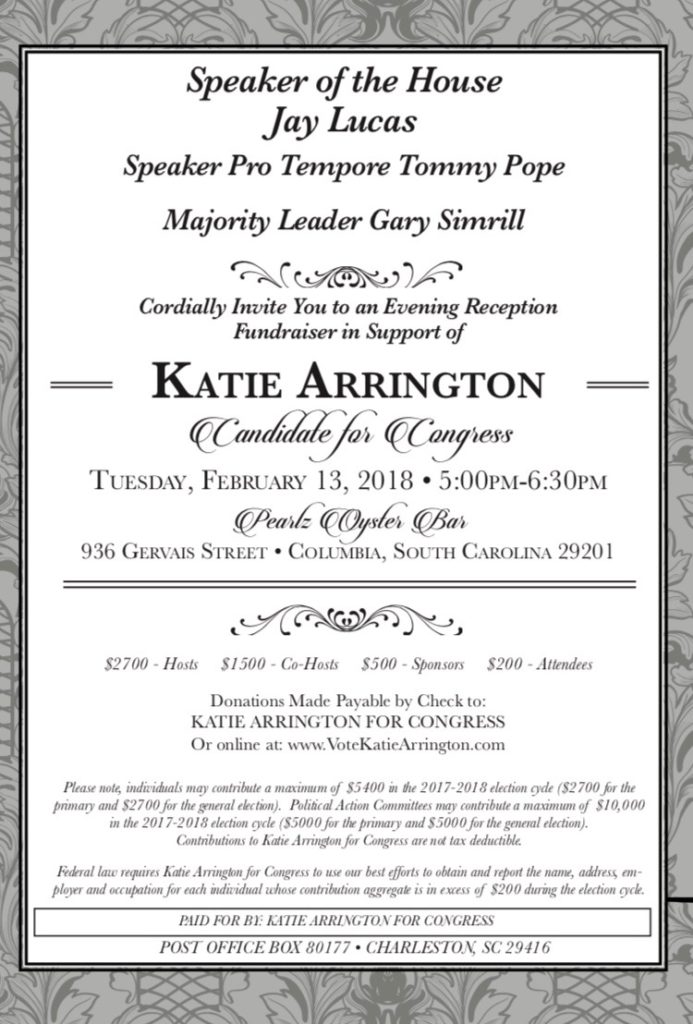 That’s some serious firepower … and Arrington is going to need every bit of it (and more) if she hopes to upset Sanford, who is exceedingly vulnerable following an underwhelming showing in the GOP primary for this seat two years ago.

The former two-term South Carolina governor – one of the most prominent #NeverTrumpers in congress – enjoys a sizable cash advantage over his challenger as this race hits its homestretch.  According to the latest documents filed with the Federal Election Commission (FEC), Sanford had $1.5 million in his campaign finance account compared to Arrington’s $210,000.

That’s the bad news for Arrington.  The good news?  She’s out-raised Sanford in each of the last two fundraising quarters, and this week’s haul – combined with a successful event held in Washington, D.C. earlier this month – could go a long way toward making it three quarters in a row.

Arrington, 46, has been running a smart campaign against Sanford -providing voters with a clear contrast to the third-term incumbent.  Among other savvy moves, she has staked herself out to the same term limit pledge Sanford made decades ago when he first ran for Congress.

Sanford has long since abandoned term limits – both for himself and his status quo colleagues in our nation’s capital.

Arrington has also vowed to refuse congressional health care and retirement benefits – and to accept only the median household income of the first congressional district ($52,000) as compensation in the event she is elected.

Sanford?  Sadly, he has become just another corporate sellout – one who is desperate to stay in Washington, D.C. for as long as he possibly can.  The 57-year-old career politician is so desperate, in fact, he’s allegedly been using taxpayer resources on his campaign.  That’s sad, but it probably shouldn’t come as a surprise to anyone after he used state tax dollars on an extramarital affair with his erstwhile “soulmate,” Maria Belen Chapur.

Arrington is the only announced challenger to Sanford in this year’s GOP primary – which will be held on June 12.  Attorney Joe Cunningham is seeking the Democratic nomination for this seat (map), and is expected to provide the Palmetto State’s perpetual minority party with a real shot at winning this seat in the November general election (assuming Sanford is the “Republican” nominee, anyway).

This is due in no small part to Sanford’s proximity to #NukeGate – a mushrooming political scandal related to state government’s abandonment of a multi-billion nuclear power project.  In 2007, Sanford – then in his second term as governor – allowed a bill socializing the investment risk for this controversial project to become law without his signature, exposing ratepayers to nearly $2 billion (and counting) in payments toward a pair of nuclear reactors that are now unlikely to ever be built.