The latest?  According to reporter Glenn Smith of The (Charleston, S.C.) Post and Courier, Wilson used a private email account to share details of the ongoing investigation with one of its subjects – his longtime political advisor, Richard Quinn.

Specifically, emails uncovered by The Post and Courier show Wilson collaborating with Quinn on the former’s efforts to remove a special prosecutor who had begun to dig into their various machinations.

Those exchanges took place after Wilson had publicly recused himself from the case – and instructed his office to “firewall” him from it.

In other words, while he was telling the public (and those in his office) that he was staying out of the investigation, Wilson was privately corresponding with one of its targets – providing him with confidential information and conspiring with him on how to obstruct it by removing the man who was investigating them.

Unbelievable?  Yes … and no.

Those who have followed this case for years said The Post and Courier story merely “confirmed everything we already knew.”

“This is nothing new in the AG’s office,” a source close to the investigation told us. “Quinn has been running that place for years.”

Indeed he has … which is why the fallout from this scandal could ultimately extend far beyond Wilson.

Once a frontrunner to become the Palmetto State’s next governor, Wilson’s career imploded last year when tried and failed to shut down this investigation – which has drawn a bead on his closest political allies.

Previously, Wilson championed the probe – which was initiated by the Quinns and their allies as a way of taking down one of their top “Republican” political rivals, former S.C. speaker of the House Bobby Harrell. 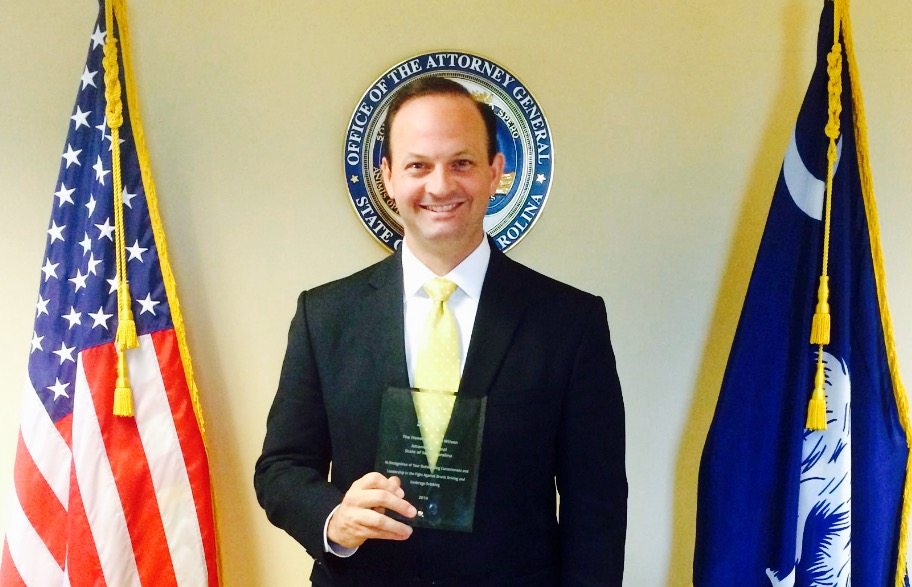 They succeeded in their goal … but in the aftermath of Harrell’s resignation on ethics violations back in October of 2014, the investigation began to focus on far graver misdeeds allegedly perpetrated by those who engineered Harrell’s downfall.

As we exclusively reported at the time, that’s when Wilson’s tune began to change …

(To read our more detailed exclusive report from February on how the “hunters became the hunted” in this story, click here).

Without offering an explanation, though, Wilson barred Pascoe access to the grand jury.  Then he fired him – and attempted to replace him with a different prosecutor (one who declined to take the job).  Next, Wilson clumsy attempted to politicize the case – angrily (and baselessly) attacking Pascoe’s integrity without so much as a shred of evidence.

This website took a dim view of Wilson’s meddling …

“Wilson is no longer committing sins of omission he is actively committing what looks like a textbook case of obstruction of justice – abusing the power of his office in an effort to shut down an investigation that’s swirling around his closest political confidants,” we wrote last March in a post calling on the attorney general to resign his office.

Fortunately, Pascoe took the case to the Supreme Court – and won.

Since then he’s issued indictments on three sitting legislative leaders with ties to Quinn – including the consultant’s son, state representative Rick Quinn.  Not only that, Pascoe has apparently been doing some digging into what may have prompted Wilson to attempt such obstruction in his role as attorney general.

As for Wilson?  Not only have his gubernatorial dreams been dashed – he is struggling to raise money for his reelection as attorney general.

In addition to the dubious emails, the Post and Courier report also revealed that at least three members of Wilson’s staff were receiving paychecks from Quinn’s firm while they were ostensibly working full-time in the attorney general’s office.

One of these employees, Adam Piper, was a central figure in Wilson’s failed attempts to kick Pascoe off the case.

Neither Richard Quinn, Wilson nor Piper have been indicted yet in connection with Pascoe’s investigation – which recently survived yet another attempt to see him removed from the case.  Rick Quinn has been indicted on a pair of misconduct in office charges, while Richard Quinn was named in a three-count indictment of S.C. Senator John Courson, who is accused of accepting kickbacks from the consultant.