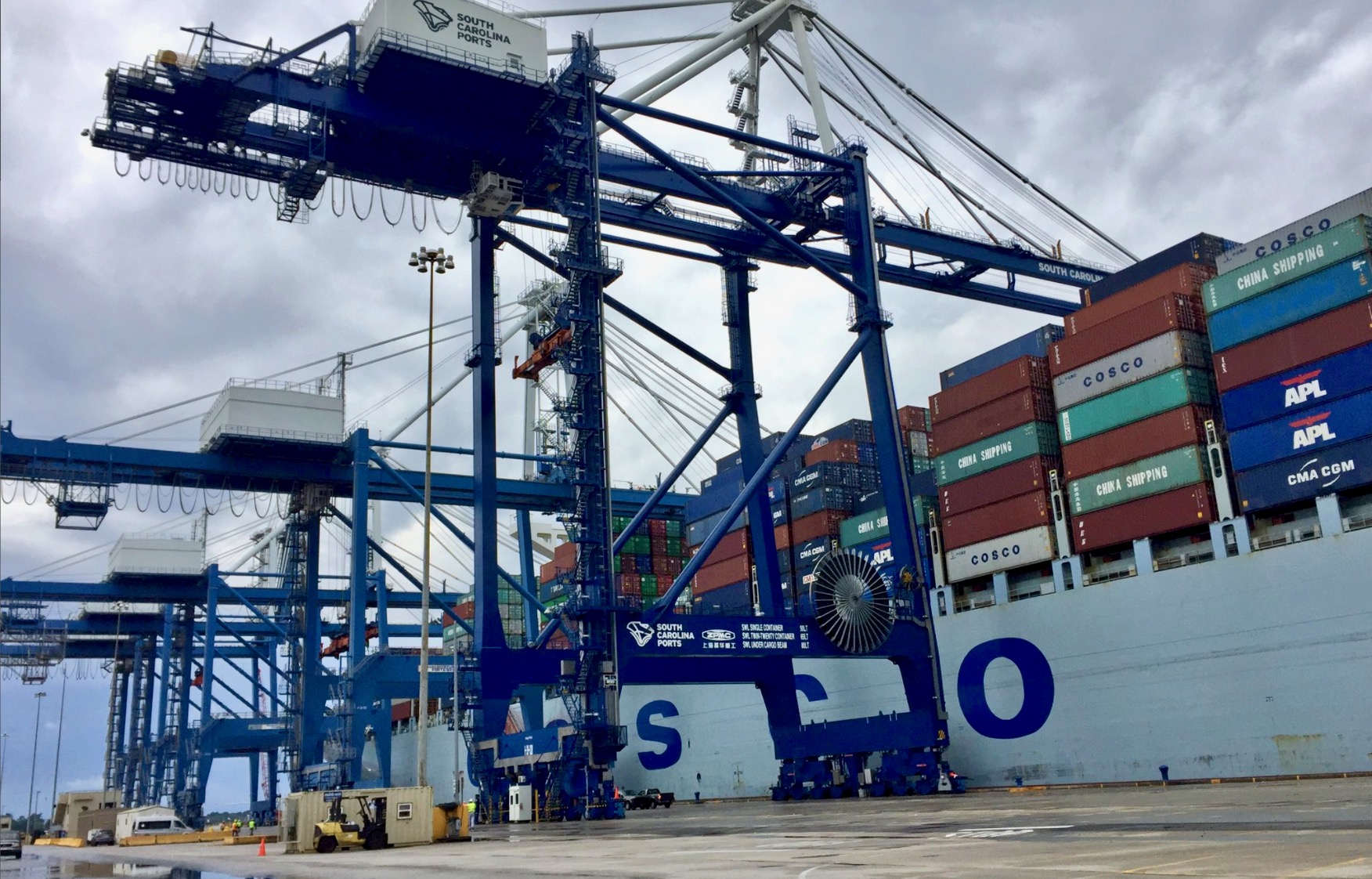 The port of Charleston, S.C. welcomed the Cosco Development this weekend – the largest ship ever to come calling on the east coast.  The massive 1,200-foot vessel – capable of hauling up to 13,092 twenty-foot equivalent (TEU) containers – arrived in Charleston harbor on Saturday morning after successful calls in Virginia and Georgia.

The big boat is scheduled to depart from the S.C. Ports Authority (SCPA)’s Wando terminal on Sunday after it’s been offloaded – and then loaded up with export containers.

“SCPA has worked aggressively for years to ensure we can efficiently work 13,000 twenty-foot equivalent unit (TEU) vessels and be the last Southeast port of call with no navigational issues,” Jim Newsome, SCPA president and CEO, said recently in anticipation of the Cosco Development’s arrival.

The boat’s arrival is both a blessing and a curse for port officials.  On the one hand, it’s an opportunity for the much-maligned SCPA and its partners to showcase their ability to efficiently move freight on and off one of the biggest ships in the world.

The Cosco Development is the largest ship ever to pass through the recently widened Panama canal – and its arrival on the east coast heralds a new era in global shipping.

On the other hand, assuming the boat comes and goes without a hitch – that would be yet another reason to question the efficacy of a proposed harbor deepening plan (one we’ve previously noted is of dubious economic benefit).

Ironically, Georgia’s harbor expansion plan – which has more support at the federal level – would now seem to be every bit as unnecessary as Charleston’s given the port of Savannah’s successful handling of this big boat.

Bye #COSCO Development! We were happy to host the largest ship to ever call the East Coast. Thank you for the 5,500 container moves! pic.twitter.com/5MO8wYWPrS

Needless to say, we’ve been keeping close tabs on this vessel as it makes its east coast calls – and look forward to providing our readers with detailed information on how each harbor handled her arrival and departure.

As we’ve previously reported, Georgia and Virginia have been actively collaborating in anticipation of an upcoming realignment of the global shipping industry – one which threatens to further undermine South Carolina’s declining competitiveness.

Once the fourth-busiest port in America, Charleston is in real danger of losing additional competitive ground as the world’s major shipping providers undertake a fundamental reconfiguration of this industry.  Three new international shipping alliances – which control an estimated 90 percent of global maritime traffic – are currently reconfiguring their trade routes.

How will the Palmetto State be impacted?

According to a recent report from Drewry, a London-based maritime research firm, Virginia and Georgia will each receive an estimated 20 inbound and 20 outbound calls per week from vessels affiliated with one of the big three alliances.

Charleston will receive only around 14 inbound and 14 outbound calls per week from alliance vessels.

Wow! Check out the view from the Charleston Harbor Pilots boat! The largest ship to ever call the Port of Charleston. pic.twitter.com/vhLNsl9CNn

We’ve argued one of the keys to restoring South Carolina’s competitive position is getting rid of its current management model – in which a bunch of bickering government appointees run the port – and moving to a landlord-tenant arrangement.